6 Fun Things to Do in St. Louis This Weekend 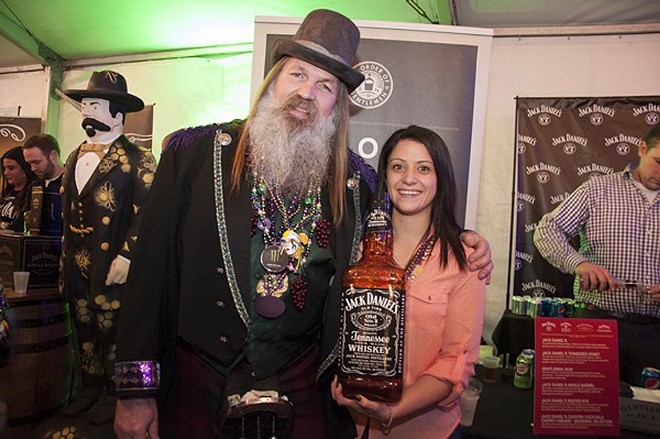 Wine, whiskey and song — this weekend's got it all going on! Head to Soulard Market Park tonight to chow down on barbecue and try more than 50 beers, wines and whiskeys. Or mosey on over to City Museum and catch its in-house troupe, Circus Harmony, showing off its stuff. There's a ton more, too, so read on for all the highlights.

Interested in art galleries instead? We've got the details on four great openings as well.

1. Get a taste of the good stuff in Soulard


Mardi Gras is just over the next hill — are you prepared? If not, you can do some training at the L'ecole Culinaire Wine, Beer and Whiskey Taste. You'll get to sample more than 50 wines, beers and whiskeys from 7 to 11 p.m. tonight at the Bud Light Party Centre in Soulard Market Park (Lafayette Avenue and South Ninth Street; www.mardigrasinc.com). Sommeliers and cicerones (that's a beer genius, if you didn't know) will be present to explain what you're drinking and where it comes from, and barbecue treats from Pappy's, Salt + Smoke and Sugarfire Smokehouse are included in the ticket price ($40 to $50). If you're still unsure, consider this: Anheuser-Busch will be sampling an "unnamed, experimental product" during the event. There's only one way to find out what that beverage is.

Big Muddy Dance keeps the "contemporary" in contemporary jazz dance with Mud Tracks, a show packed with premieres. The company unwraps its first production of artistic director Brian Enos' Diphthong, which is set to the music of Zap Mama and was originally created for Chicago's Hubbard Street Dance. Chicago dancer Autumn Eckman has choreographed a new piece for the troupe, while company dancers Thom Dancy and Dustin Crumbaugh will both perform a piece that is new to Big Muddy's repertoire. But the centerpiece is a new work created by Josh Manculich, who won a Princess Grace Choreography Fellowship in 2015. Manculich was in fact nominated for the award by Big Muddy Dance, so it's fitting that St. Louis would be first to see the piece. Mud Tracks is presented at 8 p.m. Friday and Saturday (January 22 and 23) at the Pageant (6161 Delmar Boulevard; www.thepageant.com). Tickets are $22 to $25.


Internationally, the guitar is often considered the essential instrument for tango, but in Argentina you're not tangoing until someone breaks out the bandoneon. The squeezebox instrument has a plaintive, yearning tone when played by a master such as Cesare Chiacchiaretta. Together with the gifted guitarist Giampaolo Bandini, Chiachiaretta coaxes aching desire out of his instrument while performing the music of Ástor Piazzolla and other Argentinian greats. Even their silences are dramatic, as heard on the Duo Bandini-Chiacchiaretta rendition of Gerardo Matos Rodríguez's familiar "La Cumparasita" — they hang so long on the pause before the final refrain you find yourself leaning forward in anticipation. The St. Louis Classical Guitar Society presents Duo Bandini-Chiacchiaretta tonight at 7:30 p.m. at the Sheldon (3648 Washington Boulevard; 314-533-9900 or www.thesheldon.org). Tickets are $26 to $30.

Turn the page for more great events in St. Louis this weekend 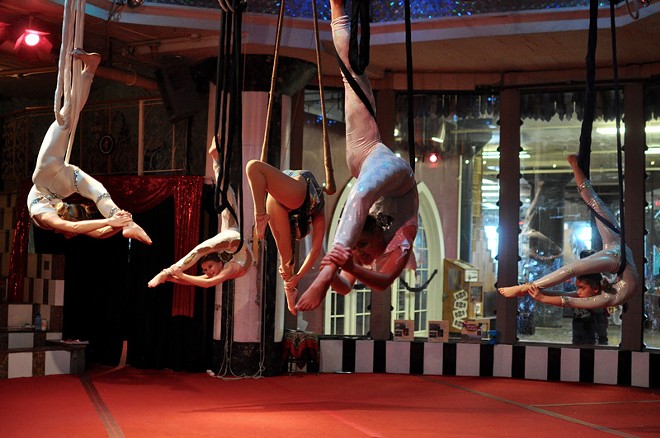 Where do kids from south city, the counties and the northside get together on a daily basis? At Circus Harmony, of course. The circus school based at the City Museum teaches kids traditional circus arts, but it also teaches them about themselves — and others. You can see what they've learned at Circus Harmony: Giocoso. The name comes from an Italian musical term for "joyful," which is the only way these youthful acrobats, contortionists, wire-walkers and unicyclists know how to perform. Prepare to be amazed, and not just by the daring on display — the Circus Harmony Band plays everything from traditional circus music to klezmer. Giocoso is performed at 2 and 7 p.m. Saturday and 2 p.m. Sunday (January 23 to 31) at the City Museum (750 North Sixteenth Street; 314-436-7676 or www.circusharmony.org). Tickets are $20.


5. Learn about St. Louis history at the theater

John Banvard had great artistic ambition, channeling his fascination with the Mississippi River into a landscape painting that he claimed was three miles long. (Experts now believe it was at most a half-mile long, which is still impressive.) Banvard mounted what he called his "georama" on rollers like a scroll, and would unspool it slowly so audiences could see what a cruise down the Mississippi looked like. His vision made him the toast of the 1800s, but imitators threatened to push him out of the market he created. West Hyler and Matt Schatz turned the true story of an American original into the musical Georama, which gets its world premiere at the Repertory Theatre of St. Louis. A 600-foot-long georama was created especially for this production, which runs Tuesday through Sunday (January 23 through February 7) at the Loretto-Hilton Center (130 Edgar Road, Webster Groves; 314-968-4925 or www.repstl.org). Tickets are $50 to $65.


Guglielmo and Ferrando are soldiers currently set to marry a pair of sisters, Fiordiligi and Dorabella. Their older pal Don Alphonso warns them that women are not capable of being faithful, and proposes a test. The boys should claim they're being sent off to war, but actually disguise themselves as rich Albanians and attempt to woo each other's fianceé. And so they do, but with some reservations. Mozart's two-act opera buffa Cosí fan tutte has enchanted and unsettled audiences for 225 years, thanks to its comic bits and its jaundiced view of women as fickle flirts. Winter Opera St. Louis continues its season with Cosí fan tutte at 8 p.m. Friday and 3 p.m. Sunday (January 22 and 24). Performances take place at the Skip Viragh Center for the Arts (425 South Lindbergh Boulevard, Frontenac; 314-865-0038 or www.winteroperastl.org), and tickets are $35 to $55.