8 Super-Fun Things to Do This Weekend in St. Louis

Baby, it's gonna be cold outside this weekend — but so what? The three-day stretch is full of things to do, from Schlafly's annual Cabin Fever outdoor drinkfest to the Cardinals Care Winter Warm-Up (get autographs for a good cause!)

Here are the eight things we're most excited to do this weekend in St. Louis. More interested in art? Here are all the details about those openings, too.

1. See a Play with Current Resonance


Kenyatta is a revered member of the Black Power movement who has sacrificed any sort of real relationship with his family in his pursuit of social justice. His estranged wife Ashanti has recently died, and Kenyatta heads home at last to collect the letters she wrote to him, but never sent, while he was imprisoned. The only obstacle in his path is his adult daughter Nina, who resents him for abandoning her and ruining her mother's life. In short order Kenyatta learns that his reputation and street cred mean nothing to a woman who wanted a father, not a figurehead. Dominic Morisseau's Sunset Baby is about fatherhood, personal politics and the value of family — even when you don't want one. The Black Rep presents Sunset Baby at 7 p.m. Thursday, 8 p.m. Friday and Saturday, and 3 p.m. Sunday (January 15 to 31) at Washington University's Edison Theatre (6445 Forsyth Boulevard; 314-534-3810 or www.theblackrep.org). Tickets are $30. — Paul Friswold

Married life is not the bliss and contentment Lottie Wilton was promised. Her husband treats her like a child, and London is a smoggy, dreary place in the aftermath of World War I. Who can blame her for spending her savings to rent an Italian castle for a month-long vacation? But to get there she'll need partners, and so she recruits three strangers to help manage the cost. One is another unhappy housewife, one is a demanding older woman of certain means, and the final partner is a young flapper. Together the quartet embarks on the great adventure of abundant sun, handsome property managers and four blissful weeks without domineering husbands. Matthew Barber's play Enchanted April is based on Elizabeth von Arnim's 1922 novel, but modified slightly for stage and modern times. Kirkwood Theatre Guild presents Enchanted April at 8 p.m. Friday and Saturday and 2 p.m. Sunday (January 15 to 24) at the Robert G. Reim Theatre (111 South Geyer Road, Kirkwood; 314-821-9956 or www.ktg-onstage.org). Tickets are $20. — Paul Friswold


3. Meet Some Cardinals, for a Good Cause


Fact: Baseball spring training hasn't started yet. Fact: You bleed Cardinals red, even in the off-season. Fact: Cardinals Care Winter Warm-Up offers a great time to meet players, get autographs, help kids and add fuel to the baseball fire burning in your heart. So what are you waiting for? Head down to the Hyatt Regency St. Louis at the Arch (315 Chestnut Street) from 9 a.m. to 5 p.m. Saturday and Sunday and from 9 a.m. to 3 p.m. Monday (January 16 through 18) to find that warm home-run feeling inside when the weather is chilly outside. Three-day tickets cost $40 for those 16 and older, and your admission includes some free autograph opportunities; other autographs and food cost extra, as do Busch Stadium tours (which happen each day from 10 a.m. to 2 p.m.). For a full list of participating Cardinals, past and present, and for more information, visit www.stlcardinals.com. Proceeds benefit the Cardinals Care community foundation and its efforts to help area kids. — Alison Sieloff

Something magical happens whilst beer gently rests in your overfed winter's belly: pure happiness, nothing less and nothing more. But what more could you possibly want? At Cabin Fever at the Schlafly Bottleworks (7260 Southwest Avenue, Maplewood), you'll experience that blissful, fleeting feeling after you've gotten the you-know-what out of your cluttered, claustrophobic house and sampled eighteen two-ounce pours of Schlafly beers. Yeah, that sounds magical indeed. Cabin Fever runs from noon to 4 p.m. Saturday, and tickets cost $30 to $35 at www.schlafly.com. Live music by ClusterPluck should keep your ears toasty, but you also will probably want to dress warmly for this outdoor beer fest. — Alison Sieloff 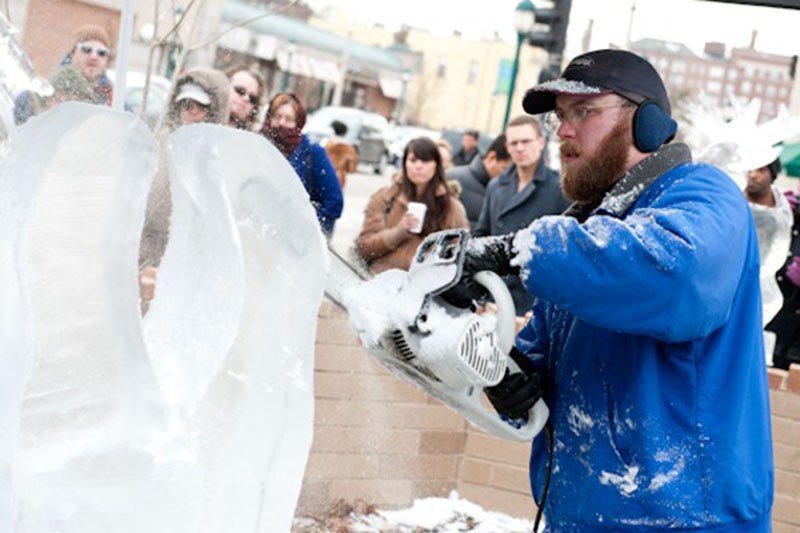 5. Celebrate Winter on the Loop

It's been an interesting "winter" so far. We had T-shirt weather on Christmas day and long stretches of the warm/cool mambo. The most dangerous precipitation has been rain (and lots of it). Will this year's Loop Ice Carnival ice sculptures even make it to the end of the day? Mmmaybe? Colder weather is predicted, so here's hoping the annual celebration of all things icy stays icy. The Delmar Loop (Delmar Boulevard and Skinker Avenue; www.visittheloop.com/icecarnival) will be chock-a-block with ice slides, a music igloo and snowboarders starting at 11 a.m. The ever-popular human dog sled races (in which teams of people pull wheeled sleds down Delmar) returns, as does frozen turkey bowling. New this year is the 350-foot-long Zip Flyte zipline ($10 per ride) and the Ice Breaker game, a twist on the old carnival test-of-strength; in this one, you get two swings with a sledgehammer to crack a block of ice. Most events are free, but some do require a fee. — Paul Friswold

Most listeners, casual or committed, are familiar with Aaron Copland's Appalachian Spring, its grandeur and aural capaciousness as richly American as the mountain range that inspired it. Copland's ode to the land and its animating spirit is rightly a permanent resident of the symphonic canon, but there's another work, newer, less established in the public's consciousness, that one day may be just as famous. Olivier Messiaen's From the Canyon to the Stars has also never before been performed in St. Louis — until now. The French composer was inspired to write this work after visiting Bryce Canyon in 1972; the piece was designed to recreate in musical language Messiaen's sense of awe before the presence of the canyon and other national parks in the American West. Complementing the music are video and still images of the West by visual artist Deborah O'Grady. The Saint Louis Symphony Orchestra performs From the Canyon to the Stars at 8 p.m. Saturday at Powell Symphony Hall (718 North Grand Boulevard; 314-534-1700 or www.stlsymphony.org). Tickets are $25 to $86.50. — Alex Weir


Paul Newman and Steve McQueen both agreed to star in 20th Century Fox's iconic western Butch Cassidy and the Sundance Kid, but McQueen backed out of the film due to billing disagreements. Fortunately, Robert Redford had no such qualms and was cast as the handsome Sundance Kid alongside Newman's rugged Butch Cassidy. Turner Classic Movies presents the Academy Award-winning buddy Western at 2 and 7 p.m. Sunday and Wednesday (January 17 and 20) as part of its Big Screen Classics series. You can see it locally at the Wehrenberg Ronnies 20 Cine (5320 South Lindbergh Boulevard; www.fathomevents.com). Tickets are $14.— Mark Fischer


8. See a Buzzed-About Film at Webster U.

Taiwanese New Wave director Hsiao-Hsien Hou's The Assassin (Nie yin niang) was screened this past summer at the St. Louis International Film Festival to great acclaim and was also a sensation at Cannes. Set in Tang Dynasty China, this vigorous historical drama of palace intrigue and treachery follows Nie Yinniang, who was abducted as a child and raised by a nun who trains her in martial arts. After a thirteen-year exile, Nie returns home as a skilled killer with orders to dispose of the man her parents chose as her future husband. The movie perfectly balances fast-paced action with intense silences and gorgeous cinematography. The Webster Film Series screens The Assassin at 7:30 p.m. nightly Friday, January 15, through Saturday, January 23, at Webster University's Moore Auditorium (470 East Lockwood Avenue; 314-968-7487 or www.webster.edu/film-series). Tickets are $4 to $6. — Rob Levy