5 Things to Do This Weekend

Christmas will be over by midnight Friday — but that still leaves a long weekend. You'll have two full days even after your two full days off. Why not do something new?

Here are our five recommendations for the weekend. We've even got something fun — and free — to do on Christmas Day, so you have no excuse not to get out and have fun.

Christmas tradition for Americans has us trooping to cineplexes and theaters for our evening's diversion after the presents are exchanged, the food eaten, and the visiting completed. But what do you do in a movie theater? You sit — after you just sat in the car getting there. This is on top of all the sitting you've most likely been doing the whole day long. Too much sitting ails a body; why not move instead? Better yet, move those sedentary limbs along a nice trail outdoors at night. Christmas Days' Monthly Moonlight Hike (Olin Nature Preserve – The Nature Institute, 2213 South Levis Lane, Godfrey, Illinois; 618-466-9930 or www.greatriverroad.com) is your ticket out of the indoor stationary blues. This guided hike takes you through part of the Mississippi Sanctuary, 37 acres of dramatic views, waterfalls and wildlife. The excursion is free and lasts approximately one hour on light to moderate terrain. — Alex Weir


A wise-ish man once said, "The best way to spread Christmas cheer is to sing out loud for all to hear." That man was Buddy the Elf, and he knew what he was talking about. As a human raised as an elf in Santa's workshop, all Buddy wanted to do was celebrate Christmas and find his real father. That dual mission took him to New York, where he got to do both of those things, as well as fall in love and help his old pal, Santa, do the Christmas Eve run. The Broadway musical adaptation of the classic family film Elf retells Buddy's saga with more singing and, sadly, less Amy Sedaris. Elf is presented at 3 and 7:30 p.m. Saturday and Sunday (December 26 and 27) at the Peabody Opera House (1400 Market Street; 314-499-7600 or www.peabodyoperahouse.com). Tickets are $30 to $82 .— Paul Friswold

Christmas is generally for and about satisfying children's need for toys and attention. And now that it's over, maybe you should think about doing something nice for yourself — or maybe you should do something naughty instead. Make a night of it and check out Peepholes of Paris: A Moulin Revue. Burlesque troupe the Jumpin' Jupiters presents this Moulin Rouge-inspired performance as a floor show while you enjoy a four-course dinner. And you don't have to leave when it's over — stick around for dancing and drinks with the cast. It's an old-world night out here in the new world. Dinner starts at 7:30 p.m. at the the Boom Boom Room (500 North Fourteenth Street; 314-436-7000 or www.theboomboomroomstl.com). Tickets are $49 and include dinner and drinks, but gratuity's not included. — Paul Friswold 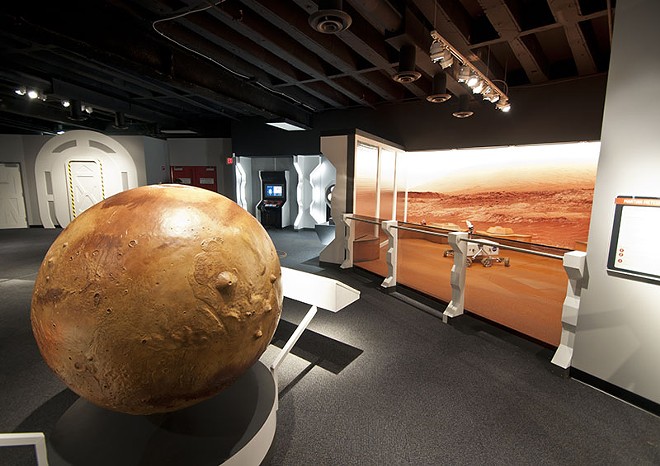 
The St. Louis Ambush are hoping for some leftover holiday magic when the team squares off Sunday against Central Division rivals, the Milwaukee Wave. Former St. Louis Steamer Daryl Doran, now in his fourteenth full season coaching a St. Louis indoor soccer league franchise, hopes a victory here can reverse his squad's anemic start to the season. This post-yuletide match offers the Ambush a golden opportunity to turn things around against a struggling opponent that features a balanced attack from midfielders Max Ferdinand and Ian Bennett. A big win on home turf could get the ball bouncing their way. Game time is 5:35 p.m. at the Family Arena (2002 Arena Parkway, St. Charles; 636-896-4200 or www.stlouisambush.com), and tickets are $15 to $47. — Rob Levy


5. Learn Something About Mars

NASA is currently working toward the goal of putting humans on Mars in the 2030s, which is not as far away as it sounds. The space agency just last week opened the astronaut application process for the class of 2017, which indicates a certain urgency. If you're eager to see what the future holds, the Mission: Mars exhibition at the Saint Louis Science Center (5050 Oakland Avenue; 314-289-4400 or www.slsc.org) is the place to be. This interactive display is developed by the science center, Washington University and NASA and is divided into two parts. Mission Control gives you the chance to program and remotely drive a simulated Mars rover, complete with the time delay caused by the signal transit time between Earth and Mars. Mission Mars — Base lets you take on the role of an explorer on the Red Planet in the year 2076. You'll conduct scientific operations at key points using one of the science center's two rovers. Mission: Mars is open daily, and admission is free. — Paul Friswold