12 Ways to Celebrate Christmas in St. Louis This Week 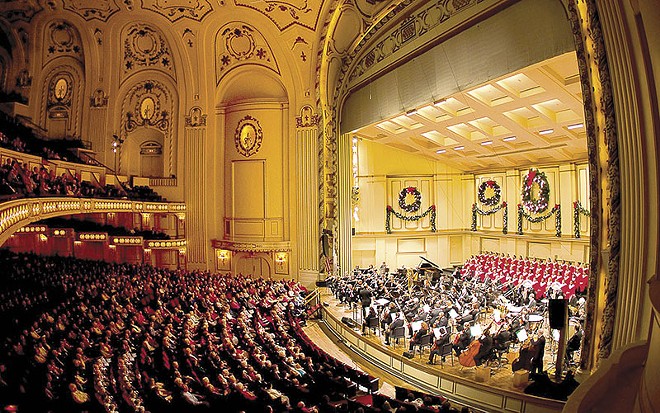 Christmas Eve is one week from today — which means you're probably unbelievably busy. Still, with so many great things going on right now, you'd be a fool not to carve out some time to sample the best holiday events St. Louis has to offer. From touching theatrical performances to classic holiday films, along with no less than seven (count 'em) options to see holiday lights, here's our roundup of events to do right now .. or tomorrow ... or next Wednesday once you're finally off work. Just don't less the moment pass ... by January, most of this stuff will be over for another full year.

Already planning for New Year's? We've got a list for that, too.

Here are our twelve picks for pre-Christmas fun.

1. A Singalong at Powell Hall


Friday, December 18 to Sunday, December 20
Conductor Steven Jarvi and the St. Louis Symphony Orchestra join forces to turn Powell Hall into a festive winter wonderland with the Macy's Holiday Celebration. The performance includes seasonal favorites "Sleigh Ride," "White Christmas" and "It's the Most Wonderful Time of the Year," as well as a selection of songs from the animated film The Polar Express. The Yuletide cheer reaches a fever pitch when Santa Claus stops by with glad tidings. These family-friendly concerts are Grinch- free, and singing along is strongly encouraged. Performances take place at 2 and 7:30 p.m. Friday and Saturday, and 2 p.m. Sunday (December 18 through 20) at Powell Hall (718 North Grand Boulevard; 314-534-1700 or www.slso.org). Admission is $30 to $75.— Rob Levy


You have many entertainment options for the Christmas season, but limited time. Make time to see Peter Rothstein's All Is Calm. This acappella musical is inspired by the soldiers on both sides of World War I who laid down their guns and embraced their fellow men rather than fight on Christmas Day. It's a moving story beautifully presented by Mustard Seed Theatre, which brings it back for a third year in a row. The play is performed at 8 p.m. Thursday through Saturday, and at 2 and 5 p.m. Sunday (November 27 through December 20) at Fontbonne Fine Arts Theatre (6800 Wydown Boulevard; 314-719-8060 or www.mustardseedtheatre.com). Tickets are $25 to $30.— Paul Friswold

Christmas often makes people lonely. It's the forced merriment, mostly — if you're on your own in the world, being constantly told that this is the season of joy and togetherness comes with the reminder, "but not for you, singleton." But there is an antidote: BandTogether's annual holiday show. St. Louis' LGBTA concert band is an all-volunteer musical force that plays everything from classical music to standards. This year's theme is "My Favorite Things," and the program includes "Rudolph the Red-Nosed Reindeer," "O Holy Night" and music from A Charlie Brown Christmas. It's free, it's fun and there's always a jolly crowd for you to join. The show takes place at 8 p.m. tonight at the 560 Music Building (560 Trinity Avenue, University City; www.bandtogetherstl.com).— Paul Friswold

4. A Screening of a Holiday Classic
Sunday, December 20

No one was more surprised than director Frank Capra when his film It's a Wonderful Life became a Christmas classic decades after its release. Capra himself didn't even think of the film as a Christmas tale, and though it premiered to mixed reviews in New York on December 20, 1946, the film did not go in to general release until after the holidays. During the 1980s It's a Wonderful Life became a staple of the holiday season, thanks to repeated showings on hundreds of local television stations. Today at 5 p.m. you can see George Bailey and his existential despair on the big screen for free at Webster University's Moore Auditorium (470 East Lockwood Avenue; 314-968-7487 or www.webster.edu/film-series). — Mark Fischer

5. A Candlelight Concert
Wednesday, December 23
We're almost to the top of Christmas mountain, which means we should hunker down for the night and conserve energy before the final ascent. There's no better place to recharge than in the joyous company of the annual Bach Society of St. Louis Christmas Candlelight concert. A family favorite since 1951, the performance features carols and the now-traditional candlelight procession through the hall. But because you've been good, you get a special treat: Our beloved Christine Brewer will perform "The Announcement of Christ's Birth" from Handel's Messiah as well as the sublime "O Holy Night." The program starts at 7:30 p.m. tonight at Powell Hall (718 North Grand Boulevard; 314-534-1700 or www.bachsociety.org). Tickets are $30 to $75. — Paul Friswold

When Jack Frost's nipping at your nose, you have a couple of options: A) nose-warmer or B) booze. The nose-warmer is a bad look for most, so enjoy a pint of our hometown's beloved brew as you stroll among the Brewery Lights at Anheuser-Busch Brewery (1200 Lynch Street; 314-577-2626 or www.brewerylights.com). (Another great warm-up option: the s'mores kits available around the on-site fire pits, which are only $2.50 per kit.) One of the region's most popular holiday traditions, the lights twinkle all across the majestic A-B campus and can be peeped on foot or by car. If you're feeling snacky, check out the offerings in the Biergarten, including soft pretzels and chili. The brewery lights are open 5 to 10 p.m. Thursday through Sunday (through Sunday, January 3), but walking tours are not available on Christmas Eve, Christmas Day or New Year's Eve. Self-guided walking tours and beer samples are free; food and other activities are extra.— Brooke Foster

Assemble a coterie of grandpas, and what do you get? A sea of butterscotch candies? Enough quarters-pulled-out-of-ears to buy a Tesla? Perhaps — but the fellas in the Alton "Grandpa Gang" combine powers to create the absolutely magical Christmas Wonderland at Rock Springs Park (2116 College Avenue, Alton, Illinois; 800-258-6645 or www.christmaswonderlandofaltonil.net). Treat the whole family to this gorgeous spectacle, which includes more than 3 million twinkling lights. Plus, the kids can visit Santa Claus in the Enchanted Forest. Drive through in your own vehicle (no headlights necessary, thanks to the festive wattage) or spring for a horse-drawn-carriage ride through the park. Christmas Wonderland is open 6 to 9 p.m. Monday through Friday, and from 5 to 9 p.m. Saturday and Sunday through Sunday, December 27. Admission is $7 for cars and small vans.— Brooke Foster

Transport yourself to a world of sheer holiday magic at the third annual Garden Glow. This event turns the already-gorgeous Missouri Botanical Garden (4344 Shaw Boulevard; 314-577-5100 or www.mobot.org) into a Yuletide dreamscape, with a million-plus lights twinkling throughout the grounds. Snap your photo against wintertime backdrops, enjoy traditional holiday tunes, take part in special seasonal festivities, and dig into warming comfort foods in the garden's on-site café, Sassafras. Garden Glow is open 5 to 9:30 p.m. Wednesday through Sunday (November 21 to December 17), and from 5 to 9:30 p.m. nightly from Friday, December 18, through Saturday, January 2. Admission is $6 to $18.— Brooke Foster

9. A train exhibit at MoBOT
Through January 3

This season, have yourself an evergreen little Christmas at the Gardenland Express train exhibit at the Missouri Botanical Garden (4344 Shaw Boulevard; 314-577-5100 or www.mobot.org). The theme is "conifers of the world," and it celebrates those cone-bearing plants of the season — the pines, junipers, firs, yews and spruces. Six tracks of LGB G-scale model trains chug along through the 5,000-square-foot display of live plants (coniferous and blooming), which is enlivened by miniature winter scenery such as ice skaters on a pond and skiers on the slopes. Gardenland Express is open from 9 a.m. to 4 p.m. daily through Sunday, January 3, 2016, but closed on Christmas Day. Tickets are $5, in addition to the regular garden admission of $3 to $8.— Mark Fischer

10. A Christmas Experience in St. Charles
Through December 24

When it comes to capturing the sweet, nostalgic essence of Christmastime in America, few places do it better than St. Charles' Historic Main Street (100 North Main Street, St. Charles; 800-366-2427 or www.stcharleschristmas.com). Experience the magic for yourself at St. Charles Christmas Traditions, a month-long celebration of holiday cheer. Shop and dine along the red-brick streets, say hello to the strolling characters, and allow the festive carolers to lift your spirits. This is the perfect place to begin your own holiday tradition with your family, complete with a gingerbread village, chestnut-roasting and a host of Santas from around the world. Go on — get merry! St. Charles Christmas Traditions opens with a visit from Santa and Mrs. Claus on Friday, November 27. Regular hours are 11 a.m. to 9 p.m. Saturday, noon to 5 p.m. Sunday, 6:30 to 9 p.m. Wednesday and Friday (November 27 to December 23), and from 11 a.m. to 2 p.m. on Thursday, December 24. Admission is free.— Brooke Foster

11. A Lego-based Nativity
Through December 31

You wanna give the kids a thrill? Take 'em to a Christmas display on a Tuesday night. The Way of Lights at the National Shrine of Our Lady of the Snows (442 South Demazenod Drive, Belleville, Illinois; 618-397-6700 or www.snows.org) offers discounts on Tuesdays, and you can avoid the heavy crowds that arrive on the weekend. There's a petting zoo, Christmas tree and wreath displays, a new display of secular scenes crafted out of Legos, and the ever-popular life-size Nativity scene crafted out of Lego blocks — it's a show-stopper. You can even eat dinner there thanks to the open-every-night buffet. The Way of Lights is open 5 to 9 p.m. Monday through Thursday, 5 to 10 p.m. Friday through Sunday through December 31, but closed on Christmas Eve and Christmas Day. Admission is free, but some activities require a fee.— Paul Friswold

12. A Light Show in Brentwood
Through January 2

It's been difficult to get into the winter holiday mood with all of these 70 degree days. But if you pack everybody in the car, blast Christmas music and head to Winter Wonderland in Tilles Park (9551 Litzsinger Road, Brentwood; www.stlouisco.com/parksandrecreation), you'll get that mistletoe feeling. The county parks department's big light show includes amenities such as carriage rides starting at $55 and the special proposal package. Winter Wonderland is open 5:30 to 9:30 p.m. nightly through Saturday, January 2, 2016, but closed on Christmas Eve and New Year's Eve. Admission is $10 for a family vehicle.— Paul Friswold