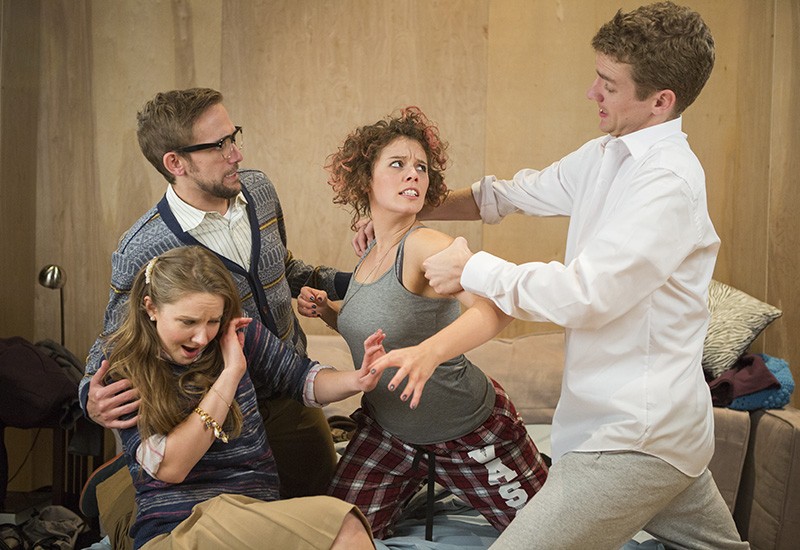 Love theater? This is your weekend: No less than five plays open in St. Louis this weekend, and each has serious appeal. Thinking about catching a show? We've got all the details right here.

The death of a loved one brings out deep feelings in the survivors. In the case of Daphna Feygenbaum, her strongest feeling is fear: Fear that her cousin Liam and his shiksa girlfriend are going to get her grandfather's Chai necklace. That necklace should be hers — she's a good Jew, with an Israeli boyfriend and everything. Liam assures her that he's not going home empty-handed without a fight. Joshua Harmon's Bad Jews is a biting satire about what it means to be a Jewish American. The New Jewish Theatre presents Bad Jews at 7:30 p.m. Wednesday and Thursday, 8 p.m. Saturday, and 2 p.m. Sunday (December 3 through 20) at the Jewish Community Center's Wool Studio Theatre (2 Millstone Campus Drive; 314-442-3283 or www.newjewishtheatre.org). Tickets are $39.50 to $43.50. — Paul Friswold

In Donald Coburn's Pulitzer Prize-winning drama Gin Game, a game of cards becomes a white-knuckle struggle for redemption. Weller and Fonsia are both residents of a rundown nursing home. The two begin a regular gin game that fills their empty days but also consumes them. Fonsia's an excellent player, and Weller can't beat her. If he could just eke out a victory, his life would have a high point. As they play they discuss their lives, sharing intimate details that don't necessarily bring them closer to each other. St. Louis Actors' Studio presents Gin Game at 8 p.m. Thursday through Saturday and 3 p.m. Sunday (December 4 through 20) at the Gaslight Theatre (358 North Boyle Avenue; 314-458-2978 or www.stlas.org). Tickets are $30 to $35. — Paul Friswold


3. Devil Boys from Beyond

There are strange goings-on in Lizard Lick, Florida. People are buzzing about reports of flying saucers, and two locals, Florence and Dotty, claim that their husbands have been abducted by aliens. With the Cold War raging, some fear the Commies are behind it all. The New York papers send a couple pros down to get the scoop, but paranoia and old grudges stymie their best efforts. Buddy Thomas and Kenneth Elliott's campy sci-fi comedy Devil Boys from Beyond mocks B-movies and the politics of the Atomic Age. Stray Dog Theatre presents Devil Boys from Beyond at 8 p.m. Thursday through Saturday (December 3 through 19) at Tower Grove Abbey (2336 Tennessee Avenue; 314-865-1995 or www.straydogtheatre.com). Tickets are $20 to $25.— Paul Friswold

In his musical Café Chanson, Ken Page told a story through the memories of a dying World War II veteran and the music of post-war France. In Page's new play, Sublime Intimacy, the story is conjured from the shared memories of a group of friends. Each of five characters recalls their relationship with a mutual friend, a dancer whom they all loved. Page bills it as "a play with dance." Max & Louie Productions presents Sublime Intimacy at 8 p.m. Thursday through Saturday and at 2 p.m. Sunday (December 4 through 20) at the Kranzberg Arts Center (501 North Grand Boulevard; 314-795-8778 or www.maxandlouie.com). Tickets are $35 to $40.— Paul Friswold


5. Peter and the Starcatcher

The Repertory Theatre of St. Louis continues its season with the Tony Award-winning Peter and the Starcatcher. This swashbuckling production, adapted by Rick Elice from Dave Barry and Ridley Pearson's novel, is an origin story for J.M. Barrie's Peter Pan. Molly, a rookie starcatcher (a being who gathers fallen stars so they can't be used for evil), is charged with safeguarding starstuff from the dread pirate Black Stache. She attempts to engage a nameless orphan boy as an ally, but she has to convince him to trust himself before he can trust her. Peter and the Starcatcher is performed Tuesday through Sunday (December 4 through 27; no shows on Christmas Eve or Christmas Day) at Webster University's Loretto-Hilton Center (130 Edgar Road; 314-968-4925 or www.repstl.org). Tickets are $17.50 to $79.50.— Rob Levy