St. Louis Muralist Aims to Use Art to Rally Support for Syrian Refugees 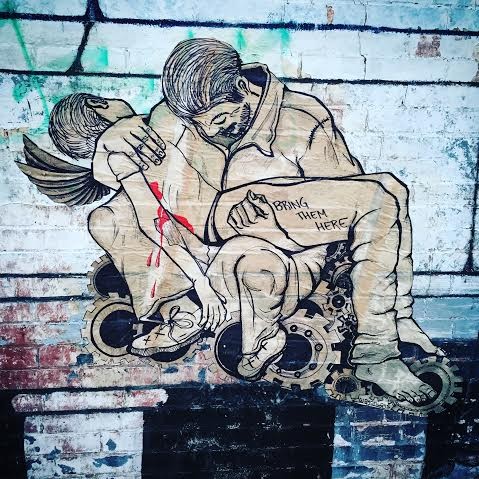 The Syrian refugee crisis is a rolling human tragedy on an immense scale. More than 4 million Syrians have fled their country. But to Chelsea Ritter-Soronen, a St. Louis-based muralist and activist, the grim reality seemed all too easy for St. Louisans to ignore. So she decided to do something about it.

"When we look at images of warfare through a screen, it’s very easy to become immune to those images," she says. "I wanted to take the images from the media, take them away from a screen and put them into a real world setting."

On Sunday night, the 29-year-old public artist affixed wheatpaste murals to walls belonging to three businesses in the Cherokee neighborhood, as well as one in the Grove. Drawn in permanent marker on blank newsprint, the murals use as their source material actual media photos of Syrian refugees.

Outside the Carniceria Latino Americana restaurant on Cherokee Street, Ritter-Soronen pasted a mural based on an Associated Press photo showing a Syrian father cradling his son's body.

Ritter-Soronen left this mural — inspired by this photo — on a temporary wall in the front of Nebula, on the corner of Jefferson Avenue and Cherokee Street.

Wings and gears are a consistent motif in Ritter-Soronen's work. This mural (on the side of Rise Coffee in The Grove) depicts a young woman with the words "Bring them here" on her right arm. The other message, according to the source photo, means "I want the life I had back."

Ritter-Soronen put this mural in an alley off of Cherokee Street, in between Jefferson and Texas avenues. It's based on a gripping photo a refugee helping another man pass below a barbed wire fence.

These are just the first wave of murals, says Ritter-Soronen. A dozen other businesses, including Guerrilla Street Food, Yaqui's and 2720, have contacted her to offer wall space. She hopes that these pieces of public art can disrupt the prevailing climate of paranoia and borderline bigotry toward Syrian refugees.

"It’s a choice, to listen to the radio or turn on the TV. And it's just as much of a choice to choose not to. But this is a crisis," she says. "By putting these images on the side of a market, or a side of a bar you frequent, that choice gets taken away and you have to look at it for second. Anybody can relate to the image of a father holding his dying son. When those images are in in front of you, you forget what religion they are or what country they’re from. You just want to know that they're okay."