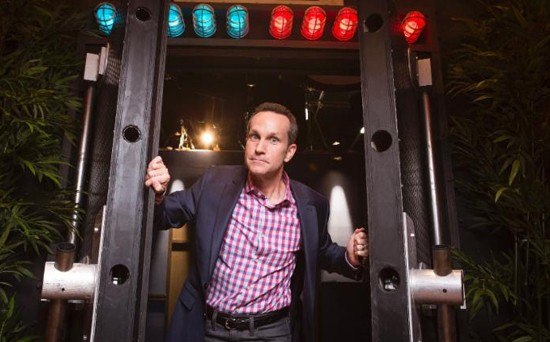 Jimmy Pardo came up during the comedy boom of the '80s. He weathered the storm in the '90s, and then landed himself a gig as the warm-up act for The Tonight Show with Conan O'Brien — but not before initially turning it down. Now he’s returning to his roots and taking to the road with a show that’s, really, pretty dependent on you.

Whether you call it crowd work, improvising or stream-of-consciousness, Pardo is a master of the moment and capitalizing on the energy of a room. He exudes the kind of onstage confidence that would lead one to believe he’s never missed a joke, though obviously that is not the case. In advance of his shows this Friday and Saturday at Hey Guys Comedy Club in Fairview Heights, Illinois, we spoke with Jimmy Pardo about bombing and how he made it out of the years when it felt like he couldn't do much else.


Kelsey McClure: What is the longest time period where you were bombing consistently?

Jimmy Pardo: I was a really great open mic-er; I was really funny. I took some chances. I took risks, and then when I started getting paid I thought, "Okay, well now this is my job I'm going to take this very seriously," and I kind of abandoned everything that I was doing as an open mic-er and being pretty generic. While I was getting paid, because I had stage presence and confidence, I wasn't being interesting and I wasn't really being funny, and so I kind of wasn't really bombing as much as I was just kind of doing nothing. I was just kind of a shrug.

Did you ever bomb?

Oh no, I did. About five years in, something clicked where then I got really funny on stage. And then in the mid-'90s I went through a horrible breakup and maybe some depression, I'm not sure, and I became really angry on stage. I never think it's the comedian's fault if it's a bad show, but during that time, if you're going out of your way not to be funny… which I didn't realize I was. I just was angry. I bombed for a lot of years in the mid-'90s, and then a booker by the name of Mark Kolo, who booked for John Yoder’s Funny Business — and John Yoder to an extent, but mostly Mark Kolo — they thought I was really funny. There were a couple of other bookers around the country that thought I was funny, and luckily they stayed with me. They kept booking me through that time, even though the clubs were basically saying, "We don't want this guy back, he's not funny." They kept booking me and they believed in me. Luckily I got out of it.

How did you land the job of being Conan's opener?


I was like, "You know, I don't really know if I want to do that. I don't know if I want to be a warm-up act." Then that's when they explained to me, "You don't have to do commercial breaks, you don't have to be a baby sitter, you get to go up and be a comedian and after you say, 'Please welcome Conan O'Brien!' you're done." And I was like, "You know what? This is a great gig."


Well, my album's been out for a year and a half, it's very similar to that. My show is always.... there's always the same skeleton there. Where there's the fall back bits that I go into, but I do so much improvising on stage and what is basically dubbed "crowd work" even though I'd like to think it's more stream-of-consciousness. I know people that are coming to all three shows because they know all three are going to be different.