Works on paper, works surveying the trickster of lore, works involving 3-D milk crates — even the works of Sir Winston Churchill himself. This weekend's art openings have something for everyone. Make plans to attend the opening night reception ... or maybe just visit once the hubbub has died down.


Christopher Burch: One Who Sings With No Tongue Is Either Damned or Divine Hoffman LaChance Contemporary (2713 Sutton Boulevard, Maplewood; www.hoffmanlachancefineart.com)

Opening reception 7-11 p.m. Fri., Nov. 13. Continues through Nov. 28. In folklore and mythology, the trickster figure is both admired and feared because of their intelligence. It's a double-edged sword that allows them to cut through the obstacles that hold them back, but it's also a weapon that makes them dangerous. In African-American folklore, Br'er Rabbit is the prime example of the hero who you respect but keep at arms length — too much trouble follows that guy around. Artist Christopher Burch celebrates this dichotomy in his ongoing graphic narrative, The Missed Adventures of Br'er Rabbit and Br'er Death in the Land of Shadows. For the new installment of the project, One Who Sings With No Tongue Is Either Damned or Divine, Burch combines fine art illustration techniques and the looser style of comic book art with his own "afro-surreal" aesthetics to recast Br'er Rabbit and his own creation Br'er Death as active fighters in a war of resistance against the hostile lands they find themselves in.

If you're interested in the latest New York art but have neither the time nor the money to make the trip, Philip Slein Gallery makes it easy for you with Works on Paper 2015. The group show features new drawings by eight artists, all of whom pursue their own agenda in their work. Ron Gorchov (who showed his large-scale sculptures at CAMSTL not long ago) here shows you his smaller watercolors. Philip Taafe keeps it big with his large-scale paintings, while Wardell Milan's most recent work blends graphite human figures, collaged nude photos and vibrant color in dizzying layers. 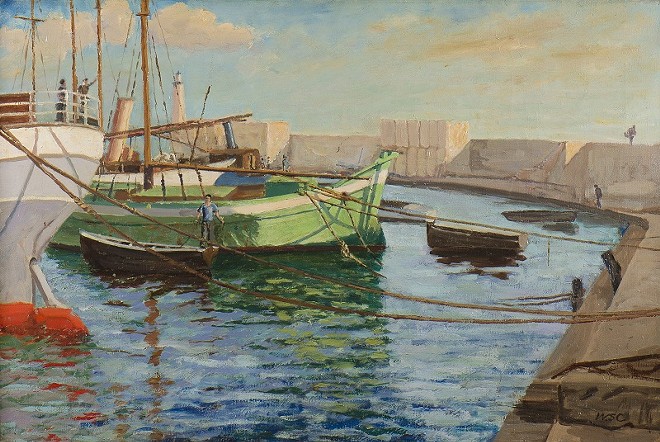 
Sir Winston Churchill famously held England together during the Battle of Britain, but he was also a successful historian, an old soldier and perhaps the world's first motivational speaker. But his great love was painting, because he was doing it without the weight of a nation on his back. Churchill's oil paintings were his solace in peacetime and in war, but he always downplayed his talent. In fact he was a creditable draftsman, turning out landscapes that reveal a keen understanding of light and composition. The Paintings of Winston Churchill, a joint exhibition presented by the National Churchill Museum at Westminster College in Fulton, Missouri, and Washington University in St. Louis, showcase 47 of the British Bulldog's paintings to commemorate the 50th anniversary of his death. It's a show that will please historians and inspire amateur artists, and vice versa.

Carlos Reyes comes to St. Louis for his first solo institutional exhibition. Reyes' past works include a lovingly-rendered piece of popcorn in pencil and crayon, and installation of partially-completed, 3-D printed milk crates held together with zip ties and also on fire, and a mirror attached to a hammer and fixed to a piece of birch wonderfully named Yet to be Titled. No matter what form his work takes, there's always an element of humor and a sense of the novel at play.