5 Fun Things to Do This Weekend — No Costumes Required 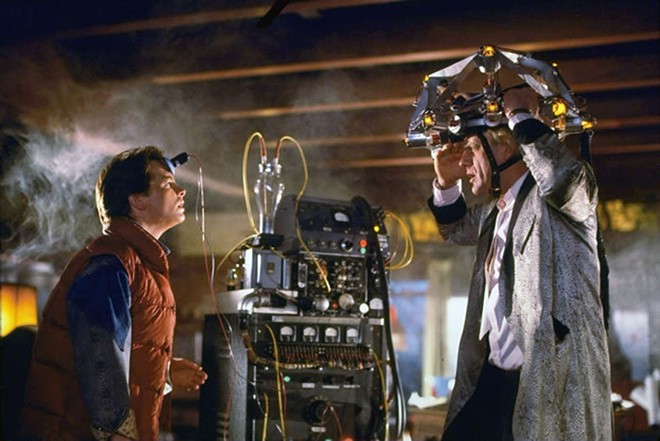 So what's a St. Louisan to do? Well, how about seeing Back to the Future on the big screen at Powell Hall — along with the St. Louis Symphony? Or catching a ballet at Wash. U.? You can even investigate the paranormal at the Missouri Botanical Garden. Just because costumes are permitted doesn't mean you have to wear one.

Here are our picks for the five best things to do other than Halloween parties this weekend. Want a more classic October 31 experience? We've got a whole different list just for that, so mosey over to that one now.

1. Explore the otherworldly presences in an out-of-this-world garden


St. Louis' renowned ghost hunters, the Monster Paranormal Crew, were invited to conduct a paranormal investigation of the Victorian section of the Missouri Botanical Garden (4344 Shaw Boulevard; 314-577-5100 or www.mobot.org). The startling results of their mission are revealed tonight from 6 to 9 p.m. at the Spirits in the Garden celebration. Attendees can also participate in the Wicked Plants Scavenger Hunt and show off their Halloween spirit in a ghastly costume contest. Halloween-themed cocktails from Wood Hat, Pinckney Bend and other local distilleries haunt the grounds, and DJ Rob Levy monster-mashes it up, spinning spooky sounds. Admission is $35 and includes a commemorative tasting glass, samples from the distilleries and plenty of appetizers. Designated drivers pay only $15. — Mark Fischer

Jonathan Harker experiences the worst business trip ever in Bram Stoker's Dracula. Sent to Transylvania to facilitate a real estate transaction for eccentric nobleman Count Dracula, he is instead imprisoned in the castle as a food source for his host and seduced by the count's wives before barely escaping. Only then does he discover that Dracula has left for England in order to win Harker's wife for himself. Missouri Ballet Theatre presents Dracula, Adam Sage's full-length ballet interpretation of the book, at 7:30 p.m. Thursday and Friday (October 29 and 30) at Washington University's Edison Theatre (6445 Forsyth Boulevard; 314-935-6543 or www.missouriballettheatre.org). The performance includes imaginative choreography and whiz-bang special effects, and it's recommended for audiences twelve and older (there's a lot of seducin', after all). Tickets are $25. — Paul Friswold

Back to the Future dominated the Internet last week, thanks to the film's 30th anniversary and the magic date in the first sequel — October 21, 2015 — lining up so nicely. But that was last week. This weekend, the St. Louis Symphony goes back to the past with Marty McFly and Doc Brown in a big way. At 7 p.m. Friday and 2 p.m. Saturday and Sunday (October 30 through November 1), the symphony performs Alan Silvestri's score for the original Back to the Future while the film plays on the big screen at Powell Hall (718 North Grand Boulevard; 314-534-1700 or www.slso.org). Before the concert, you can have your picture taken with a replica DeLorean complete with its own flux capacitor. Tickets are $30 to $65. — Rob Levy

4. Watch a classic at the Tivoli


No matter how many times you do it, the Time Warp never gets old. This year marks the 40th anniversary of Richard O'Brien's midnight classic, The Rocky Horror Picture Show. What better way to celebrate than dusting off your old Riff Raff costume and heading out to the Landmark Tivoli Theatre (6350 Delmar Boulevard, University City; 314-727-7271 or www.landmarktheatres.com) for a couple of midnight screenings? The Samurai Electricians perform as the film's shadow cast, and gift bags with appropriate props are sold in the lobby (no outside props allowed). The Rocky Horror Picture Show screens at midnight Friday and Saturday (October 30 and 31). Tickets are $10. — Rob Levy

Gilbert and Sullivan are renowned for their comic operas satirizing England's authority figures, but they did attempt a few more serious operas. The Yeoman of the Guard is one such effort, and the score is widely regarded as Sullivan's best work. The plot, funny at times but not as all-out zany as their better-known works, concerns the goings-on in the Tower of London in the 1500s. Colonel Fairfax is a tower prisoner sentenced to death, but his friends conspire to spring him by disguising Fairfax as a yeoman, Leonard. Fairfax needs to get married quickly, though; if the plan fails and he dies a bachelor, his malicious cousin inherits the family estate. A strolling singer is convinced to stand in as the bride, which angers her lovestruck partner, the jester Jack Point. Things grow more complicated for all parties, and the finale is atypically bittersweet for a G&S production. Winter Opera Saint Louis opens its ninth season with The Yeoman of the Guard at 8 p.m. Friday and 3 p.m. Sunday (October 30 and November 1) at the Skip Viragh Center for the Arts (425 South Lindbergh Boulevard; 314-865-0038 or www.winteroperastl.org). Tickets are $35 to $55. — Paul Friswold