This weekend, the area's premiere arts-and-crafts gathering, Strange Folk Festival, kicks off — and for the first time ever, it will be right here inside the city limits. For that, we can thank founder Autumn Wiggins' bitter split with her hometown of O'Fallon, Illinois, which hosted the festival for its first nine years. When Wiggins contemplated pulling the plug earlier this year, an argument over ownership turned ugly, and Wiggins ultimately decamped to St. Louis.

And with that dust-up now in the past, Strange Folk is preparing to take over an unusual space: The Union Station Mall. Beginning Saturday at 10 a.m. and continuing through 8 p.m. that day and then from 10 a.m. to 5 p.m. Sunday, the festival hopes to draw crafters, and shoppers, across the region to the down-on-its-luck mall.

Here's what attendees can expect in this year of change for the festival.

1. Nearly 200 independent "makers."
Now in its tenth year, Strange Folk is beloved for a reason: It's bigger, and better-managed, than what anything you might imagine when you think "craft fair." With vendors ranging from traditional artists to inventors of 3-D printers, it's like Etsy come to life, a wildly diverse gathering of the region's top crafters. You can start your Christmas shopping — or just window shop and get inspired to invent something of your own. There will be a lot to look at.

2. An utterly transformed space.
You may remember the Union Station Mall as an odd collection of failing shops aimed at tourists and empty storefronts. And you wouldn't be wrong about that. But it's got beautiful bones, and in the hands of Wiggins and the talented volunteers who assist with Strange Folk, it's likely to look stunning — if not exactly restored to its former glory, certainly intriguingly repurposed. The concept? What the 120-year-old space might look like if nature were allowed to reclaim it.

As Wiggins explains in a press release about the event, "The main event installation includes willowy 'trees' crafted from tulle which extend from the first to the third floor and capture the sunlight from the glass ceiling above. Whimsical 'moss paths' and colorful handmade flowers will meander through the space. Local artist Kristin Cassidy has fabricated 'Curious Cabinets,' which attendees will find along the pathways to Strange Folk stores and amenities." Yes, it's an indoor space, but it may still feel like an enchanted meadow once these talented crafters are done with it. 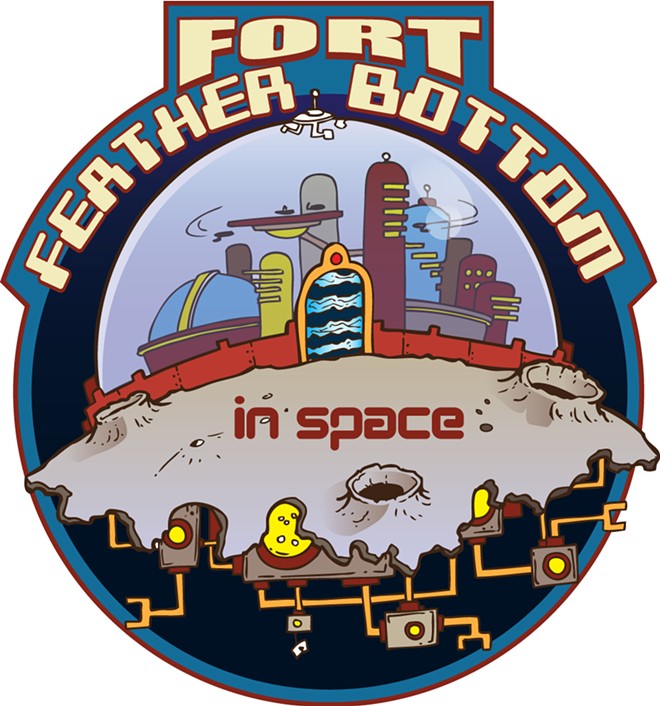 3. A children's play area that's quite different than past years.
A highlight in past Strange Folk festivals was Fort Featherbottom, its children's play area. Thanks to the dispute with O'Fallon, however, the fort's components are no longer in Wiggins' possession. “Years of labor and thousands of dollars worth of handmade and vintage elements, such as artist, Allison Rabbitt’s plush campfire, our bamboo and structures, tools and hardware have whereabouts unknown," she explains. "We are starting from scratch with everything but our name and following."

Rather than try to recreate the past, Fort Featherbottom will now feature an outer space theme. Expect a creative interpretation that turns to the future rather than riffs on the past.

4. Good bands.
Wiggins has curated a who's who of good local bands to play inside the space. On Saturday, you can catch Stephen Korritta, CaveofswordS, Superfun Yeah Yeah Rocketship, Siva Cantele and Syna So Pro. On Sunday, Ellen the Felon, Letter to Memphis and Middle Class Fashion will perform. It's not often you can catch such a great lineup for free.

5. Good food — but you'll have to go outside to get it.
In past years, Strange Folk proved its superiority to many other festivals by offering booze for sale. That won't change even in the new location — a bar will be located on the first floor of the mall. But while favorite food vendors like Whisk: A Sustainable Bake Shop will be on site, they won't be indoors — thanks to Union Station Mall's agreement with its existing food purveyors, restaurants and caterers coming in for the festival will be relegated to an outdoor area. Expect food trucks and other vendors in the south parking lot.

For more information, check out Strange Folk's Facebook page and its website. You can also keep an eye out for the #strangefolkfestival hashtag. Or just make plans to attend this weekend, September 26 and 27. Admission is free.