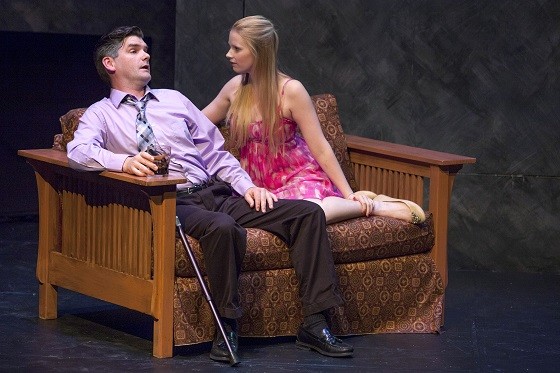 In its three short years of existence, the LaBute New Theater Festival has become a bona fide event. Opening night last Friday saw a full house of eager people who were there to see new plays – and not just new, but good and interesting works.

The night featured no cell phone interruptions, very little talking during the changeovers and an excited buzz at intermission. It drew the sort of rapt audience that wants to be challenged as well as entertained. An audience very well served by what St. Louis Actors' Studio had to offer.

"Kandahar," the Neil LaBute-authored premiere that serves as the opening piece for the duration of the festival's run, is a one-man drama about an American soldier, directed with feeling by John Pierson. Michael Hogan sits behind a card table, barefoot but in military fatigues. Without preamble, he blames "it" on his wife. The thing he did – which soon becomes clear is a massacre of his fellow troops on an American base – is foretold in Hogan's twitching eyes, which he frequently rubs.

Hogan lays out his case in an unemotional, methodical fashion. Lurking in the soldier's "facts" are tell-tale markers of deeper troubles than an unfaithful spouse. His oft-stated belief that women have powers that allow them to manipulate men sounds more like the misogynistic ramblings of spree killer Elliot Rodger (of the 2014 Isla Vista mass murder) than those of a soldier suffering from PTSD. As a result, "Kandahar" is both surprising and gripping.

"Kandahar" is the only play in the festival you can see at every performance. The opening week's slate of six shows will be repeated this weekend, and then four new one-acts debut Friday, July 24, to close out the run. So you should get in quickly if want to see this six-show opening salvo, which includes works by established and emerging playwrights from as far afield as San Francisco and London. It's an interesting selection which fulfills the festival's mission of presenting new works that focus on "fundamental dramaturgy: plot, character and theme" with varying degrees of success. 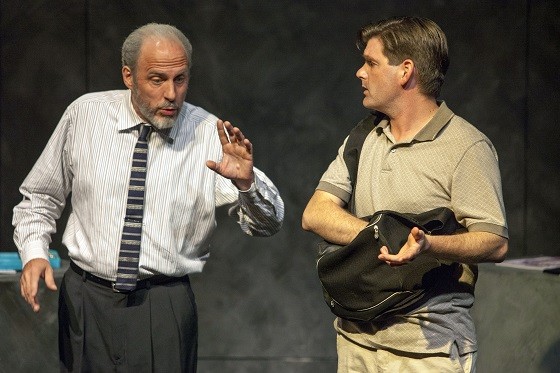 Mark Young's "Custom," directed by Christopher Limber, is a far more hopeful piece about an aged jeweler specializing in made-to-order works. GP Hunsaker plays the jeweler as a man devoted to his craft at the expense of the rest of his life. Nathan Bush is the blandly friendly customer who has an air of menace to his pointed questions about the jeweler's work. As his line of questioning becomes more personal, Bush's face twists and crumbles when the jeweler explains that custom work always features the imperfections of "the human touch," as if Bush is fighting to stifle something deep inside. "Custom" has a fairy tale quality that showcases the talent of both actors very well.

Chris Holbrook's "A Taste of Heaven" (directed by B. Weller) is a bureaucratic comedy starring Nancy Crouse as a woman preemptively declared dead and Kevin Minor as the functionary who demands proof of life before anything can be done to help her. Crouse gets to cycle from bemused to frustrated to terrified, and Minor is exceptionally funny as the man who helped write the test that proves someone is alive, but "A Taste of Heaven" falls too much in the familiar territory of the Monty Python "man behind a desk" sketch to feel novel.

Steve Apostolina's "Cold in Hand" (directed by Christopher Limber) is similarly well-worn material. A young white boy (Rynier Gaffney) who loves the blues and an old blind black man (Don McClendon) who lives the blues argue about who feels it more. Some service is paid to current racial strife and the legitimacy of musical appropriation, but the play suffers from a pat ending. However, McClendon is a legit comedic threat as the wiseacre Razz, who is by far the more appealing character and gets the best lines.

Nathan Bush gets another good role in Lexi Wolfe's "Stand Up for Oneself," also directed by John Pierson. As a 40-something wallflower nursing a whiskey at a party, Bush again displays his gift for revealing intentions and passions in the cock of his head or a sidelong glance. Accosted by 20-something free spirit Lila (Alicia Smith), Bush slurs slightly as the duo verbally spar in a sort of one-sided flirtation, with Smith taking the lead as the delightful aggressor. This is not the first romantic short at LaBute Fest (LaBute himself had one in the inaugural), but it might be the most charming, thanks to its May-early November leads and Wolfe's snappy dialogue.

Technically, we're only at the midway point of this year's LaBute New Theater Festival, and yet it's tempting to already declare it a winner. Judging by the sustained ovation that rang out the first night, there are plenty of other theatergoers who would agree.