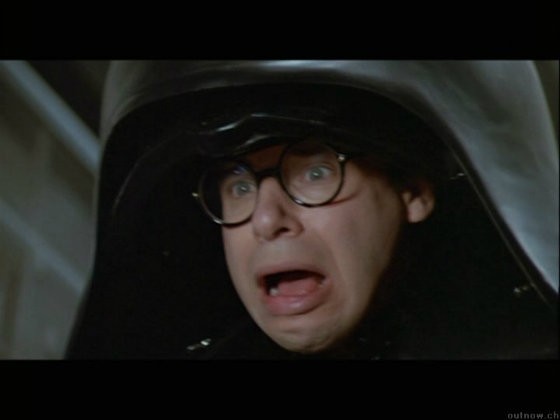 Another rainy weekend! What's a St. Louisan to do?

Well, for starters, you could catch a screening of one of two 1980s classics. (Perhaps the photo above gives some clue of one of the films we're talking about?) Or you could hit the Jewish Film Festival for more serious fare ... or meet the man they call Inspector Collector, who's compiled an amazing collection of menus from Chinese restaurants.

Let the rain keep falling. You can still stay plenty busy with these six happenings.

1. Go on a Big Adventure with Peewee Never has the story of one man and his bike been so epic as it was in 1985 when Paul Reubens released Pee-wee's Big Adventure. Reubens was already on the cusp of being a pretty big deal at the time, thanks to numerous TV guest spots, but his first leading-man role put him at the epicenter of American popular culture. The film also created a buzz around director Tim Burton and film composer Danny Elfman. The absurdly silly flick made millions laugh while teaching most of America that the Alamo doesn't have a basement. The Reel Late series at the Landmark Tivoli Theatre (6350 Delmar Boulevard, University City; 314-727-7271 or www.landmarktheatres.com) presents the Big Adventure at 11:55 p.m. Friday and Saturday (June 5 and 6). Tickets are $8. — Rob Levy

2. Catch an Art Reception The camera may have democratized photography by bringing the power of portraiture to the people, but because of America's troubling racial history there are comparatively few historical photographs of minorities. But that doesn't mean they're not out there — artist Robert E. Green seeks them out to add to his growing collection. Indelible: Historic African-American Photographs and Artifacts from the Collection of Robert E. Green is an exhibition of images Green has obtained, and many of them were made here in St. Louis. Indelible opens with a free reception from 5 to 7 p.m. Friday, June 5, at the Sheldon (3648 Washington Boulevard; 314-533-9900 or www.thesheldon.org). The exhibit remains up through Saturday, August 15, and the gallery is open Tuesday through Saturday. — Paul Friswold

3. Meet the Man They Call "Inspector Collector" When discussing his collection of Chinese restaurant menus, Harley J. Spiller (a.k.a., Inspector Collector), commented that by amassing a collection of something no one cares about, it suddenly becomes interesting. In his new book, Keep the Change: A Collector's Tales of Lucky Pennies, Counterfeit C-Notes, and Other Curious Currency, Spiller focuses on money — something that fascinates just about everyone. But what makes his book so fascinating are the offbeat facts and anecdotes. Did you know U.S. dollars are magnetic? Inspector Collector tells you why — and why it matters. Subterranean Books welcomes the author for a reading and signing at 11 a.m. Sunday under the French light fixtures of Herbie's Vintage 72 (405 North Euclid Avenue; 314-862-6100 or www.subbooks.com). Admission is free, and copies of Keep the Change will be sold onsite. — Mark Fischer

Turn the page for more great rainy-day events this weekend

4. Geek Out on First Friday The St. Louis Science Center's (5050 Oakland Avenue; 314-289-4400 or www.slsc.org) First Friday theme this month is "These ARE the Droids You're Looking For," and as you may have guessed, it's all about robots. The evening kicks off with producer Jini Durr introducing her new IMAX film Robots, which confirms that the forefathers of C-3PO and R2-D2 already walk among us. Narrated by Star Trek's Simon Pegg, the film shows audiences state-of-the-art robot handymen, mechanical butlers, search-and-rescue bots and uncanny, human-looking androids. Other activities include a robot dance presentation, a "People's History of Star Wars" discussion, a demonstration on how to create your own Star Wars scene using stop-motion animation and a screening of Mel Brooks' sci-fi comedy Spaceballs in the Omnimax theater. First Fridays start at 6 p.m.; admission is free, but individual activities may require a small fee. — Mark Fischer

5. See a Film About Fathers and Sons The gap between fathers and their adult sons is a frequent film plot, but directors Guy Nattiv and Erez Tadmor have a few surprises up their sleeves in Magic Men. Avraham (Makram Khoury) is a Greek atheist who now lives in Israel. His son Yehuda (Zohar Shtrauss) is a Hasidic rapper, which means the two don't have a whole lot to talk about. But when Avraham decides he wants to find the magician who saved his life in World War II, the pair team up to navigate the old country. Everything you encounter in a father-son road-trip film is here, including the lack of understanding, uneasy reconciliations and emotional bonding that brings them closer together. Magic Men screens at 5:30 p.m. tonight at the Landmark Plaza Frontenac Cinema (1701 South Lindbergh Boulevard, Frontenac; 314-994-3733 or www.stljewishfilmfestival.org) as part of the St. Louis Jewish Film Festival. Tickets are $8 to $11. — Paul Friswold