Bertolt Brecht and Kurt Weill's assault on society's ills was crafted as Germany started its long slide into Nazism. Poverty was grinding down the middle class, killers stalked the streets, and the government twiddled its thumbs while the ultimate evil grew in strength every day -- and good men did nothing. We all know how that turned out, so why are we making the same mistakes 87 years later?

That is the question haunting almost every lyric Brecht wrote for Threepenny, and it is that question that director Scott Miller has his cast hammer home throughout the show. The result is a sharp, angry musical that shouts the truth about our society's ills for two-and-a-half hours. If you're not angry by the time the lights come up, you're part of the problem. 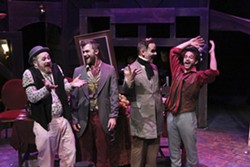 The poor section of London's underworld is made tangible in Rob Lippert's set, with ramshackle, gray wood buildings crowding the stage. A large, red-tinged moon looms overhead, partially obscured by a slack noose that dangles hungrily. As the show opens, the cast appears and sings the original, decidedly non-Bobby Darin lyrics to "The Ballad of Mack the Knife," which are about the thief, rapist and cold-blooded killer Macheath (Todd Schaefer). Musical director Jeffrey Richard Carter leads his excellent band through the song's sea-shanty rhythms with malicious glee. It's a beautiful start to the evening.

Unfortunately, Schaefer seems hesitant in his portrayal of ol' Mackie. He appears to be aiming for detached menace -- as if his fine clothes and grisly reputation set him above the squalor -- but he comes across as simply detached for most of the first act. Schaefer markedly improves in the second half of the play, however, suggesting he could dial it up from the beginning during the rest of the run.

Cherlynn Alvarez is excellent as Macheath's new wife, Polly. Dressed in spotless white, she's an innocent in the clutches of a shark in the early going but quickly reveals her steel. Her performance of the song of vengeance, "Pirate Jenny," raises hackles. "That was art," Macheath announces when she finishes, "and art isn't nice." Too true, Mackie.

Polly's parents, Mr. and Mrs. Peachum (Zachary Allen Farmer and Sarah Porter, respectively), are less pleased with their daughter's choice in fellas. Mr. Peachum is the king of London's beggars, and he and the missus hatch a scheme to put Macheath in that noose overhead. Farmer is a powerful singer with exquisite technical control, and I don't think I've ever heard anyone match him for raw volume -- Sarah Porter excepted. The duo shake the building with their performance of "Instead of Song," and they seize every comic opportunity in this burlesque of a love song.

But Macheath isn't worried about the law catching him. Tiger Brown (Christopher "Zany" Clark), the commissioner of police, is an old friend of Macheath's, as the two reveal in their riotous take on "Army Song." It's a bouncy music-hall number, save for the chorus: "We meet a darker race/and fight them face-to-face/'cause it's clear we're better/We kill them, it doesn't matter." When it's over, Tiger assures Mackie that he's kept any mention of his old pal out of police records. Ladies and gentlemen, your chief of police.

After several captures and quick escapes, Macheath is at last in jail. It is there that Polly meets Mackie's other wife, Lucy Brown (Christina Rios), daughter of the police chief, Tiger. The two women snipe at each other through "Jealousy Duet," another winning number. As they sling insults, a police constable sleeps in a bed nearby, oblivious to the ruckus. He's also oblivious to the two books in his bed, which are Mackie's crime ledgers, left there from an earlier scene. Do not think for a moment that Scott Miller kept them in clear view unintentionally. Instead, it's a fine visual metaphor for a police force in bed with the crooks, underlined by Tiger Brown moving those same books later when he wants to steal a few moments of restful sleep.

So. Go see this play. Any show that has a beggar king deliver the line, "The powerful of the world can make poverty, but they can't bear to look at it," and then continues for an entire third act to depict the police and the crooks working together to ensure they both get away with it, with all of it -- the killing, the lying, the bribe-taking, the ass-covering -- isn't just rubbing your face in the inequities of the world.

That's a show telling you to pay attention, because none of this happens without a complicit public. Art isn't nice, at all.