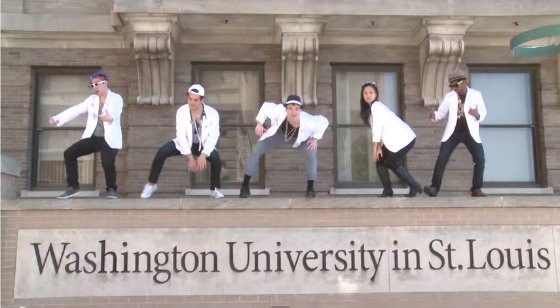 Music-video parodies are a dime a dozen in 2015 -- you can't spend an hour on YouTube without finding 100 not-that-funny versions of any given song on the radio.

But Washington University's "Uptown Funk" parody has a lot going for it that other spoofs don't. For one thing, the first-year med school students who created and star in "First Year Funk" aren't just lip-synching; they're actually singing some pretty funny lyrics.

For another, these doctors-in-training can actually dance.

Travis CreveCoeur, the first year who directed the video, acknowledges that his classmates' skills fly in the face of most stereotypes about his med school peers -- much less those enrolled at the smarter-than-thou university.

"Our new dean of admissions, Valerie Ratts, did a fantastic job choosing kids with various talents for this year's class," he says. Just about everybody in the video -- from its charismatic star, Kenny Newcomer, to Kunal Mathur and Shamaita Majumdar, who handle the lead vocals -- is in fact a member of the first-year class.

And they handled the technical aspects, too, using cameras borrowed from Wash. U.'s WUTV.

The first-years created the video for the class show that's traditionally put on at the end of each year. But while they started talking about doing "Uptown Funk" in February, it wasn't until after spring break in April that they got the lyrics written and began thinking about the project in earnest. Then, in classic med-school fashion, they needed nearly a week of round-the-clock hours to knock the thing out. They finished a final on Thursday, April 30, started working on Friday, and then pulled a series of all-nighters until they got it done -- just in time for the class show on May 8, one week after production began.

"We had six days straight where I did not sleep," CreveCoeur says. "At end of six days, we weren't functioning right, but we did it."

When the video was introduced at the show, the crew got a standing ovation. "I still can't believe how well it turned out," CreveCoeur says. "I still cannot believe it."

The video is embedded below. If you're into med school jokes ("Percussin', auscultatin' basically MD!") best turn on the closed captioning.