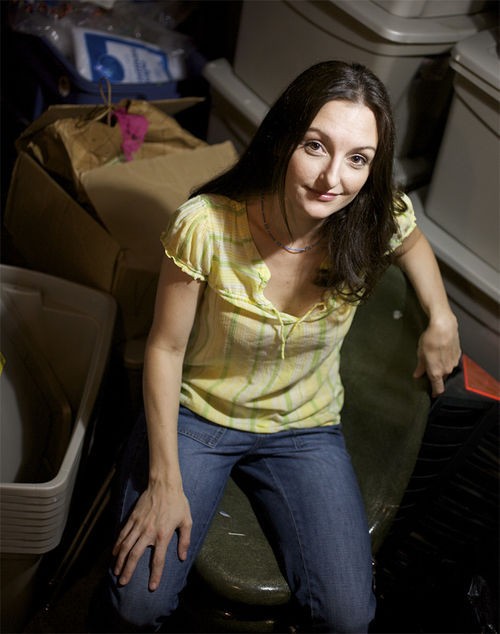 Almost ten years ago, Autumn Wiggins started the Strange Folk Festival in her hometown of O'Fallon, Illinois -- and in the next decade, grew it into one of the Midwest's premiere indie arts festivals.

By this January, however, Wiggins says she felt battered by the Ferguson-related unrest that left her South Grand shop, Upcycle Exchange, with broken windows. She was also weary of how much work she was putting into the festival. She told the O'Fallon Arts Commission she wanted to pull the plug.

But to Wiggins' surprise, the city suggested that they actually owned Strange Folk -- and began making plans for the 2015 iteration without her.

That's when things got ugly. Now the city's attempt at what local crafters call a "fake folk fest" has led to dueling legal threats, cease and desist letters, and even the intervention of local police.

St. Louis' tight-knit craft community is lining up with Wiggins.

Members of the St. Louis Craft Mafia simply will not attend the event, says Beqi Brinkhorst of Beqi Clothing, who's participated in Strange Folk from the beginning. "I've been in business 15 years, and I know almost all the major players in the indie craft scene," she says. "They are all pissed."

That's also true of the Show Me Etsy group, says Michelle Volansky. "I don't think any of us will be taking part in what the city is attempting to do," she says. "If they'd done their own thing, they could have had quality vendors come back. But at this point, I don't think anyone of any quality will want to be a part of it. They'd be blacklisted by this tight-knit community that supports Autumn. I don't think any of us wants to turn our backs on her."

Mary Jeanne Hutchison, O'Fallon's Director of Parks and Recreation, did not respond to a message seeking comment.

Wiggins, who received an RFT "Mastermind" award in 2010, says she brought the idea for the festival to O'Fallon, her hometown, more than a decade ago. She asked the city for some help -- she didn't want to have to worry about accepting checks, and wanted their assistance in accepting credit cards. At that point, the Parks Department agreed to manage the finances, but Wiggins says she never imagined there would be confusion as to the festival's ownership.

It was at the January 2015 meeting of O'Fallon's Arts Commission, which is under its Parks & Recreation Department, that Wiggins told the city she was ending the festival in its current incarnation. Oddly, minutes from the meeting note only that the commission was "brainstorming possible changes for 2016; tabled until March meeting."

In March, Strange Folk was back on the commission agenda, but without Wiggins' name next to it, as in January.

Wiggins would post about what happened next in a long statement on the festival's website. "A few weeks later, the emails, texts, and phone calls from the Parks Dept. began, insisting I hand over my personal account passwords, asking me to come show them 'how to do Facebook ads.' I discovered that a Parks employee had purchased the dot-org version of my domain on Go Daddy," she wrote.

Wiggins sent the city a cease and desist. In return, she writes on the festival website, "The city lawyer sent a short letter that said 'as a former employee,' I was to turn over my 'website and Facebook passwords' along with my laptop and $50. I sent another cease and desist, this time trying to explain why they were in the wrong. Not long after that, I got a call from the O'Fallon PD. Parks dept. staff had reported my MacBook stolen."

The $1,700 MacBook Pro is something Wiggins had personally purchased. Yes, she used Strange Folk's proceeds, but she believed that was within her rights. Even the police officer she spoke to seemed befuddled -- the only evidence he had, he said, was a credit card statement with her signature. Yes, she explained, because she'd bought it herself.

"I have every bit of proof I needed to show that I ran Strange Folk within its allotted budget, and then some, every year," Wiggins said. (Last year, in fact, she says, her balance sheets show that the festival left the city with a profit of several thousand dollars.) Still, she agreed to hand the laptop over.

Wiggins says she initially hoped the city would just back down. If they wanted to host their own festival, great. They just couldn't rip off Strange Folk.

But in recent weeks it became increasingly clear that ripping it off was exactly what they were attempting to do. The final straw was an email the city sent last week to the artists and vendors who'd participated in past years -- instructing them to "Mark your Calendars for Strange Folk 2015." It didn't mention that Wiggins was gone, or that the festival would be changing in any way.

As a vendor of several years, Michelle Volansky received the email. But even though she was well aware of Wiggins' conflicts with O'Fallon, she was shocked by the email's contents -- namely, that the city was using a clumsily edited version of the illustration she'd designed for the 2014 festival. Not only was it blurry ("I think they pulled it off the festival's Facebook banner"), but they'd used Microsoft Paint to add the 2015 date.

Under the contract Volansky had for the artwork -- "a contract between me and Autumn," she says pointedly -- the rights for the work reverted to the illustrator in 2015. So she fired off a cease and desist letter of her own. She has yet to receive a response.

"It just shows their naivete," Volansky says. "I don't think they understand the concept of intellectual property."

Brinkhorst, of Beqi Clothing, goes further. "This is Autumn's festival, period. She made it, she owns the passwords and the trademark. O'Fallon provides the venue. That's it. It's like Madison Square Garden saying they own the rights to the Rolling Stones catalog because the band played they're once. They're a venue."

She adds, "It's ludicrous what they're doing. And they're idiots."

Wiggins says she's heard from crafters, and people offering legal help, from all over the country. She's standing her ground.

"I made this, and I'm not selling it to them, and not signing it over to them," she says. "I wanted them to just respect that. I want it to be over."

We welcome tips and feedback. Send story ideas to sarah.fenske@riverfronttimes.com.

Editor's note: A previous version of this story contained inaccurate information about the festival's profit margin. We also provided the wrong name for the St. Louis Craft Mafia. We regret both errors.