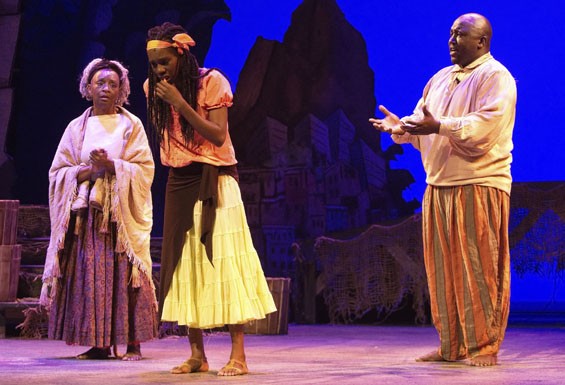 On the surface, Lynn Ahrens and Stephen Flaherty's musical Once on This Island is a fable. The straightforward plot, the colorful cast of characters and the strong moral about love healing a broken society are all tailored for a young audience. And there's nothing at all wrong with that -- kids of all ages will find much to enjoy in the Black Rep's current production.

But director Ron Himes uses this baked-in simplicity to tell two stories at once. The second focuses on haves and have-nots who live separate lives on a Caribbean island, which is all too close to the unfortunate reality shared by the audience watching it unfold. It's a discomfiting experience. After the past year it's impossible to see the tragic death of a young black person and the resulting wave of change that sweeps through a divided society with anything but regret and anger. But here, in the sanctity of the theater, we at least get to see love heal some of those wounds.

The unidentified island -- let's call it St. Louis to honor its French heritage -- is home to a rural village that is battered by a heavy storm when the show opens. A young girl (Dariyah Ja'Nay Ford) is frightened by the storm's fury, and so the elders tell her the story of Ti Moune, who floated to the island during a similar storm.

Ti Moune grows up happy in the village, but one day discovers a young man from the other side of the island trapped in his mangled car. Ti Moune saves his life and falls in love with him. But this man is wealthy, and as Ti Moune's foster parents remind her, there can be no romance between rich and poor on this island. Ti Moune stakes her life on the belief that love is stronger than anything, even death.

Ford and Ashley Ware Jenkins share the role of Ti Moune. Ford is six years old, but she has an outsize voice and clearly delights in the scenes in which she gets to dance. As the older Ti Moune, Jenkins has the more focused voice, coupled with a similar verve when dancing.

Himes, a master at arranging his actors in beautiful formations that show you something of their character's inner workings, pulls off a doozy with these two. When the older Ti Moune is challenged to show some of her peasant dancing at a ball thrown by her rescued driver, Himes has the girl's Mama and Papa (Linda Kennedy and Robert McNichols Jr.) appear on a bridge that spans the back of the stage, with her younger self between them. The family begins dancing, and the older Ti Moune takes up the challenge with a joyous cry and a series of fierce leaps.

In fact, this is one of the strongest dancing ensembles you'll see all year. Choreographer Keith Tyrone Williams is certified by Katherine Dunham to teach her style, and he gives dancers Heather Beal, Samantha Lynnette Madison and Dominique Fulton a powerful and expressive physical language that carries much of the story's emotional impact, particularly because the songs have a sort of generic "Caribbean-ness" that eventually makes them indistinguishable from each other.

The power of this cast makes you overlook the weakness of the tunes, however. The goddesses Erzulie (Scheronda Gregory) and Asaga (Jennifer Kelley) have fulsome, church-trained voices that are all the music songs such as "The Human Heart" (Gregory) and "Mama Will Provide" (Kelley) need.

But for all the joy in the show as written, there is that lingering pain for a St. Louis audience. Ti Moune's lifeless body lays far too long in the street outside the wrought-iron gate that keeps the poor villagers from the homes of the rich. The lights glint on the gate's silver finials, which are the familiar fleur-de-lis of St. Louis' flag. Even death, in the form of the god Papa Ge, takes Ti Moune sorrowfully into his arms, shamed by what he's seen. Ti Moune, being a theatrical construct, is able to forgive those who have wronged her, and gives herself to the island to heal the rift that divides the people. Art finds a way, and people make art. Maybe we could make something better on our own little island.