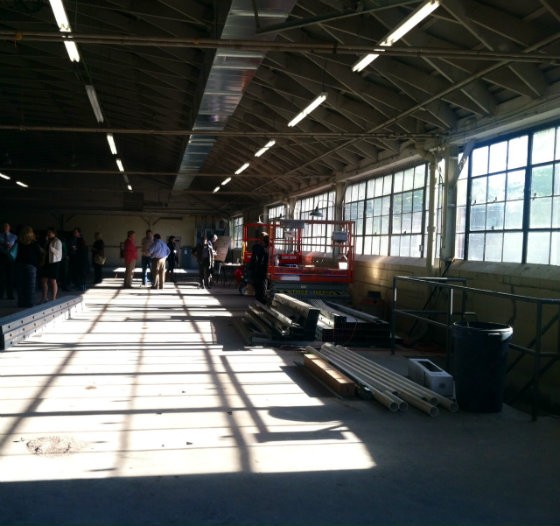 St. Louis ArtWorks, the nonprofit that provides local teens with art-focused apprenticeships, has had no less than seven homes in its twenty years of existence -- from its original site in a Grand Center Baptist church to points downtown and in the Grove before finally settling back to Grand Center again, this time in the Centene Center for the Arts & Education.

This summer, it plans to move again. But this time, there's a difference.

This time, ArtWorks hopes to stay for a long, long time.

The nonprofit's new home is a 6,700-square-foot warehouse on Delmar, just east of Skinker and the heart of the Loop. They've signed a 16-year lease, and the building is, says executive director Priscilla Block, in almost the perfect location: "It's right dead in the middle between west, east, south and north."

The possibilities are huge. As Block told a gaggle of reporters, board members and interested visitors yesterday morning, ArtWorks has big plans for a space that's currently a very large, spare room with a sizable, if unfinished basement.

"Over here, if you can imagine, we'll have a large painting studio," she said, pointing to the front of the space. "Just look at that light" -- which streams in on sunny days thanks to the building's eastern exposure, with large windows illuminating nearly the entire room.

She continued, "Over here, a sculpture studio. Here, we'll have a printmaking studio -- this will be great for our program." Along the west wall, ArtWorks is planning a large media lab; below the main floor, in a lower level that also opens to the outdoors, will be a large cafeteria, a space to work in wood and metal and what they're calling a "maker space" -- "basically, a giant fantasy shop," Block said, where if kids can dream it, they can build it. 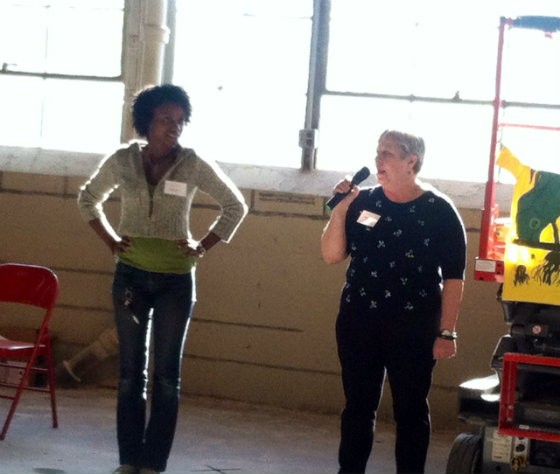 ArtWorks has never been only about the art projects it supervises. The idea is to help underprivileged kids, ages fourteen to nineteen, with the kind of "soft skills" that will serve them in life. They learn to interview for jobs, and show up for work once they have one. They learn how to interact in a professional setting, and the joy that comes from good work done well. That they also make some really cool art -- everything from murals to textile printing -- is a great byproduct.

Explains board member Barbara Levine ("the yoda of this organization," in the words of a colleague), "It's not a program. It's an approach to impacting the lives of young people, through leadership and art."

As of August, ArtWorks hopes to be making that approach in its new digs. The agency is launching an Indiegogo campaign to finish raising the necessary funds.

Regardless of whether it notches the prestigious award, ArtWorks is readying for one last summer in Grand Center, as well as a satellite facility in the Old North neighborhood. Come fall, though, the agency hopes to be right there on Delmar -- smack dab in the center of everything.

Editor's note: A previous version of this story provided incorrect information about the status of building's ownership. The agency has signed a 16-year lease; it did not purchase the building. We regret the error.

We welcome tips and feedback. Contact the writer at sarah.fenske@riverfronttimes.com.