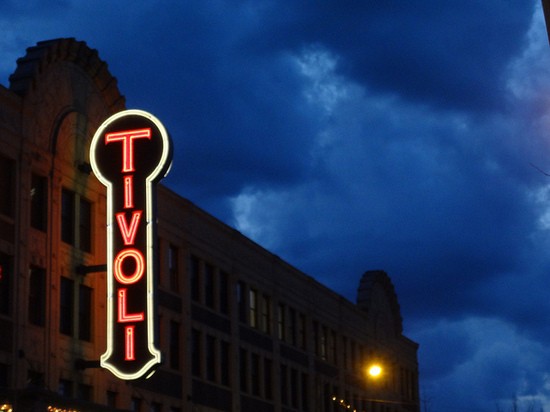 UPDATE on April 24: The Tivoli reopened after nearly a week for its 9:30 p.m. showing on Friday, April 24. See update at end of post.

A water-main break on Delmar has closed the Tivoli Theatre -- and it could be the weekend before it's reopened.

That's meant canceled programming for QFest, the gay/lesbian film festival hosted at the theater by Cinema St. Louis, which kicked off Sunday and was supposed to run through Thursday. Those films have been rescheduled for next week, says the Tivoli's Tom Anson.

The problem was a 115-year-old water line, says Joe Edwards, who owns the Tivoli building.

The main water line, which runs along Delmar, is apparently just fine. But early Sunday morning, around 5 a.m., the line that tees off from the main to the Tivoli and its neighbors suffered some sort of break. That meant the water had to be turned off to prevent flooding -- and, without water or working bathrooms, the Tivoli had to close its doors.

Edwards says he immediately gave the go-ahead for underground work, but it took a little time to secure the right permitting. Construction is supposed to finally begin tonight, nearly two-and-a half days after the break was detected.

Now it's just a question of how bad the underground infrastructure is.

"They don't know what they're going to find until they get down there," Edwards says. "It might be fixed as early as tonight, but I doubt it. Realistically, I think we're looking at Thursday or Friday."

(For the record, the Tivoli's next-door neighbor, the Riverfront Times, has also been affected. But no need to shed any tears for us. We're just worried for the independent movie lovers of St. Louis. We're happy to piss in the alley.)

Anson, of the Tivoli, says the building did suffer some damage, but it was confined to the basement.

QFest is now scheduled to kick off April 26 and run through April 30.

UPDATE: Crews working throughout the week were finally able to restore water to the Tivoli on Friday evening. A Tivoli staffer said the theater would reopen for its 9:30 p.m. show.

QFest is expected to begin on Sunday. See the theater's website for additional information and up-to-date information on screening.