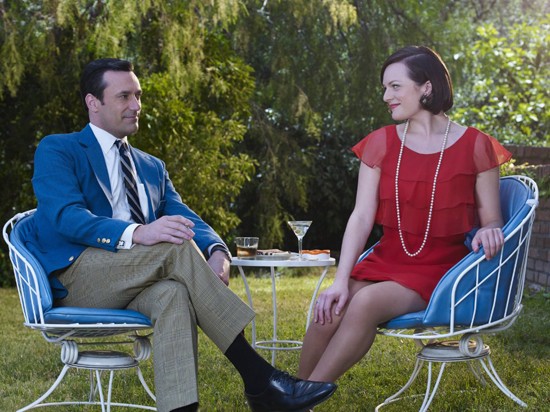 Mad Men has always been, among many other things, about the exit of the old guard and the entrance of the new — and the acceleration of that transition by the mood and the movements of the '60s. The pilot, set in 1960, finds the Sterling Cooper higher-ups scrambling to locate a Jewish employee within their ranks so that he can sit in on a meeting with a potential Jewish client, Rachel Menken (Maggie Siff). "Have we ever hired any Jews?" asks Roger Sterling (John Slattery), whose place at the top was guaranteed to him as a birthright. "Not on my watch!" jokes Don Draper (Jon Hamm), oozing the casual anti-Semitism of the era. Just seven years later, those same men hire a Jewish copywriter, Michael Ginsberg (Ben Feldman) — who in turn becomes psychotically paranoid about being supplanted by the brand-new computer that's moved into his office.

The first half of Mad Men's farewell season ended last May with two unmistakable harbingers of a new dawn: the moon landing and the death of Bert Cooper (Robert Morse), the series' eldest character. But those two events were just the most obvious nodes in a constellation of replacements: of Don by his protégé Peggy Olson (Elisabeth Moss) in the Burger Chef pitch, as well as by new men in the lives of his ex-wives Betty and Megan (January Jones and Jessica Paré). Even his rapidly maturing daughter Sally (Kiernan Shipka) found male attention elsewhere, in the form of an astronomy nerd — as far from Don as a rebellious teen can get. Innocently looming over them all is Ginsberg's old foe, the IBM machine, which threatens to make obsolete not just the agency's employees — "Cutler's not going to stop [shedding staff] until the firm is just Harry and the computer," complained Roger — but, it would seem, human creativity itself.

The first of Mad Men's final seven episodes, which began airing on April 5, builds on last year's theme of replacement and substitution. (The terrifically mysterious and melancholy mid-season premiere was the only episode made available to critics.) Written by series creator Matthew Weiner, "Severance" takes as its through-line the question of how to cope after realizing you've got little else to do but rest on your laurels. Don pulled a Roger in the fourth season when he rashly wed his much younger secretary, Megan, then took forever to admit to himself that the generational gap between them was too wide for either to make the other happy.

But "Severance" finds Don settling in to Roger's aging-playboy slippers even further, holding repeat auditions at the now McCann-owned Sterling Cooper to mack on as many models as possible. Don's a fat, lazy wolf who knows he doesn't need to hunt; the prey will come to him and sit right on his lap. All he's gotta do is let them. The only difference between Roger and Don — other than the older man's '70s-ready David Crosby walrus 'stache — is that the erstwhile Dick Whitman now feels free to recount tales about his poverty-stricken childhood while his dates laugh obligingly.

But Peggy Lee wondering "Is that all there is?" on the soundtrack foreshadows Don's existential hangover. Don's vision of a singing-and-dancing Bert Cooper last year after the old man's passing is echoed in "Severance" by another hallucination. So much of Mad Men's run has focused on its protagonist's striving efforts to get to the top while keeping his shameful past hidden. Now that Don's reached his destination and been liberated from his secrets — he's advertising royalty once again and has a new young thing to distract him every night of the week — he's stuck in a hamster-wheel of hedonism. (Rich-people problems, amirite?)

Don's fears of death and the futility of his accomplishments are the natural extensions of the show's meditations on the mid-century American Dream. And yet this is territory the show has already trod over several times with Roger (though Don has maintained a much less dysfunctional relationship with his daughter). The final seven episodes have a lot of character work ahead if the show wants to distinguish Don's crisis from the ones Roger has already worked through.

Along with mortality, "Severance" introduces another quotidian tragedy: that of being stuck in patterns of dissatisfaction and petty vengeance. Recently made partner Pete Campbell (Vincent Kartheiser) is as slappable as ever, whining that the million-dollar payout he got from the McCann deal, when the larger company bought a majority share of Sterling Cooper last year, just created more tax-avoiding headaches for him. But those patterns also prove compellingly heartbreaking when a long-time character is arbitrarily fired (hence the episode title) — and can't help retaliating in a way that shoots a bullet at his former colleagues and another one straight into his own heart. And, of course, institutional social change can't come quickly enough for Peggy and Joan (Christina Hendricks), two professionally ascendant pioneers who are reduced to an ugly duckling and a pair of breasts by neanderthals from McCann. After a meeting goes awry, the two women passive-aggressively snipe at each other just as they did in Season 1, divided and conquered by men once more.

Though she's encountered a few setbacks in getting out from under Don's shadow, Peggy is, of course, the natural heir of the new era. We learn in "Severance" that she's been so busy as a trailblazer, which has meant many long and lonely nights at the office, that she's never had the opportunity to travel abroad. After a blind date goes surprisingly well, she attempts a spur-of-the-moment trip to Paris with her new lover, but can't find her passport. Whether she'll be able to make that trip — and thus break out of the rut she's forced herself into to get so far at the office — will reveal whether she is aspiring to be just another suit in a gray-flannel skirt — or something more. Don may not be able to adapt to a new world as the '60s come to an end, but Peggy sure can.