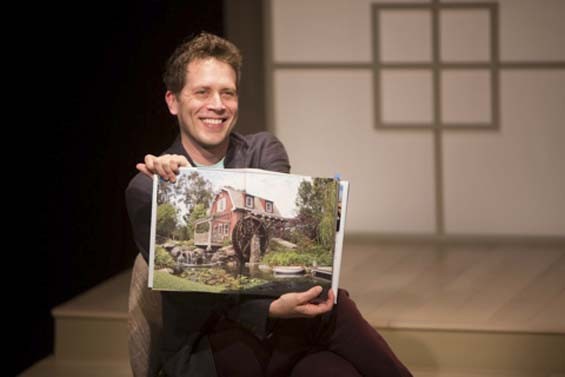 Before Jonathan Tolins' Buyer & Cellar can actually start, the sole actor (Jeremy Webb, directed by Wendy Dann) issues a reminder that everything he's about to relate is fictitious. At first blush this seems unnecessary — you bought your tickets knowing this is a play, after all — but it's more than legalese. "Everything is fictitious" is the leitmotif of this funny and frothy play, in which Barbra Streisand hires actor Alex More to maintain the shops she's had built in her Malibu basement.

Surprisingly, that last bit is in fact true. Streisand is a bit of a collector, and she does house her ever-expanding collection in a series of shops patterned after a nineteenth-century version of a main street. Barbra disclosed all this in her 2010 coffee-table book, My Passion for Design. She does not, however, stash a shopkeeper down there. Life is stranger than fiction when you're incredibly wealthy, but not that strange.

Alex More's journey into this netherworld of costumes and assumed identities begins shortly after he's fired from Disney World — another realm of make-believe — and a former make-out partner gets him an interview with Ms. Streisand's people. In short order he finds himself in a white shirt, sleeve garters and leather apron in Barbra's basement, hoping to encounter his enigmatic employer.

Webb tells us at the onset that he won't impersonate Barbra, but he does affect a slight Brooklyn accent, a nasal voice and a persistent head tilt that strongly implies her character. (His James Brolin is a masterclass in squinting for intensity.) He makes the switch smoothly, even when the pair argue, but it is Webb's charisma that does much of the work. After Barbra says something outrageous, he pops his eyes and laughs with us as if he can't believe she said it either. Performing against a white screen that changes color throughout the show — his only props a small desk, a chair and a water bottle — Webb nonetheless creates the illusion that we're right there with him in that subterranean shopping mall.

Their first meeting is an improvised transaction over a mechanical doll, for which Alex creates a tragic WWII back-story. By the end of this encounter it's clear that both of them are delighted by the game; Alex gets to play make-believe, and Barbra gets to pretend to be someone who is not Barbra Streisand. Alex's ability to make her feel like someone else brings them closer the more they play together in the basement.

But is theirs a real relationship? Alex's boyfriend Barry thinks Barbra's merely playing with him, another toy in the collection, and that Barbra needs to get over her unhappy childhood and get on with her life. More worrisome, Barry believes that Alex is buying into her "poor little rich girl" fantasy.

Is he? In a rare moment of introspection, Alex divulges that his family claims they're descended from Thomas More, who popularized the idea of the Utopia in the sixteenth century. "Every person wants to create that dreamworld," Alex argues. Is there any real harm in wanting a better world? By this point Alex and Barbra are deeply invested in the fiction of the basement, where it's just the two of them — and one of them pays the other to be there.

Buyer & Cellar makes fantasy the more appealing choice than reality. Who doesn't dream of being incalculably wealthy and living out your dream of rehearsing a new version of Gypsy in a lavish estate? It turns out Barbra doesn't. And there is utopia's fatal flaw — everybody has to buy in or the dream rots from the inside. What elevates Buyer & Cellar above being just a clever bit of comic relief is the realization that hits after it's all over: Somewhere in Malibu, Barbra Streisand remains committed to the perfectly designed utopia — one that is empty, save for her.