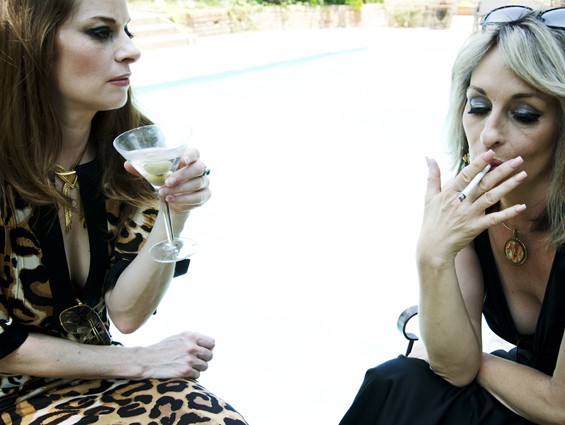 In the 1960s women gained birth control, equal pay (ostensibly) and the "no fault" divorce law, which allowed them to file for divorce without proving their spouse was guilty of wrongdoing. In the '70s, Roe vs. Wade gave women the right to legal abortions, and the first marital-rape law was put into effect in Nebraska. Women have come a long way in terms of civil and reproductive rights, but they're still subject to the pressures of domesticity.

Not all women are as cookie-cutter as June Cleaver, but many still hold closely to the expectations of being "the good wife" — almost as closely as they keep their secrets. In Four Stories, St. Louis native Heather Bennett's alluring large-scale photographs take the viewer on a voyeuristic ride into the lives of four women and their conundrums.

Each story is told through a single print followed by a diptych on the same theme; the multiple images work together to further the narrative. The audience sees the woman at the center of the story, as well as her expanded relationship with the other people in the frame.

In the Anniversary series, the audience is initially roped in by Always the Same, a video of a dissatisfied male confronting the viewer with his intimidating, fixed glare. Throughout the 50-second video his demeanor remains the same. His dominance radiates as you see the flicker of a dress enter and exit the frame. In the next photograph, the male is in the same red leather chair, fashioning the same scowl. At his feet is a slumped-over female bowing to a broken wine glass, glaze distant and concentrated to the floor. The next scene is the same room and the same woman, alone, a bottle of wine hanging in her hand. She's standing up straighter, but her eyes are still fixed on the dark hardwood panels holding her up. Taken together, Always the Same tells of this woman's battles with perpetual unhappiness and the expectation of the "good wife."

The cinematic studio lighting and distant and distressed damsel protagonist, portrayed by Bennett herself, recall the Cindy Sherman's earlier works, while the staged props and supporting cast give the viewer a perceived back-story which resembles a still from a David Lynch film.

Stuck in a not quite Hollywood scene, these ladies second-guess the life they've chosen, unable to find comfort or acceptance in their own skin. Their eyes yearn for another story with greener grass.

Jaded by relationships which are Always the Same, or constantly On the Road, Bennett's women question the validity of the way women are portrayed in film. But more so, they question how much progress has actually been made.