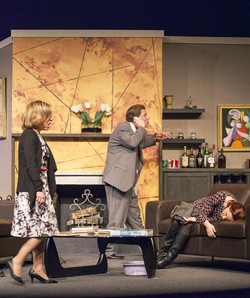 Early on in Yasmina Reza's God of Carnage, Veronica speaks of "the art of coexistence." Veronica is FOX News' idea of a liberal, only more annoying and humorless. She speaks to her guests with a nasty tone of passive-aggression, and she's writing a book about the crisis in Darfur but she's never been to Africa. As played by Sarajane Alverson, Veronica is sandpaper applied directly to the face. It's no wonder that the art of coexistence in her home quickly devolves into so much verbal poo flinging.

Not that Veronica is the only one at fault in this ill-mannered comedy presented this month by Stray Dog Theatre. As is often the case with parents, children are the wellspring of this evening's misery. Veronica and her husband, Michael (Michael Juncal), have invited Alan (Stephen Peirick) and Annette (Michelle Hand) to their swanky Brooklyn apartment to discuss a fight between their sons that resulted in broken teeth. The two couples now wish to arrive at a suitable course of action.

But that's a lie. Not all of these adults are here to achieve rapprochement. They came to win an argument, and they each have a unique definition of what winning entails. Their plots and arguments are concealed by social pleasantries that are soon flayed off, revealing the naked hostility underneath.

This is the formula by which Reza, a French playwright, has staked her claim. Like her other hit, Art (which plays this spring with St. Louis Actors' Studio), God of Carnage takes pleasure in skewering the wealthy and elite. The play is essentially a story about NPR supporters behaving badly, but played for laughs. (Rob Lippert's set, with its luxurious furniture and coffee table full of art books, assures you there is a Wait Wait...Don't Tell Me! tote bag in the closet.)

In less capable hands than director Gary F. Bell's, the scabrous repartee could end up off-putting and abusive. Yet the director and Stray Dog's well-balanced cast allow the brief moments of actual humanity in these characters to shine before they're hilariously — and savagely — snuffed out.

Battle lines are first drawn along a two-couple front. Alan and Annette are conciliatory, while Veronica aggressively reads out the written statement she and Michael have prepared about the boys' fight. Michael sits dutifully by her side as she does this, smiling with a fixed grin that tells you he's as uncomfortable with this as Alan and Annette are. The first time Alan's phone rings you know his heart isn't in this — it's his law practice that he loves. He stalks across the room shouting into his phone as he browbeats a client into following his advice while the rest of party looks away nervously. The third such phone call should end Alan's life, as Annette fixes him with a potent death stare recognizable to all husbands. But Alan's oblivious to this, as he is to most things. Peirick plays him as the perfect asshole, one you love to hate because you know he'll get what's coming to him soon, but not soon enough.

Where Alan is disinterested in this trifling family affair, Annette jumps in as peacemaker, soothing over his outbursts by engaging Veronica in a conversation about art. Whether it's the apple-and-pear-clafoutis Veronica served or the condescension she exudes that makes Annette spew vomit across the table is open to interpretation; regardless, once she's done puking, Annette comes out swinging and Veronica backs her up. Their sudden union is predicated on their staunch pro-life stance in the case of Michael vs. Hamster.

Michael — genial, make-nice Michael — has just last night killed his daughter's hamster because its nocturnal activity was keeping his wounded son awake. Also, he hates rodents. Juncal (last seen in Stray Dog's October production of And Then There Were None) has the ability to go from zero to raging at warp speed, and does so here as his Michael quickly comes unglued when confronted about his hamster atrocities one too many times.

Hand matches him in intensity. Her Annette lost everything when she lost her clafoutis: dignity, decorum, manners, what have you. Civilization has no hold on her anymore, and she first hits Alan where it hurts the most (no, not there — his cell phone) before savaging the last bit of unsullied beauty in Veronica's home. In 90 minutes, she's gone from eloquent peacemaker to screaming destroyer of worlds. Keep in mind, her kid made that same voyage in the blink of an eye. The apple doesn't fall far from the tree — not even when it's projectile vomited.