Guess Who's Coming to Dinner? Story of Race and Hypocrisy Still Merits a Telling at the Rep 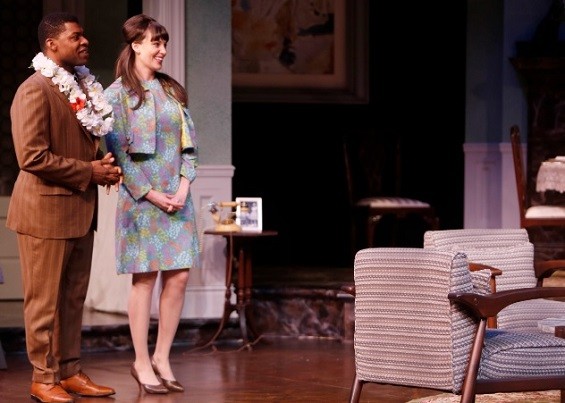 The Repertory Theatre of St. Louis continues its season with Guess Who's Coming to Dinner, Todd Kreidler's richly conceived stage adaptation of the 1967 film.

Starring Katherine Hepburn and Sidney Poitier in the roles of Joanna "Joey" Drayton and John Prentice, Jr., the film served as a cultural touchstone in the country's evolving civil rights movement. William Rose's screenplay detailed with granular precision the struggles of Joey's white and liberal parents to accept their daughter's African-American fiancé over the course of an afternoon. It was heady stuff, as the Draytons owned up to their liberal hypocrisies, eventually summoning the courage of their convictions.

Nearly 50 years later, with interracial couples common, one would be hard pressed to argue that Guess Who's Coming to Dinner makes for provocative theater. Certainly, pockets of overt prejudice still exist, but racism, particularly in liberal circles, has become more subtle, and progressive families like the Draytons would more likely worry about the appearance of racism than, as the Draytons are, by the bald fact of an African-American son-in-law.

But just because Guess Who's Coming to Dinner no longer qualifies as edgy theater does not mean its issues are any less substantial. Under Seth Gordon's expert direction, the Rep's cast teases the nuances from Kreidler's adaptation, delivering a powerful, immersive performance that - if not exactly challenging to an audience already won over to its essential argument - masterfully navigates the shifting waters of race, class, familial acceptance and personal responsibility as they move to overrun the narrow cultural channels that have defined them.

Shannon Marie Sullivan is ebullient in the role of Joey, the Drayton's daughter who has taken to heart the liberal teachings of her parents, Christina (Margaret Daly) and Matt Drayton (Anderson Matthews). She puts their political beliefs to the test, however, when she returns home from Hawaii with her fiancé, Dr. John Prentice (Richard Prioleau), a young, ambitious and highly accomplished doctor who happens to be black.

As the Draytons well know, Dr. Prentice is everything they could have hoped for in a son-in-law - at least on paper. But Matt, in particular, stumbles on Prentice's blackness. He describes his worry in cultural terms, arguing that Joey and Prentice will be discriminated against (or worse) as an interracial couple. Of course, the real question is whether Matt is simply using this broader social concern to veil his own inborn prejudice. But the Draytons aren't the only ones who oppose the match. Their African-American maid, Tillie (an imposing Inga Ballard), looks askance at Prentice, convinced he's a charlatan hustling the naive Joey. And when Prentice's parents (Perri Gaffney and Leo Finnie) finally arrive for dinner, they're as opposed to the match as Joey's parents.

Played on Kevin Depinet's marvelous set of mid-century furnishings and modern art, the talented cast is convincing as each member comes to accept the relationship, realizing the need for personal responsibility to affect cultural change. Rep newcomer Prioleau delivers a strong performance as Prentice, who exudes a confident charm but is also willing to deliver a strong word when needed. He plays well opposite Sullivan, who as Joey harbors a steely resolve beneath her girlish optimism. Matthews is on familiar ground as Matt, playing a caring, thoughtful but flawed father, not unlike the character he played in last year's Other Desert Cities.

Other standouts include Rep favorite Joneal Joplin, who takes a hilarious turn as Monsignor Ryan, the progressive clergyman who makes sport of pricking Matt's conscience, and Ballard manages to be both imperious and doting as the maid Tillie. No, Guess Who's Coming to Dinner isn't likely to change many minds when it comes to current race relations (to the contrary, the audience actively cheered when characters' prejudices were dismantled on opening night), but as a thoughtful articulation of a moment in our civil rights history? It certainly deserves a place at the table.

Guess Who's Coming to Dinner Through February 1 at The Repertory Theatre of St. Louis. Call 314.968.4925 or visit www.repstl.org.