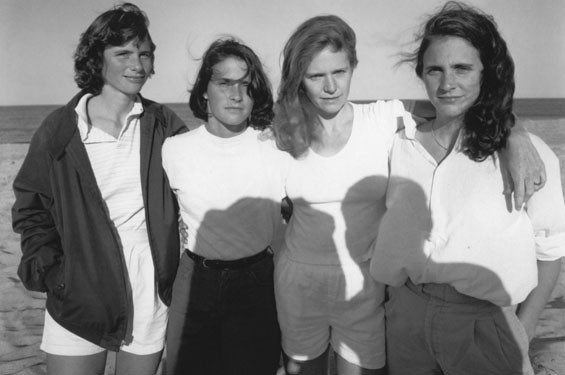 A curious thing occurs midway through Nicholas Nixon: Forty Years of the Brown Sisters, the intimate and overwhelming series of photographic portraits now on view at the Saint Louis Art Museum.

Starting in 1975, Nixon began taking a group portrait of his wife, Bebe, and her three sisters each year at family gatherings. In those early portraits, the young women, who ranged in age from 15 to 25 at the project's inception, look defiantly at the camera. With the exception of Bebe (who, no doubt trying to be supportive of her husband's whim, looks openly at Nixon's lens), the sisters seem skeptical — jaws set, lips tight, arms crossed.

Nixon always arranges the Brown sisters in the same order, with Mimi (the youngest) and Bebe (the oldest) flanked by middle sisters Heather (on the left) and Laurie (on the right). The portraits are all shot in black and white with a large-format camera, producing richly textured images of deep blacks and subtle grays.

We see the sisters with new haircuts, and we marvel as Heather looks dramatically older in the portrait from 1983 than she does in those of 1984 and 1985. Mimi is pregnant in 1992, and Laurie matures dramatically in the mid 1990s. What's perhaps most fascinating, though, is to watch the incremental steps of age. We observe as these young women — who often seem unchanged from year to year — are imperceptibly (but unequivocally) delivered into deep middle age. We go back to look for the tipping point, but the changes are too subtle. Like our own aging, theirs goes unnoticed until it is undeniable and everywhere.

With age, of course, comes an inevitable softening. Not only do their bodies yield to time, but as the series progresses, they also seem to yield to one another. We watch as their bond deepens, and we invent stories for why the sisters seem more carefree one year and more somber the next. Did some tragedy befall the family in 1987? They all seem so hopeful in 1988!

Nixon may have arranged the sisters in the same order, but depending on the year, individual sisters either approach or retreat from the lens. Mimi is prominent in 1989, but the eye is drawn to Laurie in 2000, and Bebe in 2008. (Interestingly, the Brown sisters have the final say in which portrait will be included from year to year.)

The overall effect is that, as viewers, we come to feel we know the Brown sisters. But of course that's impossible. We may have seen them through the years, but we know none of the subtleties that have shaped these lifelong relationships, and as the sisters pass inevitably into middle age — and eventually into their sixties — we must grudgingly admit that our intimacy with them is a vicarious one.

Are they divorced? Single? Mothers? Widows? Have they had careers and families of their own?

It all remains a mystery. And while part of what makes this show so enchanting is the opportunity to observe the subtle effect of time on their physical appearances, equally mesmerizing is the mysterious yet palpable bond that draws these women ever closer.

Nixon, who has shown the series in museums galleries around the world, will perhaps dispel some of these mysteries when he gives a lecture on the series at SLAM at 6:30 p.m. on Friday, February 6.

Nicholas Nixon: Forty Years of the Brown Sisters Through April 5 at the Saint Louis Art Museum. Call 314-721-0072 or click here.