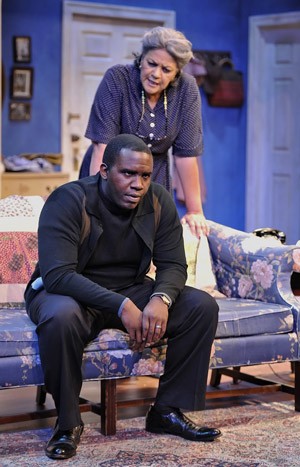 "I'm a volcano," seethes Walter Lee Younger, who for more than 50 years has formed the molten core of A Raisin in the Sun, Lorraine Hansberry's transformative tale of a struggling African American family on Chicago's south side. "Bitter?" he spits. "[A]in't nobody with me! Not even my own mother!"

Desperate and scheming, Ronald L. Conner follows in the tradition of Walters past in the Black Rep's new staging of the show, delivering a performance rich with the anguished thrashings of a man on the verge of relinquishing hope. Nevertheless, director Ed Smith leaves little doubt where the real power in the Younger home resides: That would be with Walter's mama, Lena.

Played by the formidable Andrea Frye, Lena is an imposing stage presence here, appearing somehow physically larger than her striving children while also conveying a gravity forged through generations of incremental victories and abundant defeats. She watched as the world made quick work of her late husband — watched "the red showing in his eyes," as he grew "thin and old before he was forty."

Now, as the play opens, she's trying not to think too hard about the $10,000 life insurance check that could change their lives forever.

But her son, deep in his mid-thirties and grown pretty thin himself, fixates on the money, trying unsuccessfully to convince his God-fearing mother to let him use it to open a liquor store — his last chance at the American Dream. When Lena finally relents, she uses some of the money to buy a family home in the lily-white Clybourne Park neighborhood, setting aside the rest for Walter and his sister, Beneatha (Sharisa Whatley), a burgeoning intellectual who plans to study medicine.

But Walter's desperate ambition soon gets the better of him, and he's nearly broken when an associate absconds with the money. His hopes dashed, Walter is ready to debase himself even further when the Clybourne Park Improvement Association offers to buy the family's new home in an effort to keep them out of the white neighborhood.

With its stark moral choices, archetypal characters, operatic speechifying and sometimes clunky plot devices, A Raisin in the Sun is very much a product of another theatrical era. When it first appeared on Broadway in 1959, Raisin afforded many white audiences their first window into black family life — humanizing their trials in a world where, as Lena would have it, "God didn't see fit to give the black man nothing but dreams." In many ways, Raisin broke the theatrical color line: Not only did it mark the first time a black woman's play appeared on Broadway, but it was also the first Broadway show to employ a black director.

And while the play can at times feel dated, Raisin nevertheless maintains enormous narrative power, which the Black Rep's talented cast harnesses well. Played out on Jim Burwinkel's spot-on shabby set, Thyais Walsh gives a soul-weary performance as Walter's wife, Ruth, a woman so beaten down by life her very bones appear frail. As Walter's sister, Beneatha, Whatley is both precocious and naive as she questions what it is to be black in pre-Civil Rights America. That question comes, somewhat mechanistically, in the form of her two suitors: George Murchison (Nicolas G. Tayborn), the assimilated college-aged son of wealthy black parents, and Joseph Asagai (L.A. Williams), a Nigerian student who instills in her a sense of pride in her African roots. The always talented Joe Hanrahan has the thankless task of portraying Karl Lindner, the seemingly benign racist from Clybourne Park, while Keshon Campbell and Philip Dixon round out the cast in the roles of Walter's son, Travis, and Walter's associate, Bobo.

Hansberry's original stage directions note that the Youngers' apartment should convey a feeling that it has "clearly had to accommodate the living of too many people for too many years — and they are tired." The Black Rep's production certainly hits this mark, but the show's first act also lacks a certain energy between cast members — particularly between Conner and Whatley, who bicker convincingly as siblings, but who draw the relationship less successfully in the play's lighter passages. There were also some jarring technical difficulties during Saturday night's performance, with the scene-change music shifting abruptly, and once invading the auditorium while Frye was in the middle of a powerful monologue.

These issues aside, however, the production's many virtues easily overcome its flaws, revealing once again why this storied play is not only historically relevant, but also culturally vital.

A Raisin in the Sun Through December 21 at the Emerson Performance Center, Harris-Stowe State University. Call 314-534-3810 or click here.