On November 24, after St. Louis County Prosecutor Bob McCulloch announced the grand jury's decision that Ferguson police officer Darren Wilson would not be indicted for fatally shooting Michael Brown in August, things became tense in the St. Louis area. Protests were held in Ferguson, Tower Grove and beyond. Some actions were peaceful; others were not. As the night wore on, police used tear gas on protesters. Windows were broken, and buildings were burned.

The next day, though, things started looking up, thanks to volunteers who were determined to create beauty from destruction.

"I believe in public art," says street artist Peat "EYEZ" Wollaeger. "It's everyone's duty to use their gifts to help promote peace." 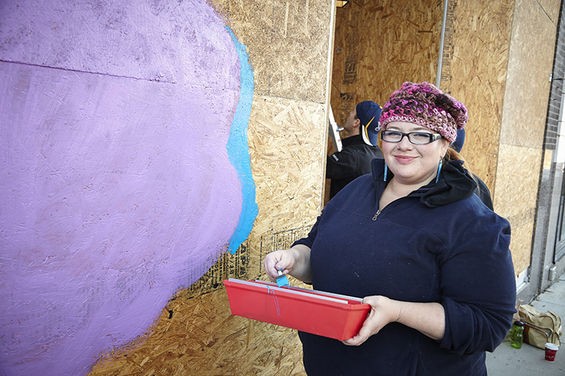 On Grand Boulevard, which runs near several neighborhoods and is in the vicinity of another officer-related shooting death in October, vandals had left their mark by breaking windows. In the aftermath, business owners began boarding up their storefronts with wood and other materials, but the act gave the impression that nothing was open to the community. That was about to change, though.

"We had some creative people from Tower Grove South and Tower Grove East coming together like, 'What needs to be done?'" explains Chris Shearman, president of the South Grand Community Improvement District and owner of Gelateria del Leone.

Expert and novice artists alike began brightening the boarded windows with colorful art and words of hope. In just a few short hours, peace signs, flowers and "We are open" notices dotted gift shops, restaurants and banks, bringing together neighboring communities and showcasing the resolve of a unified business district.

"We've got some boarded-up windows, but we're getting some beautiful art in its place," Shearman says. "It's good to see what good can come of a frustrating situation."

Learn more about the art efforts on South Grand by watching the video below, and then see more photos of artists in action here.