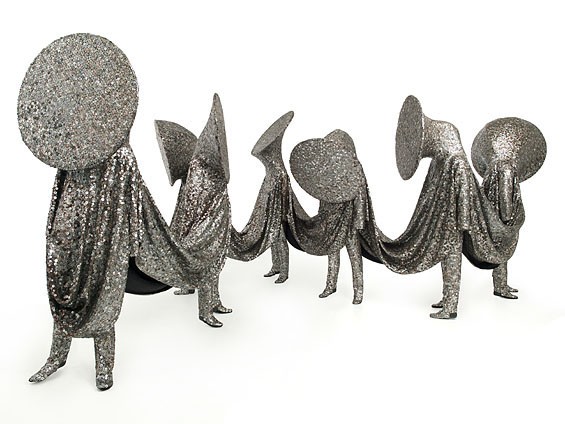 Continued unrest over the shooting death of Michael Brown may seem a world away from Currents 109: Nick Cave, the boisterous new show at the Saint Louis Art Museum that features the Missouri-born artist's bedazzling Soundsuits — wearable sculptures that burst with found objects to create rhapsodic, carnivalesque human forms that are at once foreign and familiar.

But as joyous as Cave's Soundsuits are, they are the offspring of a similar tragedy: the 1991 police beating of Rodney King in Los Angeles. Cave, who is black (and not to be confused with the Australian gloom rocker of the same name), has described his reaction to the event in terms of feeling discarded and devalued by American culture. He responded by collecting similarly cast-off twigs he'd found in a park. After cutting them into three-inch lengths, he attached them to a piece of clothing to create a wearable sculpture.

Cave, who was born in Fulton, but trained as a dancer with Alvin Ailey, had always been interested in the intersection of fashion, visual and performing arts. When he first donned his new creation, he realized it was a form of armor for his blackness — one that erased the wearer's gender, race and class. "When I was inside a suit, you couldn't tell if I was a woman or man; if I was black, red, green or orange; from Haiti or South Africa," he told the New York Times in a 2009 interview. "I was no longer Nick. I was a shaman of sorts."

Cave has since elaborated on that initial sculpture, creating what have become known as Soundsuits, wearable sculptures that have the visual impact of a museum piece, while doubling as otherworldly costumes for his generative dance performances.

Organized by Nichole Bridges, SLAM's associate curator for the Arts of Africa, Oceania, and the Americas, and Tricia Paik, a former associate curator of contemporary art, the Currents 109 show features many of Cave's latest creations — his Soundsuits, a video piece and his Tondos, circular creations that feature the artist's brilliant beadwork. Displayed on life-sized mannequins, the Soundsuits are wildly varied. Some stand ten feet tall, incorporating everything from hot pads, vintage toys and sequins, to buttons, beads and porcelain statuary. One of the most arresting works, however, is shorter, featuring pants and a tunic covered by thousands of shimmering mother of pearl buttons. Attached with a vibrant red thread, the buttons complement the Soundsuit's head, which forms a huge whorl of red and white bristles that's reminiscent of a spotlight, or maybe a floor buffer.

Nearby, a different creation towers over the room, blooming hundreds of sock monkeys and sweaters, while another boasts an elegant brocade of silvery sequins stitched into stars and flowers. Other Soundsuits sport external mantles that look like floral arrangements, with vintage toys — globes, tops, jack-in-the-boxes, etc. — sprouting like so many flowers, or intricate bead vases that are crowned by an enormous Easter Bunny.

These more baroque Soundsuits contrast nicely with Speak Louder, an installation of seven Soundsuits, each meticulously covered in black mother of pearl buttons, which are connected by a flowing piece of black fabric. Reminiscent of August Rodin's The Burghers of Calais, each figure looks in a separate direction — that is, if you can describe their tuba-bell-shaped heads as "looking."

As varied as Cave's works are, the Soundsuits all contain a similar DNA — as though they were distant relations arrived for a fabulous party. Borrowing from American craft traditions, fashion, design and the theater of the African diaspora (and particularly Carnival), Cave's mixed-media creations feel alive — as though they could break into dance at any moment. And while some of the show's works are strictly for display, others are clearly meant to be worn.

Visitors can get a sense of the suits' full transformative range in the not-to-be-missed video that's playing in conjunction with the show. The video (on SLAM's third floor) shows performers wearing several Soundsuits — some reminiscent of Koosh Balls, others of giant phalluses on pogo sticks, while still others appear as brightly colored tribal costumes — dancing to create a convulsive, rhythmic and joyous alternate reality.

It's as though the suits transform the performers, freeing them to create a fresh new world unencumbered by the historical stigmas of race, class and gender. Rooted in pain but so filled with transcendence, the Soundsuits act as a case study for the transformative power of art — a powerful reminder during these tense days in St. Louis.