Daily RFT spotted three businesses on South Bemiston Avenue in downtown Clayton that have begun boarding up their windows. The stores -- a Potbelly Sandwich Shop, Diamond International and Tani Sushi Bistro -- are all less than a block away from the Buzz Westfall Justice Center where the grand jury has been deliberating on charges in the shooting death of Michael Brown. Their decision on whether to indict Ferguson police officer Darren Wilson in the incident is expected in a matter of days or weeks.

"It's the first phase. We're just taking a precaution for when the verdict does come," says Potbelly manager Marci Beasley. "We do probably plan on boarding up." 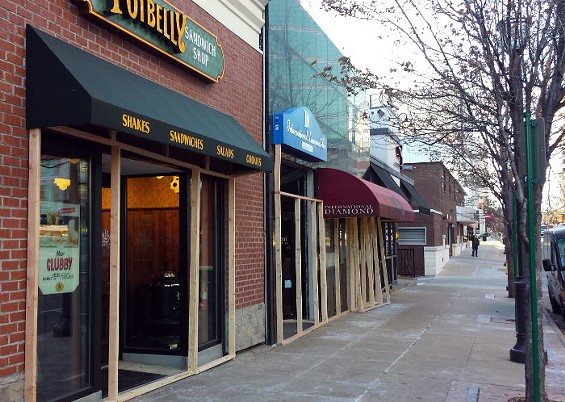 Beasley says she noticed the jewelry store next door putting up wooden frames around its display windows and thought it might be a good idea to follow suit. She says the frames are in place for now so that if anything does happen after the grand-jury decision is announced, it'll be that much easier and faster to attach the full-size boards.

"We want to be prepared," she says.

Have you noticed any other businesses in Clayton, Shaw or elsewhere in the metro area that are girding themselves for potential unrest? Contact us here: