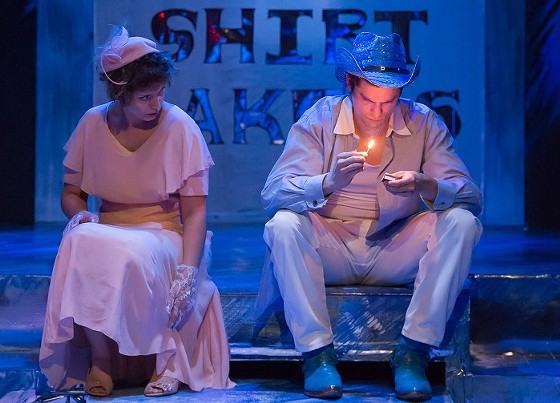 "When I look back at Stairs to the Roof...I see its faults very plainly, as plainly as you may see them, but still I do not feel apologetic about this play," wrote Tennessee Williams in the program notes that accompanied its 1947 premiere.

The playwright's clear-eyed assessment of his early work goes a long way toward explaining why this fantastical tale -- the last of his so-called apprentice plays (those preceding his breakout The Glass Menagerie) -- has been so rarely produced. A handful of student productions notwithstanding, Stairs to the Roof, which draws upon Williams' soul-crushing tenure at the International Shoe Company in St. Louis, has not been professionally produced in a U.S. theater since its premiere some 65 years ago.

The city's newest theater company, Sudden View Productions, has charged itself with the somewhat grand duty of revivifying Stairs, staging a visually engaging if at times bumpy production of Williams' ambitious, soulful, but heavy-handed work. Williams drew on several previous stories to create Stairs, which follows the peregrinations of Benjamin Murphy (Paul Cereghino), a dreamer who pines for a nebulous freedom after discovering a hidden flight of stairs at his factory job. Sensing the seeds of broader discontent, his boss, Mr. Gum (Peter Mayer), puts Ben on notice, sending him on a liquor-fueled flight of existential reckoning, where Ben seeks liberation from his alienating job, his loveless marriage and the myriad disappointments of middle age and mediocrity

Boozey and brooding that evening, Ben encounters The Girl (Em Piro), who's in a cage of her own -- albeit one fortified by received wisdom about love. Together, they share a fantastical night together, tasting the delights of temporary freedom, as Williams uses heavy symbolism to illustrate their plight -- dancers that embody the pair's emotions, a play-within-a-play at a dream-like carnival, and a quixotic mission to free foxes from the local zoo.

Directed by Fred Abrahamse, Stairs labors to achieve a unified metaphor. Everyone is part of an alienating mechanical system -- either a victim caged by their relinquished dreams, or a boss that would exploit them. It's a bleak, binary vision that also feels suffocating and callow, lacking nuance as the playwright moves disjointedly from one (occasionally ponderous) scene to the next. Nevertheless, there are also moments of breathtaking poetry here, where Williams' unabashed lyricism takes flight -- a harbinger of the beauty and depth to come.

Staged in the marvelously refurbished Boo Cat Club (which could use theater seating more comfortable than the medieval implements currently on offer), the production's most striking element is its visual language. Marcel Meyer's silvery art deco set brings to mind the sleek, alienating world of Fritz Lang's Metropolis, and his costumes -- decking out workers in black and white, protagonists in bright colors, and dressing carnies as swamp beasts and harlequins -- work seamlessly with Williams' symbolic world of romantic yearning and impersonal reality. Similarly, Abrahamse uses several directorial flourishes to set the mood, with cast members moving mechanically in the opening scene, an effect heightened by Henry Palkes' score.

Artistic director Carrie Houk has assembled a cast that boasts some of the town's top talent. Piro takes a disarming turn as The Girl, albeit one with an oddly modern affect. She plays well opposite Cereghino, who's largely affecting as Ben, though he can also be uneven, occasionally playing too casually for laughs. Ben Watts, who's quickly proving himself to be one of this town's most versatile actors, plays a variety of roles, but is deliciously good as Mr. Q., while Mayer delivers a characteristically grumpy performance as Mr. Gum. Bob Harvey is cartoonish and just right in several roles, though he's particularly good as The Designer and the Zoo Keeper, while Cooper Shaw plays a termagant for the ages as Ben's wife, Alma.

The play calls for an enormous cast (there more than 30 separate roles), and many actors do well playing multiple parts. As talented as the cast is, however, there were several moments on opening night when an actor would begin to deliver a line, only to back up, give the forgotten sentence or two that should have preceded it, and then recite the aborted line as though no one's the wiser. (This is not unique to this performance. It's something that seems, troublingly, to be happening with increased frequency these days. Actors inevitably flub lines, but the real artistry lies in how they get out of it -- thinking on their feet to integrate the mistake into the performance, rather than simply hitting the theatrical equivalent of the rewind button.)

Production issues aside, however, Patrick Huber's lighting is rich and multi-layered, accentuating many of the play's more surreal sequences. Filled with pinks and yellows, Huber's work is particularly effective as Meyer's set reveals the depths of the Boo Cat Club's stage during the play-within-a-play and lovely pas de deux series (performed by dancers Clayton Cunningham and Elizabeth Lloyd).

While most of the more dream-like elements in Stairs to the Roof are easily read as allegory, the audience (or at least this audience member) spends much of the play puzzling over Mr. E. (Reginald Pierre), a mysterious figure who looms desultorily at the edge of the stage. His awkward presence doesn't make much sense dramatically -- at least not until the final scene, when Williams, seeking an optimistic ending but having bound himself with Stairs' inflexible, binary world, employs Mr. E. as a deus ex machina.

Does it work? Well... "Unskilled and awkward as I was at this initial period of my playwriting," Williams continued in his 1947 program notes, "I certainly had a moral earnestness which I cannot boast of today, and I think that moral earnestness is a good thing."

And so it is. Also good is the chance to see this seldom performed work that provides such a fascinating window into Williams' development as an artist. It's a rare gift, really, and we can thank this exciting new company for the offering.