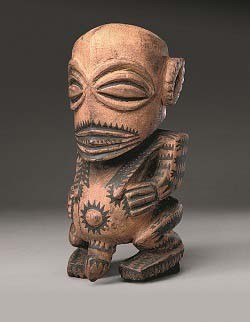 When the Saint Louis Art Museum presented Impressionist France as the inaugural show for its new Chipperfield addition, it was a safe, crowd-pleasing choice. The institution's sophomore effort in the new building, Atua: Sacred Gods from Polynesia, could not be more different. Filled with remote, otherworldly sculptures and carvings from a distant culture, Atua asks visitors to take it on faith that these strange, little-understood remnants possess a presence and power to rival the secular art that fills the museum's walls.

But faith is not a bad place to begin with this beguiling show. Culled from museums around the world, Atua presents not the religious idols and relics of a lost culture, but rather the gods themselves — divine refugees of the iconoclasm that accompanied the introduction of Christianity to Polynesia. Western missionaries (often aided by the newly converted) shattered and burned the vast majority of these carvings, destroying some "1,200 years of the artistic creations of an entire people," writes organizer Michael Gunn, a senior curator of Pacific Arts at the National Gallery of Australia, where the show originated.

The works that survived were transported as souvenirs by the explorers and missionaries, who viewed them as curiosities and religious relics. But the atua (a word that translates roughly as "god") were no mere idols. Many housed the spirits of deified ancestors. Some held dominion over small regions, or aided in navigation. Others were more powerful, affecting multiple islands and smaller gods.

In other words, through these atua, Polynesians did not merely live among their gods; they were their very descendants, making this bewitching show as much an art exhibition as it is a provisional pantheon, a reassembly of these long-banished gods.

This may all seem terribly remote, but part of what's so enchanting about this show is the mystery itself. Spend a few minutes among these carvings and sculptures — SLAM is the only U.S. venue for the exhibit — and their undeniable power bridges both centuries and cultures, giving viewers access to this enigmatic world that is so different from our own. 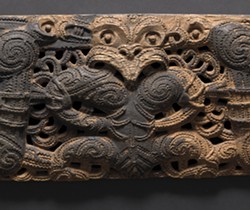 Some crudely rendered, others masterfully crafted, the atua are often hermaphroditic and wildly fertile, boasting smaller atua that sprout from their torsos and legs. Who was the animating spirit? What role did it play in the domain it presided over? These questions go largely unanswered, leaving viewers to consider the individual works on their own aesthetic terms.

Take one of the rudimentary, free-standing female figures from Fiji in the first gallery (the show is organized by island groups). Dating from the early 19th century, the muscular Female Figure has an angled mouth and asymmetrical eyes that give her a naturalistic air, as if she were looking downward. The remains of a bark-cloth turban indicate that she was probably an aristocrat. With her right hand she spreads her labia, while her left reaches around to open her buttocks. Neither sexual nor ashamed, she has a quiet power, which over time reveals itself to be by turns playful, pained, even doleful.

Unlike many of the show's sculptures, there is some background on this atua, which was purchased in 1840 by a member of a U.S. exploration party. According to the Smithsonian, which now owns the piece, it was "obtained in a consecrated grove...where a numerous party of natives had been slain and eaten.... None of the natives could be persuaded to approach the spot."

Compare that to the Head of a Rarotongan Atua from the Cook Islands. Thought to be carved in or before the early 18th century, the main face is long, narrow and angled. Its mouth and eyes are created from carved ridges, creating stylized lips, tongue, eyelids and brows that are reminiscent of modernist sculptor Constantin Brâncusi. Nearly staff-like in appearance, the main head sits atop a spine-like column of alternating male and female figures. The smaller male figures are shown in profile, their large phalluses pointed directly at the women below them, whose stylized forms appear to house several vulvas. Are these smaller figures ancestors? Are they descendants? The work refuses to yield its mystery.

Equally mysterious are the twenty or so knife wounds that scar the left cheek of the atua's main head. In Rarotonga, the natives embraced Christianity with particular zeal, often exposing fallen atua (which were normally shrouded) before laying them at the feet of Christian missionaries (a scene that's depicted in an accompanying 1837 print by early color printmaker George Baxter). In this case, though, simply presenting the atua was not enough; it appears someone tried physically to kill the god within.

A similar humiliation befell what is arguably the show's most well-known work, the Deified Ancestor with the Name A'a, which was created on the Austral Islands in the late 18th or early 19th century. Standing just under four feet tall, the wood figure has the arms, legs, torso and genitalia of a man. Viewed from the side, however, the figure reveals itself as an erect phallus. Meanwhile, smaller, humanlike figures sprout everywhere, replacing the atua's eyes, nose, mouth and breasts. These smaller figures emerge from the larger sculpture's legs and torso. They act as ears and dangle from its chin. The figure is believed to be A'a, a deified ancestor of the people who originally populated the island. To that end, the figure's back boasts a hatch that once housed some 24 smaller atua.

But like the Head of a Rarotongan Atua, A'a was handed over to missionaries when the natives converted to Christianity. Collected by Reverend John Williams in 1821, the missionary described A'a's fall in an account of the expedition. "The chapel was lighted up with ten chandeliers, made of wood neatly turned; cocoa-nut shells were substituted for lamps," he wrote, noting how the light greatly impressed the natives. "In the course of the evening the rejected idols were publicly exhibited from the pulpit. One, in particular...excited considerable interest; for, in addition to his being bedecked with little gods outside, a door was discovered at his back; on opening which, he was found to be full of small gods, and no less than twenty-four were taken out, one after another, and exhibited to public view."

Like so many others, those 24 smaller atua have been lost to history, making those divine exiles that now comprise this magnificent show all the more valuable.