Dirty Dancing: Movie-Turned-Stage-Production Is All Left Feet at Fox Theatre

Someone, please! Shoot me now.

Rolling into town for a twelve-day stand at the Fox Theatre comes Eleanor Bergstein's Dirty Dancing: The Classic Story On Stage, the overstuffed but underwhelming adaptation of the 1987 sleeper hit that made Patrick Swayze a household name.

Neither a musical nor a dance revue, Dirty Dancing: The Classic Story On Stage seeks to recreate the original movie scene for scene, nearly line for line. The result is less a fresh re-imagining of the teen romance, and more a lumbering ticket-grab that combines the limitations of the screen with the conventions of live theater while trafficking in nostalgia.

For those unfamiliar with the tale, Dirty Dancing tells of Frances "Baby" Houseman (Jillian Mueller), an upper-class daddy's girl who, during a three-week family vacation at a Catskills resort, falls for the hotel's hunky dance instructor, Johnny Castle (Samuel Pergande). Baby may be the ugly duckling, but she has options and a social conscience. Johnny? He's a working boy with a bad reputation and a way with the ladies.

Their worlds collide when Johnny's dance partner, Penny (Jenny Winton), gets knocked up by an unctuous waiter, and Baby steps in, offering to take Penny's place in an upcoming performance. Their forbidden love blossoms as Johnny schools Baby in his dirty ways, and she, entering the realm of the senses, becomes a woman. 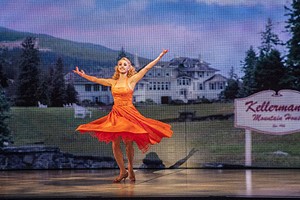 Of course, film makes short work of this sort of thing, using montage and music to establish an emotional progression. That's harder to do onstage, but it hasn't stopped director James Powell from trying. His solution, such as it is, involves Mueller and Pergande grinding out their dance/romance behind a parade of unseemly projection screens. Here they are (dancing!) imperceptible and tiny amid a field of outsized wheat. There they are (dancing!) obscured and awkward on a log in the forest. And there they are again (drowning?) in what looks like a lake.

In fact, the entire production relies too heavily on video screens, which take us everywhere from the resort's lowly staff quarters to its tony golf course. Meanwhile, Stephen Brimson Lewis' physical sets are quite simple — a few tables, a bed, maybe — effectively forcing the actors to perform in front of a giant green screen. The bright backdrops not only obscure the performers' silhouettes, they give the entire production a feel that's at once overproduced and flat — "cinematic" in all the wrong ways.

But the visuals aren't the only technical hurdle Dirty Dancing fails to clear. The show boasts some well sung musical numbers, but most of its songs sound tinny and overwhelming — often drowning out the performers as they struggle to deliver their lines. (This was compounded on opening night when the mic for Baby's mom, Marjorie (Caralyn Kozlowski), went rogue.)

Of course, the poor acoustics would be more of a problem if the script contained, say, character development, original dialogue or nuance. Instead, Dirty Dancing slouches by on platitudes, requiring its woebegone cast to deliver lines like, "It's a feeling, a heartbeat," or "We were young like you, Baby. We wanted to change everything." Bergstein has tried to inject the script with a bit of Civil Rights-era gravitas (it takes place in 1963, after all), but the social issues can't help but feel contrived, and the dialogue remains largely incidental as this disjointed spectacle unfolds 30-second scene after 30-second scene.

Nevertheless, there are some real highlights. Michele Lynch's choreography is occasionally thrilling, and both Pergande and Winton are excellent dancers. Mueller has some nice moments as Baby learning to dance, and she has good chemistry with Pergande, who, while not a terrific actor, spends much of the show in full beefcake mode, seething and shirtless. (Clearly, the producers know who butters their bread.) The orchestra also provides some much-needed live numbers, and the honey-voiced Jennlee Shallow has a few outstanding songs.

But these bright spots — and they are few and far between — aren't enough to salvage this wreck of show, which like Baby and Johnny in the lake, sinks hard and fast.