But we already knew that. When Wendy Kesselman's adaptation of The Diary of Anne Frank opened on Broadway in 1997, critics hailed it as a powerful new version that improved on Frances Goodrich and Albert Hackett's original play, giving a fuller account of the Franks' Jewishness and Anne's transformation into a young woman. Nearly twenty years later, it's a testament to Kesselman's work that many now consider her stage adaptation simply as The Diary of Anne Frank, which the New Jewish Theatre has brought to heartrending life in its season opener at the Wool Theatre.

Confined to the secret annex above Otto Frank's Amsterdam office, the Frank family lived in hiding for more than two years during World War II, as occupying Nazi forces fought a losing battle against the advancing Allies. Aided by sympathetic Dutch who brought them provisions and news from the outside world, the Franks shared their cramped quarters with another family, the van Pels, and later Fritz Pfeffer, a dentist. (Anne changed the van Pels' name to van Daan in her diary, and renamed Fritz Pfeffer as Albert Düssell.)

Careful not to move during the day lest they arouse the suspicions of the workers below, the captives nevertheless cultivated a sense of normalcy, with the families celebrating Hanukkah together and the children keeping up with their studies. Anne, who was only thirteen when she went into hiding, recorded it all in her diary, closely observing the families' cloistered rhythms as she dreamed of life after the war and underwent the rites of passage into young adulthood. 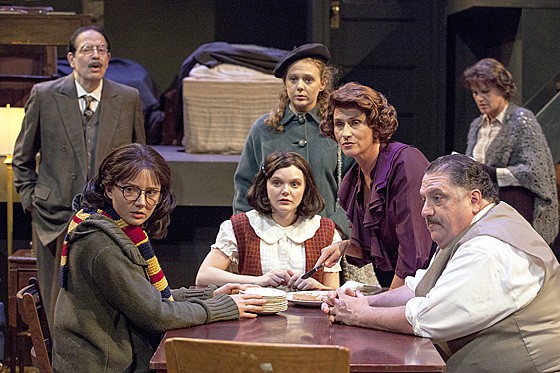 Anchored by a soulful Bobby Miller as Anne's beloved father, Otto — a man trying to protect his family but keenly aware of his limitations — the New Jewish cast performs an act of collective alchemy on Jim Burwinkel's cramped, multi-tiered set, infusing the theater with a palpable sense of the claustrophobia, dread, hope, wonder, tedium and menace that must have been the measure of their days.

In the role of Anne, Samantha Moyer is a bit strained in her excitement of the early scenes. But she quickly modulates her performance. Brimming with imagination and hungry for any vicarious thrill from the outside world, Moyer is at her best during moments of transformation. She feuds with her mother, Edith, who, as played by a captivating Amy Loui, hides her dread at the fate she fears will envelop them. That fear causes her to lose patience with Anne, whose enthusiasms risk their safety. Anne envies the poise of her older sister, Margot (a demure Taylor Steward), whom she feels gets preferential treatment, and she explores her emerging sexuality with Peter van Daan (an adolescent and awkward Leo B. Ramsey).

Meanwhile, she finds a cautionary tale in Peter's parents. Played with remarkable nuance by Jason Grubbe and Margeau Steinau, the emotionally complacent couple nearly succumb to despair as Mr. van Daan filches the last of the bread and forces his wife to relinquish a beloved fur coat. Likewise, Anne marvels at her bunkmate, Mr. Düssell (a prickly Terry Meddows), who's busy divvying up the rest of the rotten potatoes when they learn the Allies have landed.

With such a strong cast, Gary Wayne Barker is expert at amplifying the subtle emotional currents that course through the ensemble. Hope is everywhere, as their lives, though confined to only a few rooms, continue with a fullness that speaks to the resiliency of the human spirit. Where the production is less effective, however, is in those moments when this scrim of normalcy is torn asunder. While the cast certainly conveys fear and despair, these moments somehow lack the full emotional weight they should carry. Perhaps that's because they remain only moments, as opposed to a pervasive and gathering sense of dread, always just beneath the surface, that threatens to consume their "normalcy" in an instant.

What is utterly terrifying, on the other hand, is when the Nazis finally storm their hideout, destroying their home and arresting the families. The Allies would liberate Auschwitz just five months later. But by then it was too late. Anne, Margot, Edith, the van Pels and Mr. Pfeffer all died in the camps. Otto Frank was the only survivor.