For all its corpse-soldiers and intergalactic assassination attempts, Ann Leckie's Hugo/Nebula-winning 2013 novel Ancillary Justice proved most memorable as a love story -- albeit a platonic one, narrated by a spaceship who, like most readers, doesn't even recognize that this a love story until the end. Justice, Leckie's first book, spanned decades and star-systems and consciousnesses: Its chapters alternate between past and present, told by Justice of Toren, a 1,000-year-old troop-carrying vessel of the ever-expanding space empire of the Radch.

Its basics are a mouthful but well worth your time and attention. The ship relates a tale of insurgency and betrayal on one of the systems the Radch have conquered; this material, tense and surprising, feels of our global moment even as it concerns what is, in Ancillary Justice, a tragic past. Meanwhile, in the book's urgent now, a sliver of the hive-mind that once constituted that ship's full A.I. recounts a desperate errand to obtain an alien super-weapon. Leckie excels at page-turning mysteries: what that weapon is, what is to be done with it, and how a stray scrap of ship-intelligence is now independent of its greater host -- and demonstrating what appears to be humanlike willfulness.

That sliver, we learn, is one of the Radch's ancillaries, or corpse-soldiers, an indifferently gendered human body implanted with (and controlled by) the consciousness of its ship. Ancillaries see all that the ship sees, and all that every other linked ancillary sees, the perceptions of hundreds of bodies and computers uniting into one. Somehow Breq -- or Esk One -- has become separate from Justice of Toren, making this complex (but tough-to-put-down) space-opera love story also a study of loss: You might be able to imagine phantom-limb syndrome, but what could it possibly feel like to have been one of a great collective and then, suddenly, not? To have seen at once all there is to see and then just whatever is before you?

See also: Is Ann Leckie the Next Big Thing in Science Fiction?

Leckie dances between these twin narratives throughout the first two-thirds of Ancillary Justice, each offering revelations for the other. It's an uncommonly rich novel, wise about occupations and workplace politics and the fear that the all-powerful forces that employ you might be deeply mad -- and might demand of you the unconscionable. Can one mind in the hive rebel? Can individual minds develop selves beyond the collective? Can an idea-rich science-fiction story be a compelling adventure and an affecting and gently challenging celebration of all the best of humanity?

The last third of Ancillary Justice abandons the fractured narrative in favor of storytelling momentum: Breq, weapon in tow, closes in on her daft mission, which isn't quite to kill God but may as well be. It's pew-pew laser-play with wit, ingenuity, heart, and the occasional genocide. I can't recommend it enough, even to people who think they hate pew-pew laser-play.

The just-published sequel, in some ways, doesn't feel like a sequel at all. In Ancillary Sword Leckie never attempts anything like the bravura structure that distinguished its predecessor, instead offering a straight-ahead continuation of the story -- this is more Breq, not more Justice. It's still rich, strange, and humane, and it's still wonderfully eccentric: A hallmark of Leckie's creation-straddling Radchi Empire is its citizens' disinterest in the differences between genders. Breq, having been originally programmed by the Radch, assumes everyone she meets is a "she" -- and sympathetic readers will roll with this, either agreeing to think of the entire cast as female or maybe arbitrarily assigning sexes to Breq's crew and enemies. This element makes the Ancillary books a series that could genuinely be compromised by a film or TV adaptation: Once in a while, a non-Radch character will upend our perceptions by revealing whether a character seems male or female. The effect is always a jolt and a conundrum: Must you as a reader re-imagine? Or do you just roll on, still, as Breq does, liberated from even caring? 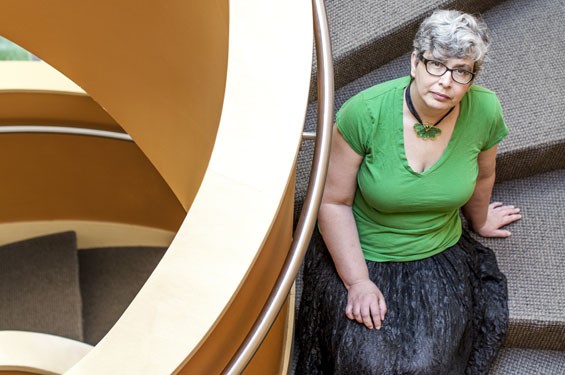 Breq cares a lot, of course, about other things, but not the usual heroic stuff. Now a high-ranking commander in the Radch fleet, she's dispatched this time to a distant system to ensure order as civil war breaks out across Radch space. (To be more specific would spoil one of the greatest revelations of Ancillary Justice, a paranoid beauty. (Let's just leave it at this: Have you ever had a boss who seems to switch between being two totally different people?) There's not much action as Breq tends to her mission; instead, Leckie gives her a series of interesting meetings in which the pragmatic -- and unfailingly justice-minded -- former spaceship deeply invests herself in the circumstances of the people she meets on a space station and a plantation planet. Breq insists on housing herself in the poorest quarters of the station, where she insults a rival captain and the wealthiest citizen; in her spare time, she collects the folk songs of the universe, and her constant humming of them distracts and annoys her crew. Eventually, she becomes caught up in the affairs of a femme-fatale type who, come to think of it, might not be a femme at all -- but whose minor cruelty has set off an interstellar controversy that we unfortunately won't see play out until book three.

As in Justice, Leckie presents Breq's moment-to-moment actions as mysteries we're invited to tease out: Why is she (she?) doing this? What is she trying to find out or prevent? Will this help?

Despite its weaponized title, Ancillary Sword is a quiet book whose plot turns on teapots and mourning rites -- in its long middle, Breq worries at problems whose full import you most likely won't apprehend until much later. Leckie's second book is not the heady masterwork of her debut, but it is in some ways as daring: She and Breq dig deep into the everyday lives of the Radch's underclasses, definitely alienating the powers that be in the book -- and possibly the pew-pew crowd in real life. Justice gave us a universe and an impossible mind to roam and maybe destroy it; Sword lays bare a world that often suggests the worst of our own -- and it shows us that mind at work. It's a privilege to witness.