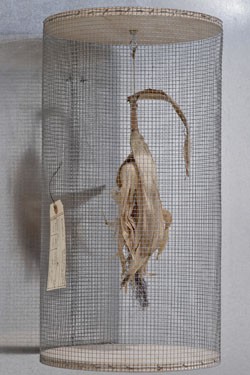 While waiting to give a lecture at the New School for Social Research in the late 1980s, the artist Mel Chin, nervous and pounding a six-pack of Budweiser before his talk, surprised the room when instead of discussing his work he jumped from his chair screaming, "This is an axe!"

"What the fuck you gonna do, man?" Chin recalls a pipe-smoking department chair asked him.

Chin didn't say. Instead, he smashed the axe — actually a sculpture he'd created from his notes, sealed in wax and shaped in the form of an axe head — into the blackboard. Following Kafka's maxim that "a book must be the axe for the frozen sea inside us," Chin then read from the notes that fluttered to the floor.

The lesson was clear: Objects have powerful cultural connotations — connotations that can be transformed through the sometimes-destructive powers of art. Chin has since reconstructed Lecture Ax, which is currently on view as part of Mel Chin: Rematch, the sumptuous retrospective of the artist's work that opened last month at the Contemporary Art Museum St. Louis.

Now in his sixties, Chin has always been hard to pin down as an artist. He traverses various media and cultures, working in video games, sculpture, collage and environmental processes — to name but a few. Chin creates marvelous objects that tackle weighty issues with a sly wit, subverting potent cultural forms — handguns and nightsticks, axes and bombs — by prodding their deeply ingrained cultural associations until the objects yield surprising new meanings. When he collaborates with others, Chin sets in motion socially freighted art projects that often obscure his imprimatur as the work takes on lives, authors and identities of its own.

For lack of a better term, then, Chin is often categorized as a conceptual artist — albeit one who is as attuned to the poetry of the idea as he is to the aesthetics of the execution. It's a high-wire act that crosses many fields, but as this absorbing retrospective makes clear, the idea of transformation has been a through line in Chin's work from the very beginning, informing everything from his early physical artworks to his later performance-based pieces.

Following Lecture Ax, Chin began a series of sculptures that sought to transmute weapons into devices that inform, heal and memorialize acts of violence. Among these works is Home y Sew 9, which presents an iconic GLOCK 9mm pistol — known as "America's Gun" because of its ease of use and popularity — along with a functional first-aid kit crafted in the form of the pistol. An angiocatheter (used to remove fluids after, say, a gunshot wound) and an ACE bandage make up the gun's barrel, while a distress beacon, saline, narcotic analgesic and epinephrine are housed in the gun's grip.

Meanwhile, Fan Club, a particularly powerful sculpture (made of a baseball bat, Chinese silk and the artist's own blood he used to paint a Japanese flag), memorializes the baseball bat assault on a Chinese American man by Detroit autoworkers who mistook him for being Japanese.

But Chin wasn't satisfied with merely making objects, and he embarked on a series of conceptual, performance-art projects that sought to address ecological and social concerns. The artist tapped the expertise of scientists for "Revival Field," a land-based project that used a class of plants known as hyper-accumulators to clean toxic soil of heavy metals deposited by industry. By absorbing the pollutants into their stems and shoots, the hyper-accumulators transformed the plot of land, removing toxins and invisibly "sculpting" the soil into a healthier environment.

"Revival Field" is an ongoing project, and Rematch, organized by the New Orleans Museum of Art, boasts several drawings, a maquette and shadow boxes from the project's early days. Similarly, Chin's more recent "Operation Paydirt/Fundred Dollar Bill Project," which seeks to redress lead poisoning in cities like New Orleans, fills large sections of the gallery. Although Chin initiated the project following Hurricane Katrina, he now has thousands of collaborators, as evidenced by a pallet stacked high with "Fundreds" — hand-drawn bills from community members — which Chin plans to deliver to Congress in exchange for real currency to remediate childhood lead poisoning.

Encompassing some four decades of work, Rematch is the sort of exhibit that demands multiple viewings. Chin's immersive collage installation, The Funk & Wag from A to Z, which subverts the encyclopedia's monopoly on knowledge, merits its own gallery and is worth a trip all on its own. Likewise, Luddites will need more than one chance to fully explore KNOWMAD, Chin's video game that brings together emerging technological and vanishing tribal cultures.

The museum's rear gallery is devoted to the somewhat facile paintings and sculptures of Texas artist Mark Flood. The exhibition space, on the other hand, has a suite of evocative landscapes by the Dutch artist Carla Klein. These haunting, monumental paintings — based on photographs — depict barren landscapes that are marked by humans but largely uninhabitable. Bleak and isolated, the paintings' sense of ephemeral detachment is accentuated by the scratches and blotches applied to their surface, making them reminiscent of vernacular photographs, which not unlike Chin's transformative oeuvre, appear both foreign and familiar.