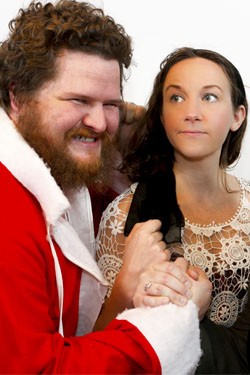 Talk about starting out with a bang.

The city's newest theater troupe, the November Theater Company, marked its debut last weekend with a production of Stephen Sondheim's beloved Assassins, the anachronistic musical with book by John Weidman that seeks to humanize those villains of history.

Directed by Suki Peters, the production experienced several...let's call them growing pains, while also exhibiting moments of real potential for a new company staging such a difficult show. Charlie Barron sings nicely as the Balladeer, providing a lighthearted foil to the dark figures that populate this marvelous play, before later appearing as a messianic Lee Harvey Oswald. Patrick Kelly, who is so ebullient you want to keep one of him in your pocket, steals many a scene as Charles Guiteau, the delusional murderer of President James Garfield. Meanwhile, Patrick Blindauer brings both pathos and humor to the role of Sam Byck, the unemployed tire salesman who planned to kill President Richard Nixon by hijacking a plane and flying it into the White House.

Mike Amoroso has some good scenes as John Wilkes Booth, and Jennifer Theby Quinn, in the role of Lynette "Squeaky" Fromme, and Jessica Townes, as Sara Jane Moore, are often funny as they plot to kill President Gerald Ford.

But while the production has some nice elements (including Jason Townes' two-tiered set), the show lacks consistent pacing — some scenes are engrossing, but too often they lack focus and urgency. Sondheim's music, as always, is a marvel, but it's also difficult to perform. Not only is the quality of voices in this current production pretty varied, but the performers also get little assistance from a tinny-sounding recording that doesn't do justice to the score. To complicate matters, several numbers were marred by technical issues on opening night — microphone feedback during some numbers and ensemble members who weren't properly amplified during others.

Still, it's always exciting to have a new theater company in town. Let's hope that once these shaky technical and production issues are steadied, this young company can focus its aim, which in this production, at least, doesn't quite hit the mark.