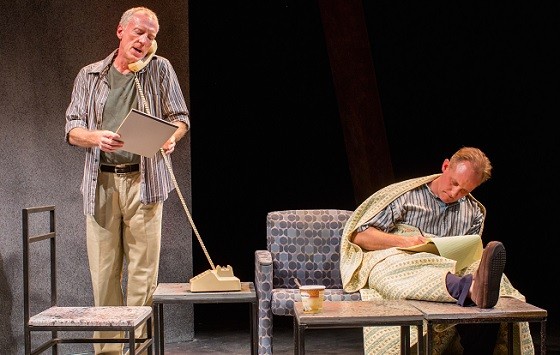 "Weakness terrifies me," Ned Weeks, the cantankerous writer-turned-activist says in The Normal Heart, Larry Kramer's seminal work about the initial days of the AIDS crisis.

Of course, nothing motivates quite like fear. And Ned, played with redline intensity by a sinuous John Flack in HotCity Theatre's heart-wrenching production of the play, attacks the burgeoning AIDS epidemic on all fronts, alienating allies while battling public indifference and private shame. The result is a marvelously textured work of theater. It's a deeply intellectual play that brings a flesh-and-blood urgency to these characters who celebrate hard-won political victories, battle their own private humiliations, seek familial love that is non-patronizing, and romantic love that is free from stigma -- all while working at a breakneck speed to raise awareness about this cruelest of diseases, one that kills through an act of love.

Set in the early 1980s, it would be easy to imagine that The Normal Heart would feel dated by now, when many view HIV as a manageable disease. But nothing could be further from the truth: While our knowledge of the disease and its treatment have improved, this production, expertly directed by Marty Stanberry, smolders with existential intensity.

Focusing on Ned, The Normal Heart has a straightforward, almost essayistic structure. As the acerbic activist blusters, bullies and screams his way through a tangle of issues and relationships, he becomes a sort of latter-day Cassandra, speaking truths no one else wants to acknowledge. But Ned is also a guide, drawing out other characters to express the myriad conflicts that hampered the gay community's initial response to the crisis.

So it is that while experts first thought the disease was a form of cancer, Dr. Emma Brookner (here played by a steely, no-nonsense Lavonne Byers) recruits Ned to the cause, telling him the disease is sexually transmitted.

"You want me to tell every gay man in New York to stop having sex?" he asks incredulously.

"Who said anything about just New York?" she fires back.

As it turns out, Ned is exactly the advocate Brookner had hoped for. Hotheaded and occasionally moralizing, Ned has an expansive vision of gayness. He feels betrayed by the sexual revolution, which he believes sold gay men short, creating a population that "singled out promiscuity to be their principal political agenda."

Ned runs into trouble, then, when he demands his fledgling activist group explicitly tell people to stop having casual sex. That conflict comes into bold relief through the impassioned speech of Mickey Marcus (a terrific Tim Schall), the mild-mannered health-department employee Ned pushes to the point of breaking.

"You're telling me that all those years of what being gay stood for is wrong...and I'm a murderer," Schall says, in one of the play's many powerful moments. "Don't you remember how it was?"

Ned also battles mightily with Bruce Niles, the closeted banking executive who becomes the group's president but refuses to be its public face. Played by Reginald Pierre, who here shows surprising new emotional range, their conflict brings a visceral intensity to the struggle within the activist community, as closeted leaders couldn't fully commit to a public campaign.

Along those same lines, Greg Johnston plays Ned's caring but patronizing brother, Ben, who insists he loves Ned, but can't bring himself to believe his brother is not somehow emotionally sick. As Ned's lover, Felix Turner, Eric Dean White becomes the magnetic, emotional core of the play, as he succumbs to the disease. The rest of the cast is equally talented, with Ben Watts, playing the level-headed Southerner, Tommy Boatwright, and the versatile Paul Cereghino and Stephen Peirick playing a host of smaller roles.

Ultimately, Ned's hard-charging brand of engagement proves too much for his fellow activists, who eventually shun him. The question in this production, though, is why didn't they do it sooner? As played by Flack, Ned spends much of show red-faced and raging. That'd be OK if the character also had charisma, but Flack's Ned -- while a very strong performance -- sings almost exclusively in the key of outrage, and his unmediated wrath and relentless grandstanding make it difficult to understand why the other characters continue to work with him as long as they do.

Except, of course, that they know he's right -- and maybe that's enough. He's a complicated character navigating complicated times, and this powerful production, filled with moving speeches and potent performances, brings it terrifyingly to life.