How do you emasculate the institutionalized bigotry that held sway for centuries in the cotton fields of South Georgia? If you're the late playwright and activist Ossie Davis, you render it in such cartoonish dimensions that its barbarity is obvious, its absurdity indisputable.

At least that's what Davis hoped for with Purlie, his musical tale of a silver-tongued preacher who schemes to trick a white plantation owner out of a church. Based on Davis' earlier play, Purlie Victorious, the musical adaptation, now given expansive treatment as The Black Rep's competent season opener, is rife with caricatures from the Jim Crow South.

Of course, the trick to a show like Purlie is to go all in. The stakes are high, and while it's not exactly a parody, the musical's exaggerated characters need real swagger if it's going to neuter systematic racism.

And for the most part, director Ron Himes and his talented cast have hit that stride. As the titular Purlie, Kelvin Roston, Jr. is a fiery and charismatic lead -- his resolve to upend the white power structure hardened by a whipping he received as a boy. Similarly, Alicia Revé is a terrific blend of naivety and strength as Purlie's fiancée, Lutiebell. All coltish legs and wide-eyed trepidation when she arrives at the plantation, her strength grows as she gains faith in Purlie, hamming it up with a slow motion embrace as he heads off to confront the bigoted plantation owner, Ol' Cap'n, a villainous James Anthony. 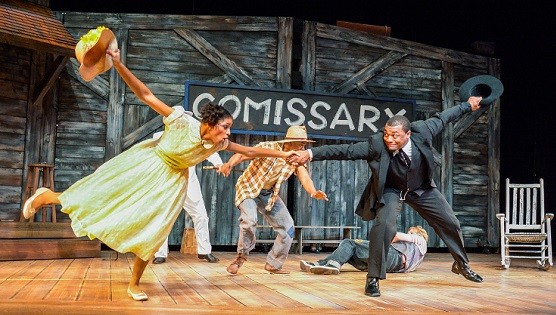 The pair is joined in their conspiracy by Ol' Cap'n's trusted servant, Gitlow, a by turns conniving and servile J. Samuel Davis, and his wife, Missy, a levelheaded Kimmie Kidd. Ultimately, though, it's not Purlie who outwits Ol' Cap'n. Rather, it's the owner's son, Charlie, an enlightened and idealistic Greg Matzker, who dupes his dad out of the church to devastating effect.

With a likeable book by Davis, Philip Rose and Peter Udell, the production hams it up to great results, rendering Ol' Cap'n's ire more ridiculous than sinister during a whipping scene. But the production runs into trouble when it comes to many of the musical numbers. Although Purlie features some great gospel, R&B and even funk-inflected music by Gary Geld, the performers' voices -- which are all quite serviceable in tone -- often struggle to fill the space, making Udell's lyrics hard to understand as the singers are overwhelmed by the accompanying six-piece band.

Still, the show does boast some great numbers. Scheronda Gregory has a star turn in the show's opener, "Walk Him Up the Stairs," a gospel roof-raiser that also features some of Heather Beal's flashiest choreography. Ol' Cap'n and Charlie's "Big Fish Little Fish," is a hilarious paean to entitlement, and the cotton pickers' serenade to Ol' Cap'n, "Great White Father," has biting lyrics like, "If it's love you want then don't be shy, come kiss our black behinds." It's just a shame we can't hear more of them.

Dunsi Dai has crafted a superb set -- one that quickly transforms from a church, to Purlie's home, to the commissary, and back again -- giving the production a real sense of place. Precisely when the story takes place, however, is another matter. The program notes say the action unfolded "not too long ago." Fair enough, but when? Outfitted in their Sunday morning finery, the women dress like they're in the late 1950s or early 1960s. Ol' Cap'n, for his part, appears to frequent the same haberdasher as Colonel Sanders, while his son, Charlie, wears Summer of Love-vintage patches of peace signs and victory fingers. While certainly not devastating, the costumes, by Jennifer Krajicek, are confusing to the point of distraction.

But perhaps these anachronisms are deliberate. After all, while it may be tempting to suppose that a show like Purlie gains fresh urgency in the wake of Ferguson, its over-the-top depiction of calcified racial attitudes stands more as a reminder that Ferguson -- whether it be in the cotton fields of Georgia in the 1950s, or the suburbs of St. Louis in the 2010s -- has been happening for years.