The Rep's "Two Guvnors" Offers a Smorgasbord of Bawdy Laughs 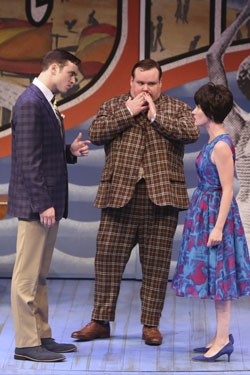 Be careful where you sit during One Man, Two Guvnors, Richard Bean's hysterical, topsy-turvy comedy that marks the impressive launch of the fall season at the Repertory Theatre of St. Louis.

Sit too close, and the evening's ebullient star, Raymond McAnally, is likely to pull you onstage, dragooning you to do his dirty work before impugning your sexual predilections, as he did a pair of silver-haired gents on opening night. Sit on the aisle, and you may find yourself wearing a straw hat, coerced into a seductive chair dance with a fella in frilly sleeves festooned with flowers.

Adapted from a commedia dell'arte farce by the eighteenth-century Italian playwright Carlo Goldoni, Two Guvnors takes place in the Brighton of 1963, opening as Charlie "The Duck" Clench is feting his dim-witted daughter Pauline's engagement to Alan, an actor given to grand gestures. Pauline had been promised to a low-level crook named Roscoe, but when Roscoe wound up dead after tussling with his sister's lover, Stanley Stubbers, Pauline could marry for love. 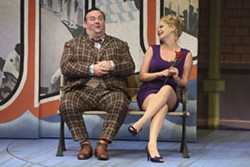 Just as they're toasting the young couple, however, in walks none other than Roscoe himself, demanding Pauline's hand and the dowry he'd been promised. The thing is, Roscoe is not Roscoe at all. It's his twin sister, Rachel, who, in disguise, plans to collect the dowry so she and Stanley can flee to Australia. The Duck heads into a frenzy, trying to scrape together the dowry, as Alan pines for his intended and Stanley descends on the seaside town, hoping to rendezvous with Rachel before fleeing to that armpit, known here as Australia.

At the heart of it all is Francis (McAnally), a gofer driven by his human needs. Francis may be Roscoe's muscle, but he's hungry, you see, and since his current employer pays him only once a week, he hires out his services to another guvnor — one who promises to pay him by the day, but who insists on secrecy.

Directed by Edward Stern, the show's tightly choreographed near misses and chronic deceptions are amplified by McAnally, a protean physical comic who pushes the play's already frenetic pace into an electric storm of chaotic hilarity. As McAnally does his able best to be two places at once, his real aim is filling his belly. To that end, he ad-libs lines (it really is a different play every night), makes asides about the show, invents new characters, falls to the ground squirming and brings a metaphysical urgency to his cry for "fish and chips."

With an impressive set featuring moving concentric circles by Scott C. Neale, McAnally is aided in no small part by the rest of Two Guvnor's terrific cast. As the histrionic Alan, Luke Smith is as distraught as Hamlet, comparing destiny to a bus line and wielding a butter knife to regain his daffy fiancée, Pauline, a winning Karis Danish. Jack Fellows is clubby and smug as the hirsute Stanley Stubbers, and Keira Keeley is a wonderfully benign gangster as Stanley's intended, Rachel/Roscoe. Perhaps the show's real standout, though, is Evan Zes in the role of Alfie, an octogenarian waiter whose pratfalls are timed to the speed of his manual pacemaker. Grant Olding's songs make for sweet little entr'acte interludes performed by a charming four-piece boy band that's occasionally accompanied by a cast member.

Maybe it's that we've simply grown accustomed to McAnally's antics by the end of the first act, but by Act Two the comedy takes a decidedly more measured form as Francis, having finally eaten, turns his eyes toward bedding the voluptuous Dolly, an enterprising Ruth Pferdehirt. Though the show remains very funny, its intoxicating sense of hilarious disorientation is reined in a bit as the comedy hurtles toward its resolution.