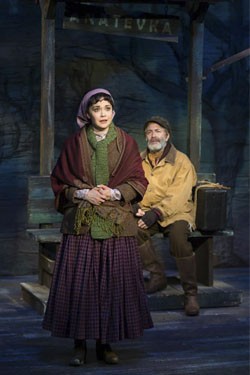 Stages St. Louis closes its main-stage season with that most traditional of musicals, Fiddler on the Roof, and like the show's opening number, "Tradition," director Michael Hamilton calls upon the Tony Award-winning show's estimable history to deliver a bright production, filled with sumptuous choreography and impressive musical numbers.

Starring the versatile Bruce Sabath in the role of Tevye, the put-upon dairyman whose plans to marry off his daughters are upended by the waves of societal change, the show is at its best during the high-polish numbers. Nowhere is this more apparent than in numbers such as "To Life," where Jerry Bock's music and Sheldon Harnick's lyrics are woven seamlessly with Jerome Robbins' mind-bendingly intricate choreography (here reproduced by Gary John LaRosa). As Tevye toasts his daughter's engagement to the aged butcher, Lazar Wolf (Christopher Limber), Jewish bar patrons and young Russians weave in and out of each other, their supple bodies forming an acrobatic loom as patterns form and quickly dissolve — like the engagement they are celebrating. 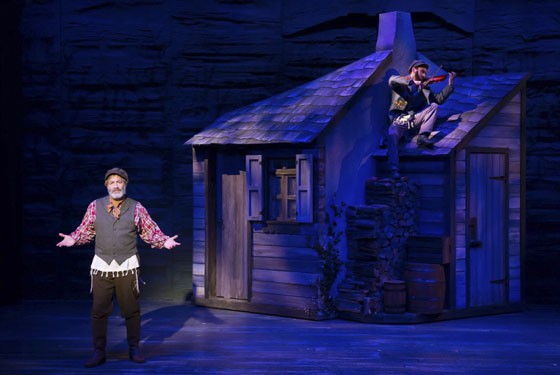 But the quieter numbers are equally impressive, as when Tevye and his wife Golde (a formidable Kari Ely) are joined in "Sabbath Prayer" by other villagers who appear nearly spectral, illuminated behind scrims on James Wolk's lovely set. Similarly, "The Dream" is at once nightmarish and gleeful as Tevye describes his prophetic "vision" to Golde, convincing his wife that their daughter, Tzeitel (a clear-voiced Stephanie Lynne Mason) should break her engagement to the butcher and marry instead the young (though penniless) tailor, Motel (Nick Orfanella).

Lou Bird's costumes are beautifully conceived throughout the musical, with each of the show's many characters clearly defined by their clothing, but he outdoes himself in "The Dream," as Grandma Tzeitel (Hannah Kiem), in a white gown, and Lazar Wolf's deceased wife, Fruma-Sarah (Lauren Roesner), masked and on stilts, appear in a musical phantasmagoria, convincing Golde that Tzeitel should not marry the butcher. Robbins' choreography simply shines in the number, as it does in Tzeitel's subsequent wedding — though particularly in the "Bottle Dance."

As the show darkens, and the Jews are forced once again to decamp from their village, Julie Hanson delivers a heartfelt rendition of "Far from the Home I Love," as Hodel boards a train to Siberia to live with her agitator fiancé, Perchik (Jason Michael Evans). Similarly, Carissa Massaro is heartbreaking as Chava, everyone's favorite daughter who pushes Tevye one marriage too far when she plans to wed the gentile Fyedka (Eric Van Tielen).

With its heavy reliance on past performances, this is not a production that breaks new ground. Rather, like Tevye, it hews to tradition, which in the case of Fiddler is filled with riches.