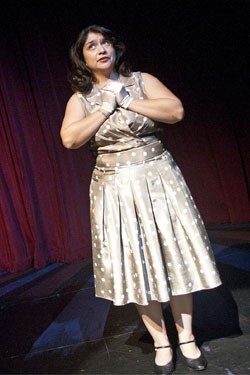 If you've ever wondered how Mamie Eisenhower, lonely and a little tipsy on her birthday, responded to the Little Rock Nine crisis, allow playwright Michael John LaChiusa to enlighten you: She traveled back in time, by boat, to confront her philandering husband about his mistress/chauffeur, Kay Summersby.

Vain, childish, self-pitying and self-absorbed, Mamie is but one of the women trapped by the office of the presidency in First Lady Suite, LaChiusa's surreal and somewhat facile chamber musical now featured in a bumpy production by R-S Theatrics. Often employing the metaphor of flight, the show plays fast and loose with the veneers of fame, imagining the unknown and dreamlike inner worlds of these public figures as they hurtle through the air, freed from the confines of the White House.

Bookended by a pair of group numbers, the show works in chronological reverse, using individual and largely unrelated scenes to imagine the personal lives of Jacqueline Kennedy, Mamie Eisenhower, Bess Truman and Eleanor Roosevelt. What exactly are those fantasies? Who are these women? Well, that remains pretty murky. Using a host of personalities from the grab bag of history, LaChiusa often imagines these women through their assistants and confidantes — leaving the first ladies themselves unknown, while also taking great liberties to envision, often glibly, the private struggles of these very public lives.

Thus the show begins with "Over Texas," where Jackie O's assistant, Mary Gallagher (Katie Donnelly), slips into a dream while flying to Dallas. LaChiusa's complex score, here featuring only two live pianos (Nick Moramarco and Leah Luciano) is by turns harmonious and dissonant as Jackie (Christina Rios), dressed in her iconic pink suit, is melodiously bound by convention, singing, "All that I can do is smile and wave and smile and wave."

It's probably not too far from the truth, but then comes the play's troubling second scene, "Where's Mamie?" which features Mrs. Eisenhower (Elizabeth Van Pelt) — that paragon of duty and decorum — getting sloppy. As she complains that the crisis in Little Rock is ruining her birthday, in walks (who else?) the trailblazing African American contralto, Marian Anderson (Jeanitta Perkins) to plead with her about Arkansas. But Mamie has other plans, and soon the zany pair is rowing their way back to Algiers so Mamie can win back Ike after hog-tying his mistress.

Directed by Shualee Cook, the production suffers some considerable inconsistencies. The score calls for a range of singing styles — with some performers near operatic while others sing straight musical theater — but the quality of voices varies significantly. It makes for some unintended discordant harmonies, sure, but there's a bigger problem here: LaChiusa's score is musically demanding. One song blends into another, often requiring performers to make sudden shifts as they carry lengthy medleys. Without consistent voices, some sections feel labored, and the show, already fractured, flirts with incoherence.

There are some good performances. Christina Rios sings beautifully as Margaret Truman in "Olio," the show's third, shortest and funniest act. She's aided, or rather heckled, by Nathan Robert Hinds, who plays her hard-drinking and cough-drop-chewing mother, Bess.

But Suite's most intriguing act is also its last: "Eleanor Sleeps Here," which recounts a flight Eleanor Roosevelt (Kay Love) took over Washington, D.C., with Amelia Earhart (Belinda Quimby). The pair is joined by Lorena Hickok (Rachel Hanks), the journalist rumored to have been the first lady's lover. Hickok, known here as Hick, turns morose as complains of sacrificing her career for Roosevelt. But as Hickok threatens suicide, Roosevelt remains fascinated by the experience of flight, focusing on Earhart and gaining strength from the insight of others. It's a rich emotional triangle, and the most fully realized and least obvious in the entire play.

Roosevelt is free as she flies. She never lands, but rather is joined in the final scene by the rest of the First Wives Club, soaring into the unknown. It's a poetic image, no doubt, but it's also an unlikely coda to this production that never quite gets off the ground.