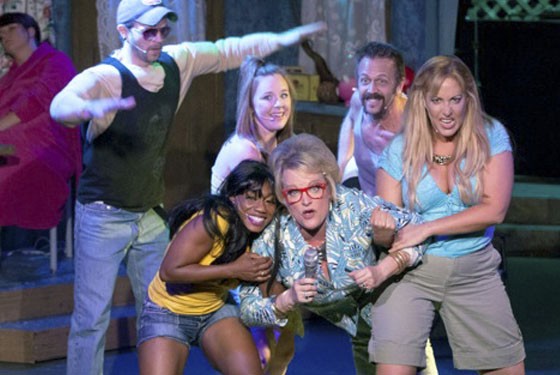 Stripping," says Pippi, an exotic dancer on the run from her bad-seed boyfriend in David Nehls' crowd-pleasing tuner, The Great American Trailer Park Musical, "is like an all-you-can-eat waffle bar: You need to know when to walk away."

The same might be said of Dramatic License Productions' hilarious rendition of the show, which plays hard for laughs, serving up reheated white-trash stereotypes and a plot as thin as the strawberry syrup at IHOP. But like any good waffle bar, walking away is easier said than done. The show is an unabashed buffet, both salty and sweet, and while it definitely satisfies those twin cravings of the American diet, its empty calories may leave you feeling bloated when it comes time for the check.

But maybe that's not right. Maybe, after a summer filled with musicals, this uncomplicated, funny and occasionally raunchy show is better seen as a palate cleanser before the meaty fall season. 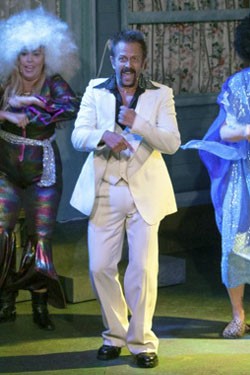 No matter. Guilty pleasure or refreshing confection, Trailer Park's a blast, chronicling the lives of the down but definitely not out residents of Armadillo Acres, an end-of-the-line vehicular community in Stark, Florida. Sumptuously directed by Alan Knoll, the show tells of a love triangle between toll-collector Norbert Garstecki (Jeffrey Pruett); his agoraphobic wife, Jeannie (Jamie Lynn Eros); and Pippi (Leah Stewart), the aforementioned stripper who takes up residency while hiding out from her magic marker-huffing boyfriend, Duke (Luke Steingruby). Rounding out the cast are veteran Armadillo residents Betty (Kim Furlow), the park's mother-hen widow; Linoleum (Stephanie Merritt), whose husband's on death row; and Pickles (Stephanie Benware), the dullest bulb on this string of Christmas lights who's also given to hysterical pregnancies. Together, these three narrate the story, filling in for smaller roles and generally hamming it up as they have ancillary tribulations of their own.

As for character development, you won't find much in Betsy Kelso's book or Nehls' lyrics. What you will find, however, are some witty and tuneful songs, like "Flushed Down the Pipes," Jeannie's twangy, cleaning-supply-inspired song of lost love, where she sings, "It's like the 2000th flush between me and my man." But this soulful lull is brief, and the high-energy show quickly follows her lament with "Storm's A-Brewin'," the riotous, disco-themed First Act closer replete with rainbow-colored jumpsuits and blond Afro wigs.

With an easily transformed set by Kyra Bishop, Trailer Park is the sort of show — the campier, the more DIY the better — that's well suited to small spaces (in this case a storefront in the Chesterfield Mall) and limited budgets — major props to costume designer Lisa Hazelhorst for the homemade "Frankie Says Relax" T-shirt. The cast is clearly having a ball, with standout performances by Stewart, an athletic performer with serious pipes; a well-meaning Pruett; and a tender Eros.

While some lyrics are swallowed by clumsy phrasing, the cast's raw energy and the show's brazen desire to please means Trailer Park is the theatrical equivalent of a waffle topped with Reddi-wip — the sugar high may be short-lived, but it's sure sweet while it lasts.