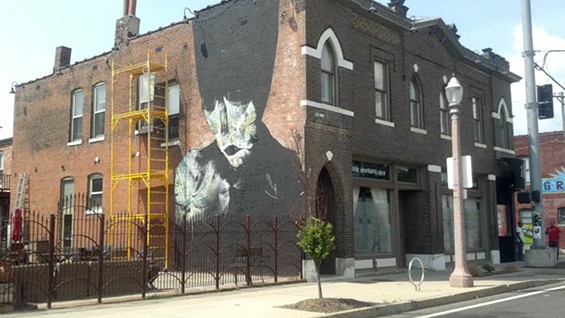 This is why we can't have nice things.

Some idiot vandalized the latest work from new-to-St. Louis artist Faring Purth Thursday. Owners at Sanctuaria in the Grove commissioned Purth to create a mural on the restaurant's east-facing wall, near their new outdoor conservatory, after she completed her larger-than-life, haunting painting of a woman at Cherokee Street and Jefferson Avenue. 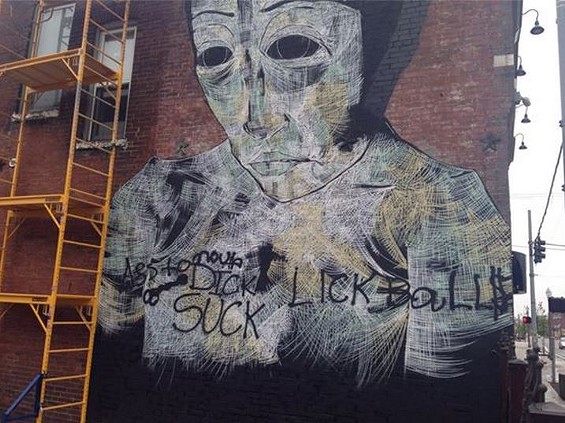 Purth, a nationally-renowned artist and painter, landed in St. Louis in early 2014 after spending years traveling. Purth has said she found her way to Cherokee Street, developed deep connections with new friends and decided to settle down in the Lou indefinitely.

But after she began her new work on Sanctuaria's patio, someone thought it'd be hilarious to graffiti her still-in-progress mural with a string of explicit words: "ass to mouth dick suck lick ball$"

The vandalism seems designed to shock passers-by with its vulgarity, but it just looks juvenile and desperate when juxtaposed against the evocative, black-and-white female figure Purth is slowly bringing to life.

Purth, who's seen her work defaced before, isn't granting media interviews before the work is complete, but on Facebook, she assured fans that she's not letting the vandalism get to her, saying she would not "privilege hate with hate:"

Back to work, indeed.