Grease: Hot-Rod Musical Fires on All Cylinders at Muny 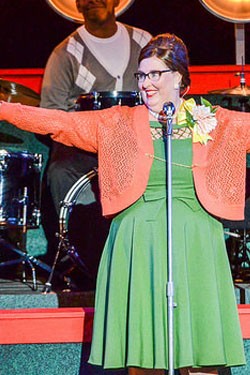 When a healthy contingent of Munygoers arrives at the outdoor theater garbed in poodle skirts and pink satin jackets, you know you're not in for a night of just any musical theater. You're in for a phenomenon — the phenomenon that is Grease, that nostalgic tale of good girls and greasers that was a Broadway hit before being immortalized in the 1978 film version that starred John Travolta and Olivia Newton John. The film went on to gross nearly $400 million in global sales. It produced a Billboard-topping soundtrack and spawned four Top Ten singles, forever lodging Zuko, Sandra D. and the rowdy miscreants of Rydell High in our collective cultural consciousness.

So sit back, Fruit Boots. It's gonna be a gas.

See slideshow: Behind the Scenes of 'Grease' at the Muny in Forest Park

Directed and choreographed by Denis Jones, the Pink Ladies stumbled early on opening night, their somewhat muddled harmonizing in "Summer Nights" outmatched by the lockstep T-Birds. But the Ladies quickly recovered, with Marty, a starry-eyed Natalie Kaye Clater, bringing her fabulist blend of fantasy and bravado to "Freddy, My Love," and Rizzo, a tough but tender Arianda Fernandez, biting in her mocking ode to chastity, "Look At Me, I'm Sandra Dee."

But the girlish heart of the show, written by Jim Jacobs and Warren Casey, remains Louderman. With her astonishingly clear voice and fresh-faced charm, Louderman fluidly transforms from a good girl in a poodle skirt into a vixen in heels through numbers like "Hopelessly Devoted to You" and "You're the One that I Want." She also has nice chemistry with Espinoza's Zuko, who's very funny as he jogs around stage with a cigarette in his mouth, trying to hide his true feelings and save face with the T-Birds.

Funny, then, that the production's real showstoppers — and there are a few of them — don't belong to Danny and Sandy. Rather, Danny's sidekick, Kenickie (Drew Foster), commands the stage in "Greased Lightnin'," a frenetic performance that transforms his ride from hoopty to hotrod before our very eyes. The Muny's new screen works overtime here, as Timothy R. Mackabee's ingenious set of lockers and bleachers transforms into, of all things, a car wash. Similarly, Vince Fontaine (Matt Saldivar) leads the ensemble through a terrific rendition of "Born to Hand Jive," a wildly complex and entertaining bit of choreography that has the cast weaving in and out of each other at breakneck speed. But the show's real standout is Teen Angel, the booming Teressa Kindle, who gives Frenchy (Madison Johnson) the straight dope in her hilarious but poignant "Beauty School Dropout."

Other standouts include Larry Owens in the role of Roger, who along with Jan (Amelia Jo Parish), has one of the night's funniest numbers in "Mooning," a double-entendre-laden love song. Also, hometown favorite and cast member of NBC's The Office, Phyllis Smith, turns in solid work as the clueless Miss Lynch.

The production is not without its awkward moments, but those have mainly to do with the Muny's new screen, which is frankly overused. In the otherwise marvelous "Greased Lightnin'," for instance, the screen takes us everywhere from a mechanic's shop to a rollicking car ride through a planned community that appears to date from the mid-1990s. Similarly, Espinoza's otherwise lovely "Sandy" turns cringe-worthy when a Jumbotron-sized Louderman looms above the stage like a float from the Macy's Thanksgiving Day Parade.

But these moments are thankfully brief, and the cast serves up this crowd-pleasing tuner with all the unruly hormonal drive we've come to expect from Rydell's Class of 1959, which, seeing as how this is the Muny's sixth time staging Grease, goes together like rama lama lama ka dinga da dinga dong.