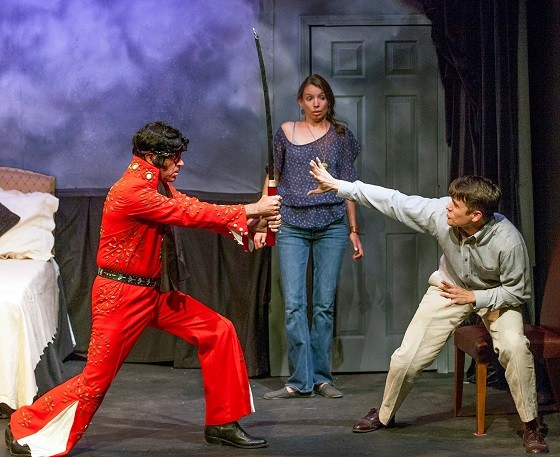 Round two of the LaBute New Theater Festival continues this weekend at The Gaslight Theater, and as a general rule, the one-act plays of the second half are much stronger than those of the first. Many earlier works relied on a similar narrative conceit -- strangers meet, secrets are revealed -- but this new raft of plays is more ambitious. The short pieces feature supple writing, plot twists, and plausible resolutions, making for a night of varied and fully fledged dramatic works.

The evening starts with John Doble's Coffee House, Greenwich Village, a tale about a blind date at a coffee shop that's romantically successful, but ends terribly for the waiter. Directed by John Pierson, Coffee House is rife with existential questions and social transgressions as Jack (Nathan Bush) and Pamela (Ellie Schwetye), who met through that OKCupid for eggheads, the classified section of The New York Review of Books, play their game of seduction -- she drawing close as he imagines robbing a store, but recoiling each time he makes a more traditional pass. Their wide-ranging conversation evolves over cups of espresso, all brought to them by a surly waiter (Paul Cereghino) who takes a shine to Pamela.

As the date unfolds, Pamela pushes Jack. The waiter pushes Jack. And Jack, who boasts early and often that he could do "anything," eventually pushes back. Brutally.

It may be an obvious denouement -- in fact, it's so inevitable the show might as well be subtitled "Chekhov's Knife" -- but Doble's writing is crisp, fluid and smart. The acting is strong, and despite the play's somewhat tired inevitability, it's engaging and adheres to its own dramatic logic.

A very different world unfolds in Susan Steadman's The Thing with Feathers, a saccharine tale of the power of poetry. Also directed by Pierson, Feathers tells the story of Aaron (Chopper Leifheit), an English teacher who was arrested and hospitalized after getting into a fight while defending his gay friend. Shackled at the hospital, he meets Mara (Caroline Adams), a hard-boiled, legally emancipated girl who's given to taking grammatical liberties.

Steadman's writing is graceful, and as Aaron quotes Yeats, Plath, Parker and Sandberg -- all while being hectored by a policeman (G.P. Hunsaker) -- he slowly chips away at Mara's tough-girl façade. It's a somewhat trite story, implying as it does that a twenty-minute conversation will somehow redirect this hardened girl's trajectory, but the dialogue is persuasive (if at times overly Norton Anthologized), and the actors deliver touching, convincing performances. 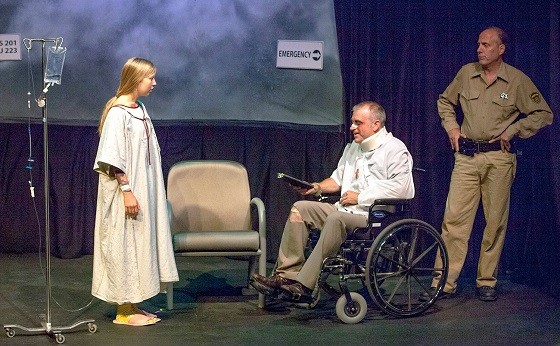 Offering a respite from all this realism is JJ's Strong's hilarious Comeback Special, which tells the story of Jesse (Cereghino) and Bonnie (Schwetye), a couple who stop off at Graceland during a miserable voyage to New Orleans. Ducking past the red velvet ropes, they make it to Elvis' private bedroom -- the inner sanctum with en suite bathroom where the King was biologically dethroned. But as Bonnie tries to persuade Jesse to make "Burning Love" on the bed, in walks the King himself (Leifheit).

Evidently, the King's in a jam. He's "stuck," you see, trapped in a cycle of eternal recurrence. Each night he pops pills, heads to the john and expires -- only to rise again the next day with a wicked head, leaving him in desperate need of some chemical healing. Elvis needs to die differently, and this funny, absurd play, directed by Tom Martin, charms as the King flirts with Bonnie and tries to convince Jesse to end the cycle.

The night's final performance is Neil LaBute's Here We Go Round the Mulberry Bush, which has played every night of the festival. Directed by Milton Zoth, the play tells the story of Kip (Reginald Pierre), a father who confronts convicted pedophile Bill (William Roth), warning him to stay away from his family. For those who saw the play during the first part of the festival, it's fascinating to see how these two actors' performances have evolved, becoming subtler as they tease fresh nuances from the script.

Presented by the St. Louis Actors' Studio, the shows vary in quality. But these fresh works, like the festival they comprise, drive home the fact that they are living, breathing things -- engaging but flawed -- and that's what makes them so riveting.