Stages St. Louis Produces a Winner in "How to Succeed in Business Without Really Trying" 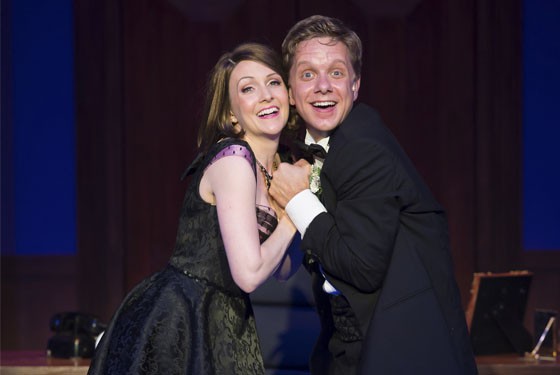 Summer is the season of musicals in St. Louis, and one of this season's most luminous stars is no doubt Stages St. Louis' relentlessly peppy rendition of How to Succeed in Business Without Really Trying, the delicious 1961 send-up of corporate culture, midcentury gender roles, and scheming one-upmanship — all set to cheerful, toe-tapping song.

Directed by Michael Hamilton, Stages has spared few expenses on the Pulitzer-winning favorite, delivering a production rich in clever sets, marvelous costumes and boasting an unsinkable cast that performs Frank Loesser's frothy score with near manic zeal. It's the sort of winning, fast-paced production that has the audience grinning from the opening moment J. Pierrepont Finch (that's Finch, F.I.N.C.H.) descends from his window washer's scaffold till he closes the show, a fat cat in a pin-stripe suit.

Starring an indefatigable Ben Nordstrom as Finch (that's Finch, F.I.N.C.H.), How to Succeed charts his meteoric rise from lowly maintenance man to chairman of the board of World Wide Wicket. Following the advice of a Machiavellian tome, the Young Turk leapfrogs his competitors. He drops names. He passes up smaller advancements for larger promotions. When he learns his inept new bombshell of a secretary is his boss' mistress, he sets her in the path of a lecherous executive whose job he assumes when the philandering exec is abruptly transferred to Venezuela. Finch (that's Finch, F.I.N.C.H.) takes up knitting. He feigns working weekends. He roots for his boss' alma mater and generally ingratiates himself to anyone and everyone, before ultimately (it is a musical, after all) discovering the one thing success cannot provide: You know, love.

With an evergreen book by Abe Burrow, Jack Weinstock and Willie Gilbert, the Stages cast plays hard for laughs, prancing, preening and pratfalling its way through many of the show's clever numbers like "Coffee Break" and "Grand Old Ivy." Particularly good is Joseph Medeiros as Bud Frump, the boss' sniveling nephew who relies on his family name to advance. Both Nordstorm and Medeiros are gifted performers, and they bring an infectious, comic energy to the stage as they strive to advance at WWW.

Along with Stephen Bourneuf's frenetic choreography, Jeff Shearer and Lou Bird's superb costumes work subtly to accentuate the score. Particularly striking are numbers like "A Secretary Is Not a Toy," where the secretaries, each wearing a different bold color, appear like so many tubes of lipstick, or "Paris Original," where the secretaries appear in matching outfits they believed were bespoke. The choreography and costumes are slickly integrated with James Wolk's smart set design, especially in numbers like "I Believe in You," where each gray-suited exec stands behind a moveable washroom mirror, while Finch (that's Finch... oh, you get the idea), dressed in an azure suit, stands before a mirror center stage.

Other cast standouts include Betsy Dilellio as the love-struck secretary, Rosemary Pilkington, and Whit Reichert as the boss, that old irascible softy, Mr. Biggley. Claire Neumann brings a seen-it-all skepticism to the role of Smitty, and Heather Ayers is hilarious as Mr. Biggley's sexpot mistress, Hedy LaRue. Of course, any production of How to Succeed would be incomplete without a winning rendition of that paean to corporate servility, "Company Way," and Bill Bateman nails it as the nebbishy mailroom manager Twimble.

It's a hard-working show that's hard not to like. The cast makes it look easy — almost like they've succeeded without really trying.