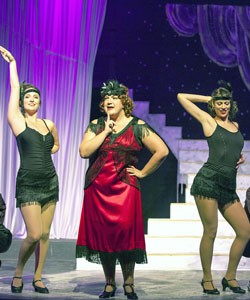 There are really two stars in any revival of Funny Girl, the much-lauded but rarely produced musical now playing at Stray Dog Theatre: Barbra Streisand and whoever else happens to be cast in the role of Fanny Brice.

That may sound unfair, but there's a reason this beloved show, which tells the tale of Brice's rise to stardom at the Ziegfeld Follies, has never been revived on Broadway: Rarely has a role been so closely associated with an individual performer as Fanny is with Barbra. Her turn in the 1964 Broadway musical, which ran for more than 1,300 performances, catapulted Streisand to superstardom, a state of grace she beatified with an Oscar for the 1968 film version.

Yes, Barbra owns it. But Funny Girl, with its clunky book by Isobel Lennart and its touchstone score by Jule Styne and Bob Merrill, is daunting to produce for other reasons as well. It demands a nontraditional star with pluck, heart and great comedic timing. She must possess a commodious voice, one that's silky yet strong as it polishes darling gems like "Who Are You Now?" and "Don't Rain on My Parade." What's more, it's a big show: The setting must transform from Fanny's humble roots to the opulence of the Follies. Oh, and along the way there must be a palpable attraction between Fanny and her improbable playboy lover, Nick Arnstein.

For the most part, director Gary Bell has found an effective Fanny in Lindsey Jones, a Stray Dog veteran with a strong natural voice and marvelous outsized features. As the brassy, uncouth Fanny — an aspiring starlet who fails her first audition but is determined to rise above the rabble — Jones uses her goofy wit and vocal talent to dragoon Florenz Ziegfeld (Michael Monsey) into keeping her on as an unconventional star. Although Jones is more successful with the ballads (giving a particularly good rendition of "People") than the uptempo tunes, she generally delivers a solid vocal performance, hamming and glamming as she moves seamlessly from the streets to the stars.

But her performance — and the show itself — stumbles on her unlikely romance with Arnstein, a miscast Jeffrey M. Wright, the soigné gambler who's given to making and losing fortunes. Put simply, Wright and Jones have about as much attraction as a pair of repellent magnets. It's a strange out-of-body experience watching these two onstage: Sure, they say all the things lovers say — songs of seduction, songs of matrimony and heartbreak — but those words just clang about mechanically. They don't track with the physical truth unfolding onstage. It's sort of like watching a theatrical version of Woody Allen's What's Up, Tiger Lilly?, where Allen dubbed over a Japanese spy movie with an original script about egg salad.

There are bright spots, of course. Robert Lippert's simple set, based around a staircase that serves as everything from the Follies' grand entrance to Fanny's humble porch stoop, works overtime. Similarly, Zach Wachter turns in a strong performance as Eddie Ryan, the lovelorn dance director who gives Fanny her first break, and Laura Kyro is terrific as Fanny's worried but proud mother, Mrs. Brice.

Similarly, the costumes (also designed by Bell) are a lot of fun, particularly in the big Follies numbers like "His Love Makes Me Beautiful" and "Rat-Tat-Tat-Tat." Nevertheless, it takes a herculean suspension of disbelief to imagine Lippert's minimalist set as the sumptuous Follies. Meanwhile, the chorus, usually so good at Stray Dog, suffers the occasional misstep in the dance numbers, often sounding tinny and vocally disorganized.

Funny Girl is a rare misfire for this scrappy little company, which is certainly capable of staging big ensemble musicals. (Witness: Cabaret.) But Funny Girl? If it's not Barbra's forever, it's certainly proven more than Stray Dog can chew.