Review: The LaBute New Theater Festival at the Gaslight Theater 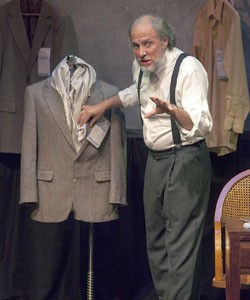 Now in its second year, the LaBute New Theater Festival continues to show promise as a showcase for new works by both emerging and seasoned playwrights. Presented by the St. Louis Actors' Studio, the festival places strict requirements on its submissions. Plays must have no major set changes. They must have no more than four characters, and they must run no more than 45 minutes. The idea is to highlight the most essential aspects of dramaturgy: character development, dialogue and plot.

Given these parameters, it's unsurprising that three of the five works from the first part of the festival, which concluded last Sunday, follow a similar conceit: Two characters, placed in an intimate setting, reveal the secret that brings them together. The festival is as fascinating for the plays that don't quite work as for the ones that do, and as a general rule, the productions that limit their scope to an essential conflict are more effective than those with greater dramatic ambitions. 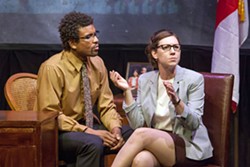 Some, like Thomas Pierce's Blue Lagoon, a funny work about government surveillance and robots, are lighthearted takes on serious issues, as Russell (B. Weller) negotiates with Alice (Jenny Smith), his government-issued minder. Others, like Neil LaBute's Here We Go Round the Mulberry Bush or Jan Henson Dow's I Want to Show You Something, both meditations on sexual predation, are deadly serious. Known for films like In the Company of Men and Nurse Betty, LaBute keeps it simple in Mulberry Bush, as Kip (Reginald Pierre) orders child molester Bill (William Roth) to stay away from his family. Meanwhile, I Want to Show You gets bogged down with far-flung melodramatics as Mrs. Spencer (Emily Baker) tells Dr. Fisher (Chopper Leifeit) about the fallout she suffered (and caused) after being molested by her music teacher.

The outlier here is Steve Karp's Rubbas, an inscrutable work about a Mississippi senator (Weller), his chief of staff (Pierre), a USAID operative (Baker) and the fate of a Mississippi rubber plant. The three-scene work has some interesting moments, but it tries to do too much with too little. At the other end of the spectrum is the standout from the festival's first half: Aleks Merilo's Little Moscow, a charming one-man play where a tailor (G.P. Hunsaker) tells a bit of his life story.