Review: The Addams Family at the Muny 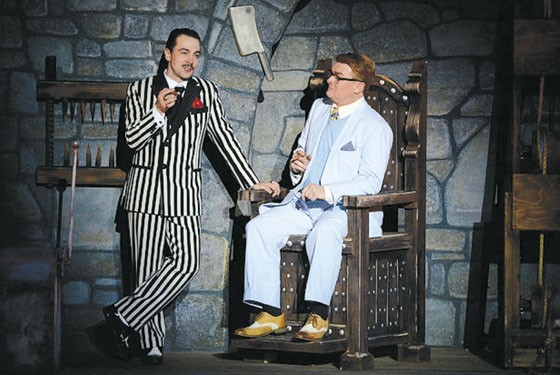 Of all the surprises that come bubbling to the surface in The Addams Family, the rambling, crowd-pleasing, knowing musical that opened this week at the Muny, perhaps the biggest shocker is this: Gomez Addams, that patriarch of the morbid, just wants his little Wednesday to find a nice young man, settle down, and be happy.

That's right, folks, as US Weekly would put it: America's First Family of the Macabre Is Just Like Us!

Yes! But probably not in the way Charles Addams, whose ghoulish cartoons first appeared in The New Yorker in 1938, would have intended. Of course, like any good monster, Addams' baby has grown well beyond its creator's initial design. It's become a brand, inspiring a television series, movies, action figures and countless tchotchke.

In this latest franchise, with music by Andrew Lippa and a book by Marshall Brickman and Rick Elice, we find the Addamses starting at their ghoulish best, with Wednesday (Sara Kapner) slaying a petting-zoo goose for dinner and torturing little Pugsley (Michael Harp) on the family rack.

But Wednesday has a secret. She's all grown up now, and she has decided to marry Lucas Beineke (Dan DeLuca), a rambunctious Ohioan of milquetoast stock. But first the families must meet, and Wednesday implores her zany clan, headed by Rob McClure as Gomez and Jenny Powers as Morticia, to act "normal" when they host the square Beinekes. 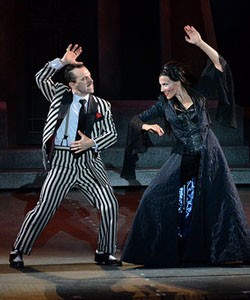 "Normal is an illusion," Morticia, dressed in a sheathlike black gown, tells her daughter. "What's normal for the spider is a calamity for the fly."

Directed by Marcia Milgrom Dodge, what ensues, on the other hand, can only be described as normal, as the Addamses realize they're not so strange as they'd imagined, and Lucas' parents, Mal (John Scherer) and Alice (Hollis Resnik), aren't quite so normal as they'd thought.

Filled with some very funny one-liners ("Do you have a little girls room?" Alice asks. "We used to, but we let them all go," Gomez replies), the show loses focus as it takes off in multiple directions, with a banjolele-playing Uncle Fester (Steve Rosen) confessing he's in love with the moon, and Grandma (Jennifer Cody) admitting she has some 90-year-old hotties waiting to "chow down on a grandma sandwich."

The cast is very good and there are some nice numbers, as when Wednesday sings "Pulled," a song about becoming normal while torturing her brother on the rack, Fester's lovely "The Moon and Me," or Gomez's heartfelt "Happy Sad." Still, a musical lives or dies on the quality of its songs, and The Addams Family simply does not have many that really stay with you.

Where the show does succeed, however, is in its humor (one of Grandma's potions, Acrimonium, "takes the lid off the id"), and striking visuals — Michael Schweikardt's set design and Andrea Lauer's costumes are simply terrific. Funny but cynical, the show often references the campy conventions of musical theater with characters asking the audience if it's a good idea to end an act, and summoning dance numbers from the chorus of Addams family ancestors.

In that sense, The Addams Family isn't shy about its cotton-candy desire to entertain. It doesn't try to be anything it's not, and sometimes that's enough.