Sometimes the message the world needs to hear isn't delivered by political leaders or big-name activists. No, sometimes the wisest, simplest words of peace and equality come from a six-year-old St. Louis girl in sparkly red boots.

Having internationally acclaimed vocalist Cyndi Lauper and the cast of Kinky Boots agree is just a bonus.

Harlow Rosenberg is a precocious child who loves robots, princesses, fashion and the award-winning musical Kinky Boots. After hearing the soundtrack about a shoe-factory owner who hopes unconventional footwear will save his business, Harlow became quite taken with drag queen Lola, one of the main characters who shares that she's had trouble getting acceptance from her father. A budding artist and YouTube star, Harlow drew a picture of Lola and filmed a special message, asking her dad Noah Rosenberg to send them to the character. In her video, Harlow says, "No one can tell you. You don't have to decide what they say. You can decide for yourself. It's your life!"

Rosenberg tweeted the drawing and video to Billy Porter, who plays Lola in the Broadway musical. Porter applauded Harlow and shared her art with his Twitter followers:

Porter was so taken with Harlow that he shared her video again months later:

The excitement didn't end there. Rosenberg's wife was gearing up for a business trip to New York City, so the family tagged along for a vacation and for a viewing of Kinky Boots. Once again, Harlow asked Rosenberg to send a message to Lola, sharing that she'd be visiting her soon and wearing her "Lola" dress. To Harlow's delight, Porter responded enthusiastically.

"He's tweeted her a bunch of times -- pretty much anytime Harlow has a message," says Rosenberg, who is cofounder of local digital agency Happy Medium.

In New York, Harlow enjoyed the sights before it was time to dress for the theater. The six-year-old girl showed off her flair for fashion with an outfit straight out of Lola's closet -- a fancy scarlet dress and red glittery knee boots -- and the family headed to Kinky Boots, where Harlow knew every word of every song.

"Oh, man, I remember just looking over at her face, and it was like if you saw a real-life Tinkerbell fairy," Rosenberg says. "She couldn't believe it was actually happening and that she was actually there. She just kept jumping up and down in her seat.

"At the end, they have an old-style revue where the cast comes out and disco music is playing," Rosenberg continues. "I lifted Harlow up, and the guy who plays Charlie [Andy Kelso] pointed at her and said, 'There she is!'"

She's the best! Tell her I'm a huge fan! "@nrose: @KinkyBootsBway here's the photo of her at the show! pic.twitter.com/2NeDGq7yNO"

Afterward, Harlow and her family waited for the cast near the stage door, finally meeting Porter and other actors. Harlow was a little nonplussed seeing cast members in ordinary clothing instead of costumes, but there was still a surprise or two in store for the little theater lover.

Days after the family returned to St. Louis, Cyndi Lauper discovered Harlow's video. Cheering for Harlow's message of acceptance and equality, the "Girls Just Want to Have Fun" singer and the songwriter behind Kinky Boots left a comment on the video and then shared the link on her Facebook page. 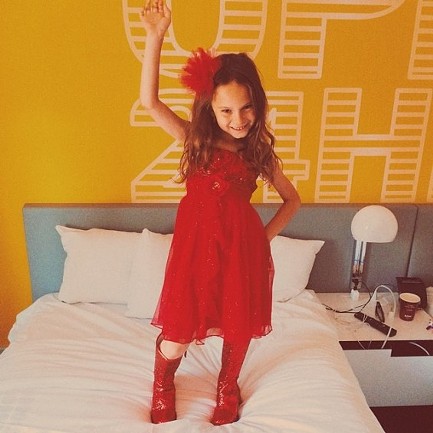 Naturally, Lauper's endorsement has encouraged her fans to watch and praise Harlow's video -- Harlow's message now has 24,000 hits and counting. Coupled with a writeup from Broadway giant Playbill and countless social-media shares, Harlow has become known as the girl who "gets it."

"To her, gender roles aren't as defined. There's nothing wrong with any of this; she gets it," Rosenberg says. "She's just like, '[Wearing fun dresses is] what he [Lola] likes, and that's what I like, so we're friends. Why would his dad tell him he can't like that?'"

After all of this, it's easy for a little girl to assume that she can reach anyone through social media. As a summer project, Harlow has been watching videos of famous women like Lucille Ball, Anne Frank and of course Cyndi Lauper before drawing the ladies, asking her father to share her work with her subjects when possible.

"She thinks that I can just talk to anybody at any time now," Rosenberg says. "I can't imagine how this kid thinks life works. She says something like, 'You create your own reality' in the [Kinky Boots] video, and I think she believes that."