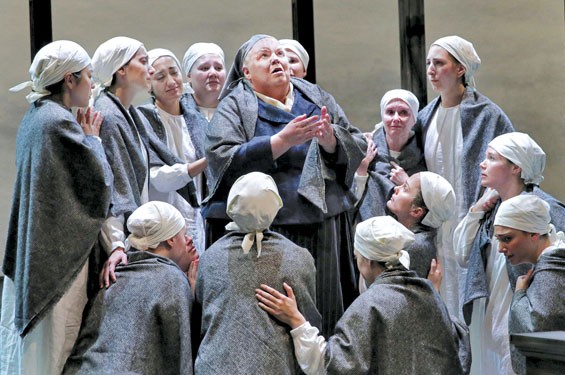 In the crowded field of operatic death scenes, perhaps none is more devastating than the finale of Francis Poulenc's The Dialogues of the Carmelites, as sixteen nuns, having taken a collective vow of martyrdom, march to the guillotine in the waning days of the French Reign of Terror. Many productions have taken a subtle approach to the wrenching denouement of Poulenc's master work, as the contemplatives, their voices joined in the soul-shaking hymn "Salve Regina" (Hail, Holy Queen), head offstage one-by-one to be silenced by the swoosh of the executioner's blade.

In Opera Theatre of Saint Louis' superb staging of Poulenc's tragic opera, however, director Robin Guarino has done away with these offstage subtleties. Here the Carmelites, their faith affirmed, meet their death in full view of the audience. It is a deeply affecting directorial choice, perhaps heavy-handed, that offers an explicit view unto the martyrs' internal state, leaving the audience breathless before swelling to a tsunami of applause.

First performed in 1957, Dialogues tells the historical tale of the Carmelite nuns of Compiègne, women who were put to death on vague charges that they sympathized with the aristocracy. It is an opera of big ideas, wrestling as it does with questions of faith, sacrifice, fear and grace. It was also quite a departure for the composer, who had previously written lighter works, but here punctuated a rich and haunting tonality with sharp moments of modernity, as when the aurally violent guillotine repeatedly crashes through the sacred "Salve Regina."

Seeking refuge from the tumult of the outside world, Blanche joins the austere Carmelite order, where the ailing prioress, Madame de Croissy, is skeptical of Blanche's motives. Played with extraordinary physicality by the fine contralto Meredith Arwady, the prioress warns Blanche that the order cannot protect her; rather, it is she who must protect the order. Arwady has a magnificent stage presence, and her powerful voice is marvelously varied — deep and authoritative as she tests Blanche's motives, suffused with resentment and raw terror when, during her convulsive death scene, she feels abandoned by the God she has served.

Shaken by the prioress' lack of faith, Blanche befriends the ebullient Sister Constance, who assures her the prioress' death was unfitting for a woman of her faith. Played by the remarkable soprano Ashley Emerson, Constance wonders whether Madame de Croissy received the wrong death — like being given the wrong cloak from a cloakroom — and whether someone else will therefore get the easy death the prioress deserved. Emerson is a fine stage actress with a bright, lilting voice that is well suited to this from-the-mouths-of-babes role. An enthusiastic innocent who pines for the distractions of the secular world, she prophetically tells Blanche that perhaps we do not die alone but rather for each other, and that she believes they will die together — young and on the same day.

Rounding out this ensemble of strong female vocalists is the terrific mezzo-soprano Daveda Karanas in the role of Mother Marie, who, after the prioress' death, proposes they take a vow of martyrdom instead of giving up their faith. She is joined by the estimable soprano Christine Brewer, who, in the role of Madame Lidoine, leads the Carmelites as the new prioress. But even the imposing Madame Lidoine — here given added authority by Brewer's rich, immaculately controlled voice — is unable to assuage Blanche's fears. Realizing the convent cannot provide her refuge, Blanche flees her sisters, returning to the home of her murdered family where she works as a servant to her former domestics.

Played out against Andrew Lieberman's austere yet flexible set, this powerful work is brought to life by members of the Saint Louis Symphony Orchestra. Under Ward Stare's baton, the players, who occasionally overpower some of the vocalists, lend an existential urgency to the opera, as Blanche realizes her worst nightmares.

By facing her fears, however, Blanche also overcomes them. As she finally joins her sisters at the scaffold, singing the beautiful sacred hymn "Veni Creator Spiritus" (Come Creator Spirit), a look approaching ecstasy descends upon her face as the blade falls.

Dialogues of the Carmelites